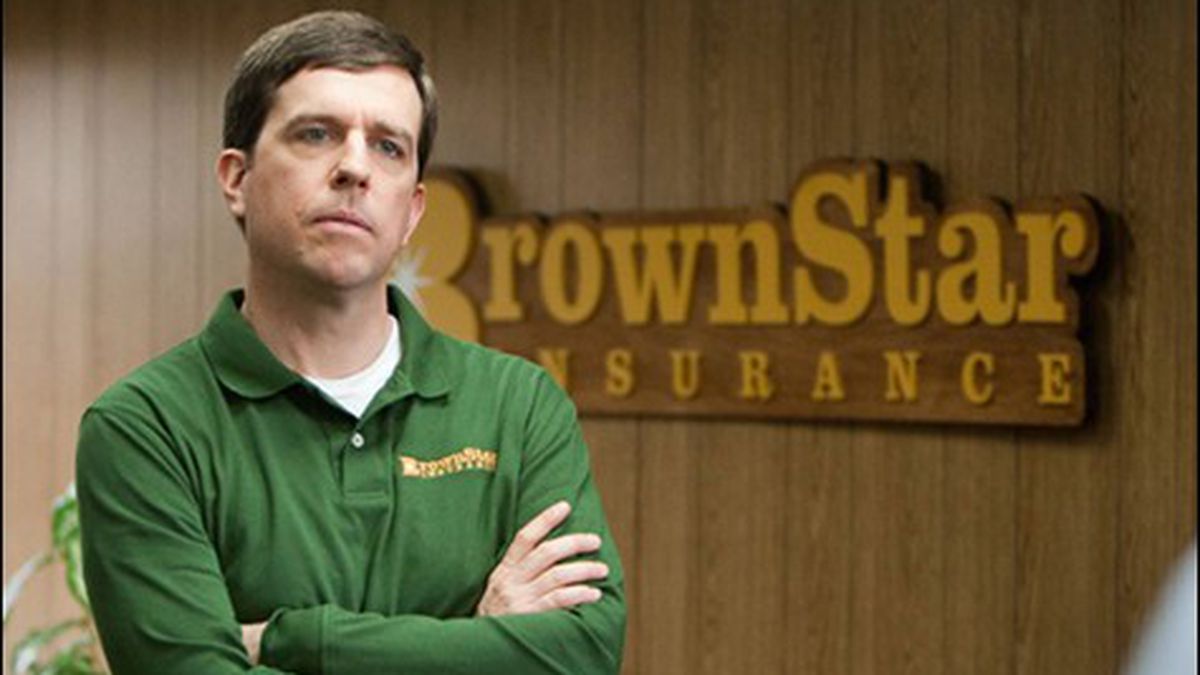 Insurance-agent conventioneers and Roman legionnaires on a rampage.

When you give a movie a title like Cedar Rapids, you open up an entire mountain range of assumptions based on the name alone. Or, more appropriately, a cornfield of assumptions. Or a grassy prairie.

For instance, if filmmaker Miguel Arteta were to make a comedy about an innocent, gullible, small-town insurance agent who gets into unexpected trouble at a convention, he might call it The Stooge, or The Jerk, or Mr. Lippe Goes to Town. Never mind that those titles have already more or less been used before — we’d know immediately what we were up against.

But by choosing Cedar Rapids, director Arteta and screenwriter Phil Johnston suggest something more ambivalent and ambitious. The simple place-name title is too sweeping. Sounds pretentious and all-knowing. At first we fear this might be another Grand Canyon-style survey of the hopelessness of modern life in the United States.

After calming down, we realize Cedar Rapids belongs in that lengthy, impersonal list of films that have used Midwestern locations in their titles: Fargo, Dodge City, Wichita, Bloomington, Kansas City, Chicago, Sioux City, Meet Me in St. Louis, etc. Not knowing much about the movie, we could expect anything from a dour social-problem pic about deserted main streets, abandoned farms and factories, Wal-Marts, and meth labs — one possible vision of today’s Midwest — to the old-fashioned, corny-but-reliable view of Flyover Land as a place populated by well-meaning but befuddled yokels. Cedar Rapids is the latter kind.

Yokels don’t come much more well-meaning and befuddled than Tim Lippe (played by Ed Helms), a very junior insurance salesman at Brown Star Insurance in Brown Valley, Wisconsin. Mild-faced Tim, who favors patterned sweaters and sensible slacks, seems to have absorbed the Insurance Agent’s Handbook along with his earnest good-naturedness and eagerness to please. So what if bachelor Tim has a little sex thing going with his former high-school teacher, Macy Vanderhei (Sigourney Weaver)? And so what if Tim’s shifty-eyed boss, Bill Krogstad (Stephen Root), suddenly orders him to Cedar Rapids, Iowa, on an important mission: to attend an insurance convention and win the all-important Two Diamonds award? Why all the urgency about that?

We’re prepared for Tim to go bonkers at the convention, to get drunk and make a fool of himself, maybe mess around with a prostitute and get stoned on dangerous drugs, to embarrass himself in front of the top insurance official, and so on. All of that does indeed happen, but the key to this slender but inescapably charming comic character study is Tim himself.

Once we process the news that Tim has never flown in an airplane, much less traveled outside his hometown, other facets of his essential out-of-it-ness begin to make sense: the sobriety (root beer for him, thanks), the religiosity (where he comes from, insurance agents hold prayer breakfasts), his faith in fixed annuities, etc. Also the fact that Tim isn’t exactly setting the world on fire career-wise. But he’s a genuinely nice guy, and by all indications a serial monogamist. So when he lands in the title town and experiences it as if it were Las Vegas, we laugh with him as well as at him.

Actor and comedian Helms, of TV’s The Daily Show with Jon Stewart and The Office, relies on a similar set of character traits for Tim Lippe, with a dash of stablemate Steve Carell and echoes of a pair of other comic Tims, Allen and Conway. But the entertainment property Arteta and his cast most often refer to is another Ed Helms movie, The Hangover.

Cedar Rapids is The Hangover for squares. Pile on John C. Reilly and Isiah Whitlock Jr. as “wild man-quiet man” corporate suite-mates, Anne Heche as Tim’s red-haired convention fling, Alia Shawkat as the hotel hooker, and the always dependable Kurtwood Smith as the sanctimonious insurance industry honcho, and we’re in business. The only things missing are Mike Tyson, a crazy Chinese gangster, a wild animal, and a lost baby. What do you want — this is Iowa.

Cedar Rapids lacks the ironic bite found in the work of one of its producers, filmmaker Alexander Payne, but the subtle comic touches of perceived “Midwestern life” are the same ones we admired in such films as About Schmidt and Citizen Ruth. If director Arteta (Youth in Revolt) is guilty of damping down the nastiness lurking just beneath the loud sweaters and hotel bars of the Midwest, he’s at least generous with Tim’s essential sweetness. Tim’s default exclamation is that favorite of airheads everywhere, “Super awesome!” He says it so much we can see he’s really trying to convince himself that everything will turn out right. And it will. If not in Cedar Rapids, then maybe back home in Brown Valley.

Is The Eagle an allegory on the current Central Asian petro-wars? Maybe so, but there are other things to talk about with Kevin Macdonald‘s well constructed historical adventure, the latest in the chain of Roman Empire-costumed crowd-pleasers that began with Gladiator.

For one, director Macdonald (a documentary maker and grandson of renowned British producer Emeric Pressburger), screenwriter Jeremy Brock, and novelist Rosemary Sutcliff see to it that legionary officer Marcus Aquila (Channing Tatum) pays attention to the telltale details of ancient Roman life, like burning an offering to his lares and penates — ancestral household deities — before embarking on a commando mission into Scotland to rescue the golden-eagle standard of his late father’s Ninth Legion, circa 140 CE. That body of imperial conquerors marched out and vanished, no doubt having tangled with fierce locals (shot on location in Scotland and Hungary) such as the Seal People of the North, who paint their faces and dance like Native Americans.

If we’re forced to choose one contemporary Romans ‘n’ barbarians movie, this is the one. The lines are not unbearably stupid, the Picts are appropriately savage, and there’s the presence of Donald Sutherland as Marcus’ uncle. Now somebody please explain the infinity pool at the Roman villa in Britain. Fittingly, it’s Guern (played by actor Mark Strong), a grizzled survivor of the Ninth Legion massacre, who offers a link to present-day overseas campaigns. Speaking of the rugged countryside beyond Hadrian’s Wall, Guern observes that there’s nothing here worth taking, but that they always have to push on and have more wars. The eternal soldier’s complaint.

Bobby Seale Discusses A History Of Resistance At Oakland Museum of...