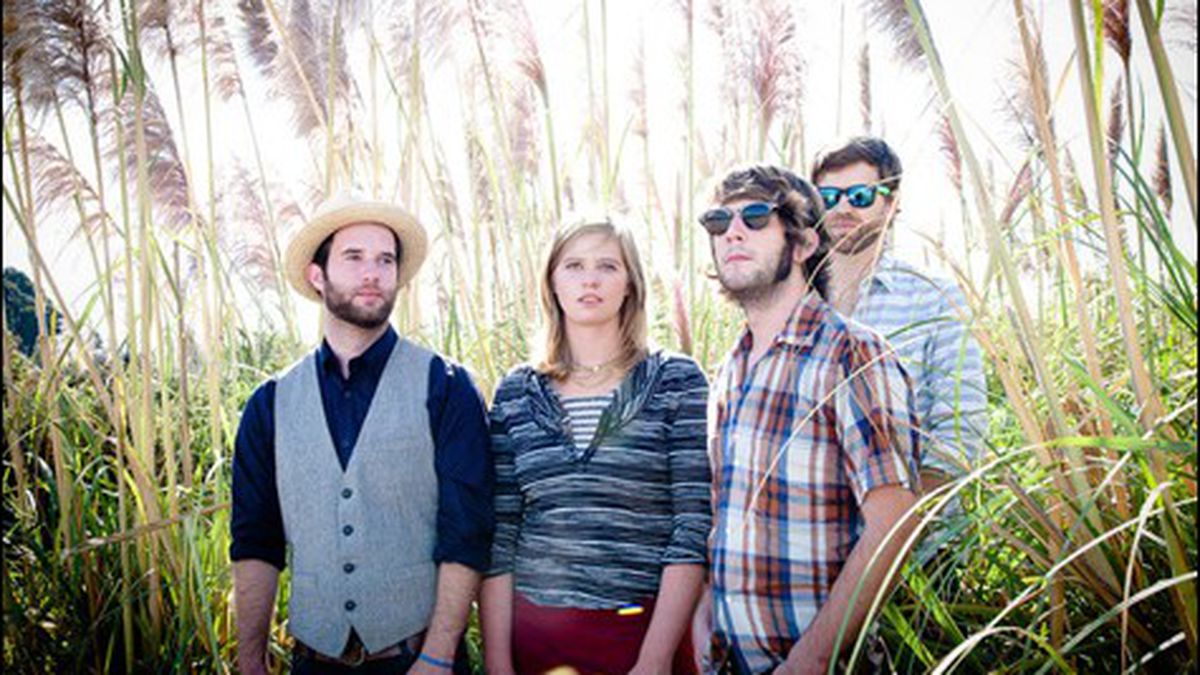 We recommend the best local bands to check out this season.

If you’ve lived in Oakland long enough, chances are, you’ve run across Ryan Parks — B. Hamilton’s frontman, songwriter, and all-purpose id (plus, full disclosure, erstwhile Express “etiquette” columnist, emphasis on the scare quotes): He’s the tall guy at the warehouse/bar/party with a beer permanently affixed to his hand and a theory of some kind constantly leaving his mouth; or the one semi-indecipherably singing-screaming into a mic at any one of the band’s seemingly constant local gigs; or, ah, expressing himself to absurdist, all-capped excess all over the internet. And, truth be told, if Oakland’s music scene needs a hero, we could do a lot worse than Parks — an Anaheim native who’s taken to the city with an immigrant’s zeal; a remarkably inventive musician who manages to make reverb-heavy rock ‘n’roll, that most played-out genre, his own; an equal-opportunity class clown whose music is, actually, underneath it all, viscerally, gorgeously honest, and whose live show is just plain visceral. B. Hamilton’s newest single, “Stupid as the Sun,” is a slow-burning testament to the power of melody and mania in equal measure, the kind of song that builds and breaks so many times in six minutes you need to listen again just to figure out how they did it. See Facebook.com/B.HAMILSTAN for upcoming shows. — E.C.

To watch Loma Prieta from the sidelines is to watch fans screaming, thrashing, and reaching, eyes and fingers stretched wide-open like they’re experiencing the Second Coming. This die-hard evangelism is typical of hardcore, but Loma (which formed in San Francisco in 2005) happens to be one of the few local acts that’s developed a worldwide following. And for good reason. Even those uninterested in screamo as a genre can’t deny the complexity of Loma Prieta’s elastic vocals, a series of melodic tones that mount with the screeching feedback of the guitar and the whirring interplay with drummer Val Saucedo’s sometimes surprisingly delicate percussion. It’s also — emo labels aside — genuinely a starkly emotional outpouring — even to those unable or unwilling to brave the frontlines to show their devotion. See Loma-Prieta.com for upcoming shows. — A.G.

When the nineteen-year-old Berkeley rapper 100s dropped his debut album Ice Cold Perm last year, he seemed to come out of nowhere, but his collaborators — Main Attrakionz, Shady Blaze, Chippy Nonstop, and Ryan Hemsworth — indicate that he’s already in with the right people. Spin called Ice Cold Perm “snarling, no-nonsense pimp-rap,” and with booty-bouncing tracks like “1999,” it’s the type of album that should be blasted from a vintage car cruising on a hot summer’s day. 100s is set to release an EP this summer on A-Trak’s label Fool’s Gold, plus a follow-up to Ice Cold Perm, tentatively titled Sex Symbol, that should be out before the end of the year. 100s said he’ll definitely be playing local gigs this summer, though there are no confirmed dates yet. See ihate100s.tumblr.com for upcoming shows. — W.P.

Ash Reiter has paid her dues since picking up a guitar in 2005 during her senior year at UC Santa Cruz. She’s toured extensively, both solo and with her band, and produced an EP and two full-length albums — most recently HOLA, which Express critic Mark Keresman called “an original work” inspired by power pop and Sixties pop-soul. HOLA is the perfect soundtrack for a summer day in the Bay, one in which a cool breeze or fog bank may roll through at any moment. Reiter is, at her core, a singer-songwriter in the folk tradition, but she has enough creativity to keep it interesting, especially in her haunting, angst-ridden live performances, in which she’s backed by drummer Will Halsey (her boyfriend and former Wave Array member), bassist Scott Brown, and keyboardist Anthony Ferraro. Reiter has earned comparisons to Dusty Springfield, Rickie Lee Jones, and Cat Power for her soaring, hypnotic vocals that imbue each song with a certain longing — a feeling that she’s searching for something, which, much like her genre-shifting music, defies easy explanation. Catch Reiter at a number of local shows this summer, including The Starry Plough (3101 Shattuck Ave., Berkeley) on Friday, June 14, and A Fair to Remember in San Francisco’s Jack Kerouac Alley on Sunday, June 16. AshReiter.com — W.P.

Among the many local bands that churn out catchy jangle pop, The Mantles has differentiated itself by keeping it sharp and serious rather than coy and cute. Following its much-celebrated self-titled debut in 2009, the quartet returns with an even crisper, more urgent sound on its forthcoming album, Long Enough to Leave, which will be released by Slumberland on June 18. Those who fell in love with the band’s shambling, breezy style — often compared to the bittersweet psych rock of early Love albums — will be glad to know there’s still plenty of gritty guitars and mid-tempo surf grooves. First single “Brown Balloon” demonstrates that The Mantles still savors a sweet melody, and “Hello” is chaotic garage-pop at its most danceable, but all the new material seems tighter, including the songwriting and structure. The band is known for its solid live performances, as members interact with one another and the audience without ego or gimmickry, relying wholly on musicianship and improvisation to make each show memorable. Be there for The Mantles’ record release show at Rickshaw Stop (155 Fell St., San Francisco) on Friday, June 14. TheMantles.tumblr.com — W.P.

Yusef Wallace has been listening to death metal since middle school, but the 26-year-old Oaklander didn’t think to write music or pick up a guitar himself until 2008, when he heard a Celtic Frost song that he thought sounded easy enough for him to learn. Shortly thereafter, he formed Rude, and though the lineup has changed since then — it now consists of drummer Tony Lopez, bassist Michael Perata, and guitarist David Rodriguez — the band seems to finally be hitting its stride. It released a demo tape in February, and it’s surprisingly good for a young band, boasting a classic death metal sound that even earned the respect of Pestilence guitarist Patrick Mameli, who provided the lead on “Haunted,” one of the demo’s catchiest tracks. In fact, you can hear a lot of early death metal influence in the band’s fast tremolo picking, guttural vocals, and raw production. Rude may be emulating its idols for now, but it’s quickly gaining fans of its own. The band has several gigs lined up for the summer, including the Continental Club (1658 12th St., Oakland) on May 30 and August 9, San Quentin Prison in early July, and a tour with Olympia, Washington’s Bone Sickness, also in July. RudeDeathMetal.Bandcamp.com — K.R.

These days, there seem to be far too few bands whose music makes you — forces you — to sit upright in your chair and listen. WATERS is one of them. Led by Van Pierszalowski (formerly of Port O’Brien), the San Francisco band makes impassioned rock that’s loud, catchy, and life-affirming (in the least clichéd sense of the term), in addition to some contemplative ballads. This was entirely on purpose, as Pierszalowski said he was seeking a big sound that would reinvigorate his love of music after time spent away from it. Live, the band is intense but also personable, making it even easier to like. According to the band’s publicist, WATERS will play some shows in the late summer, and will release a follow-up to its debut, Out in the Light, this fall. We can’t wait. See ThisIsWaters.com for upcoming shows. — K.R.

New San Francisco punk outfit Pang has been something of a one-hit wonder in the very best possible sense. With only a seven-inch out (featuring the rollicking garage punk track “Attention Deficit”), the all-girl quartet has cemented its status as a local “band to watch.” In the last year, Pang has played dozens of shows (sharing the stage with fellow rockers Shannon and The Clams, Crystal Antlers, and Lenz), and slowly secured a strong fanbase with its blessedly energetic guitar work, Stereolab-esque keyboards, and fierce-yet-melodic shouting harmonies. Given Pang’s self-professed restlessness, and the extreme likelihood that this summer may be the one the band is catapulted to wider fame, it’s going to play a number of summer shows, the next on Saturday, May 25 at The Night Light (318 Broadway, Oakland). PangBandSF.bandcamp.com — L.C.

There’s something charmingly self-deprecating about all the weary love songs penned by singer-songwriter Chris McVicker, aka Swiftumz. In fact, McVicker seems to possess an intuitive knack for blending sincerity with the faintest trace of cynicism. What’s more, he backs it all up with impeccably catchy, garage pop songwriting that would impress even Brian Wilson. I love her even more than I hate myself, professes McVicker in a Stephin Merritt-style croon on “More Than Sleep,” from 2011’s Don’t Trip, which also features the standout chorus: I can still remember that perfect sunny day when I said, ‘L-O-V-E-Y-O-U-4-E-V-A.'” This summer should prove to be especially productive: Swiftumz plans to release a handful of seven-inches and play a few Bay Area shows with a rotating cast of musician-friends. See Facebook.com/pages/Swiftumz/136749736372949 for upcoming shows. — L.C.