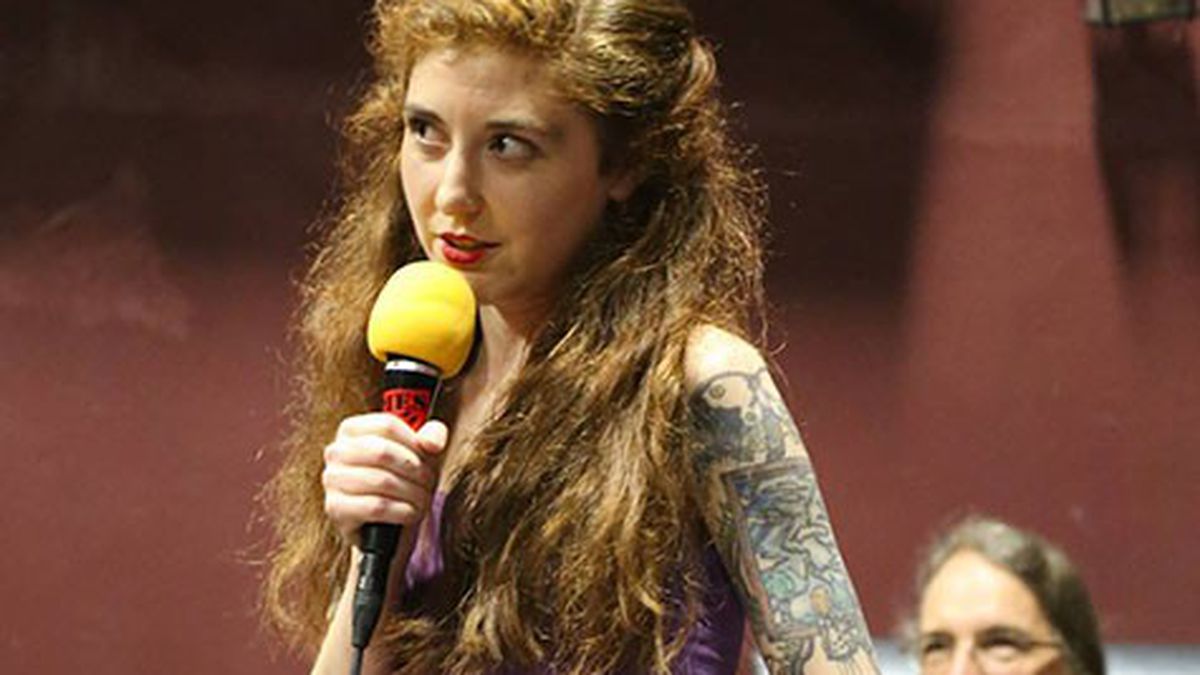 Stick a Fork in Alexandra Naughton

In her newest book, the local poet reflects on the complicated relationship between success as an alt-lit author and self-objectification on the internet.

At approximately 10 a.m. on June 25, East Bay poet Alexandra Naughton posted one of her poems on her Facebook timeline. By 1 p.m., it had received ten likes and two comments. At approximately noon, she uploaded a pair of bathroom mirror selfies with the caption “#sext: wearing these high-waisted jeans and I feel like my mom in the 80s.” By 1 p.m., the post had received 59 likes and twelve comments. At around 1 p.m., she posted a status that read, “I need to start posting poems on my selfies.” A friend commented, “I do that [because] people always like my selfies more than my poems.”

Naughton is an “alt-lit” poet, a label that began gaining popularity around 2011 and is reserved for young writers whose work is primarily published on the internet. Alt lit also refers to internet culture through linguistic style or content or both. For alt-lit authors, live readings remain important, but not as important as maintaining an alluring social media presence. For some authors, their poetry is arguably indistinguishable from their online personalities, extending into every expression and self-characterization that they present publicly.

Naughton is best known for her debut book I Will Always Be Your Whore: Love Songs for Billy Corgan published by Punk Hostage Press in 2013. It’s an intensely personal collection of poems that reflect on the complex dynamics of an abusive relationship. Naughton received acclaim for the book, and along with it, an increase in attention from strangers online — often in the form of creepy messages. It was clear that she had become an object of affection for fans who felt they knew her intimately because they read her poetry and followed her life through her seemingly candid social media.

Naughton recently published her second book of poetry from Punk Hostage entitled You Could Never Objectify Me More Than I’ve Already Objectified Myself, largely inspired by that bizarre relationship with strangers over the internet. But rather than simply critiquing internet objectification, Naughton readily acknowledges her own role in it — after all, being popular online is crucial to her success. The second page reads, getting myself off thinking about you dreaming about me/I posted that on tumblr/fifteen minutes later my only fan texted me/’I jerked off to your photo on HTMLgiant’/I am an alt lit superstar.

Dismissing the myth of poetry as precious self-expression outside of capitalism, Naughton’s writing consistently reflects on the mechanisms behind it. In You Could Never Objectify Me, Naughton points out that as soon as she publishes her intimate thoughts, they — and she — become commodities to be consumed. “I do make myself a product, but so do so many other people on the internet,” she said recently in a video chat. “This is what we have, this is what we’re working with.”

Naughton’s reaction to feeling objectified is to intensify that simplification of her personality to the point of absurdity, packing on perceived vulnerability until it becomes a deflective shield. “Before you can decide how weak I am, I’m just going to completely skewer myself so that you can’t do that to me,” she said. “Here I am just completely embarrassing myself or exposing myself so that you can’t.”

Instead of a reading, the recent release party for the book was a “roast” at Studio Morey in Oakland, in which a comedian mocked Naughton in front of a crowd. Leading up to the event, another female writer criticized Naughton for her willingness to objectify herself. In response, she updated the event page on Facebook with a video of herself taking selfies with an apple in her mouth — like a ham ready to be devoured. Soon after, she changed her profile picture to one of the resulting selfies. “Stick a fork in me, I’m used to it,” the caption read.

Secret Staircases to the Past