The local poet, playwright, actor, and scholar brings tales of Black life and struggle to the stage with her theater troupe, the Lower Bottom Playaz. 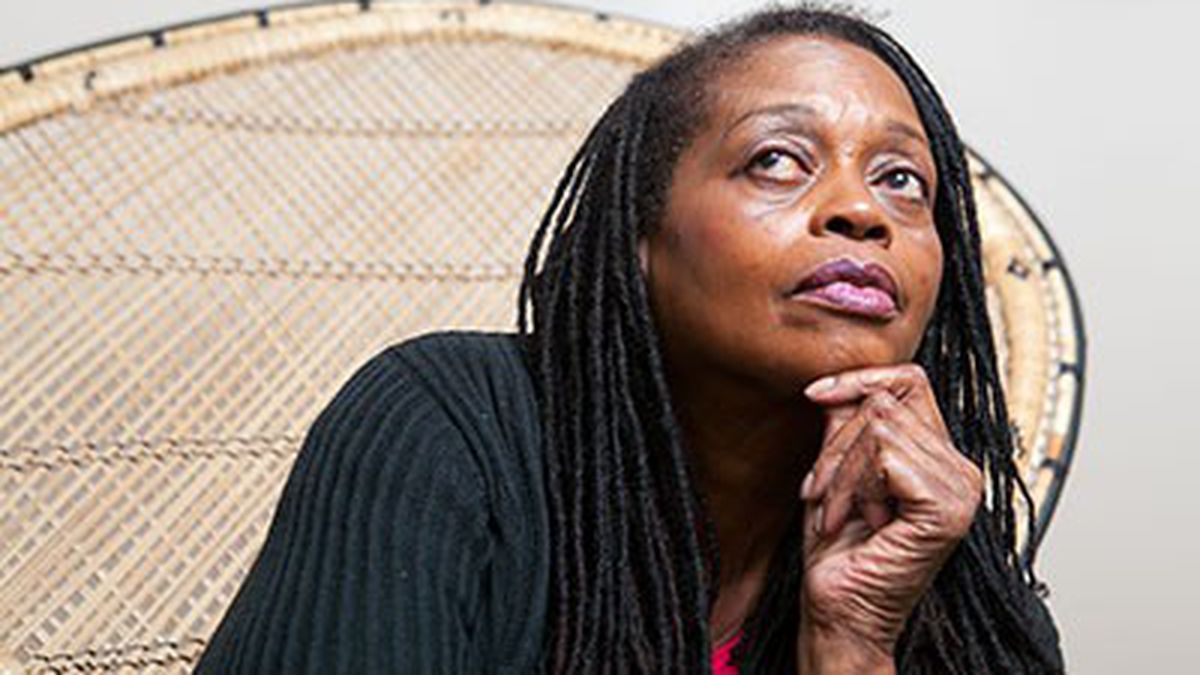 The stories that Ayodele Nzinga chooses to tell through theater often overlap with real life in troubling ways. At a recent reading of Zara’s Faith, a play by Marc Sapir that Nzinga is considering for stage production later this year with her theater troupe, the Lower Bottom Playaz, reality couldn’t be fully suspended for the sake of performance. Before commencing the reading, Nzinga explained to the audience, in prefatory remarks, that the morning before, a man was shot dead by the police near Lakeshore Avenue after falling asleep in his car. The man, Demouria Hogg, was the father of a little girl whose close friend is the daughter of Cat Brooks. Brooks would shortly be taking the stage as Zara, the title character, explained Nzinga. And since Zara’s Faith is a play about Black America’s struggle against police violence, said Nzinga — the plot centers on the murder of Zara’s grandson by a corrupt officer — this dark preternatural convergence between the script’s fiction and the real world couldn’t be denied.

All of Nzinga’s art is like this. An actor, playwright, poet and producer, her work is deeply personal and political, but not in an individualistic sense. Her productions spotlight marginalized peoples, telling stories about threatened communities, often written by artists who themselves are pushed to the edges of American theater. Her work is boldly Black, speaking to what she calls the North-American-African experience. Telling the stories of Black lives on stage isn’t an idle exercise for Nzinga.

“We taught the world how to struggle,” Nzinga said in an interview. “The North American African is the canary in the coal mine. If we can change the system, it’ll benefit everyone.” Change being the goal, Nzinga’s work has been characterized as “message” theater, and at times one can feel a little beaten over the head by the political ideas pouring forth in dialogue and soliloquies. But in a place such as the Bay Area, where even overtly political forms of art often have the effect of comforting relatively privileged audiences by providing a reassuring experience of moral solidarity, the messages embedded in Nzinga’s works are purposefully designed to discomfort those audiences, even to indict them in the wickedness playing out on stage. The result is a refreshingly blunt earnestness.

Nzinga began directing theater while she was a student at Laney College in the early 1980s. Marvin X, the prolific Black Arts Movement intellectual, was her teacher at the time. Both had struggled with drug addiction, a social symptom of Black Oakland’s economic marginalization. “Marvin walked into the room one day and tossed this script into my hands, and said, ‘Direct this,'” recalled Nzinga. “That was the first time I directed a play.” The play was One Day in the Life, the classic “Recovery Theater” production about addiction and abuse, but more so about the sociological roots of trauma in Black communities struck by centuries of racism and more recent ailments like Reaganomics and mass incarceration.

“One Day in the Life gave me ways to understand what my own problem had been, and ways to heal myself,” said Nzinga. In 1999, Nzinga founded the Lower Bottom Playaz theater troupe to perform both original plays and classics, all adapted for and accessible to the marginalized peoples of Oakland’s flatlands.

“We had no money, we were like a gypsy troupe, baptized in the trenches, doing shows in San Pablo Park, Dolores Park, in homeless shelters,” said Nzinga about the Lower Bottom Playaz’s early days. In hindsight, Nzinga recognizes what they were doing as street theater in the vein of August Boal’s Theater of the Oppressed.

In 2000, Nzinga and the Lower Bottom Playaz moved into the Sister Thea Bowman Memorial Theater, an outdoor stage at the Prescott-Joseph Center in West Oakland. Nzinga began adapting Shakespeare, morphing the Englishman’s tales into dramas set in Black Oakland. In 2006, she saw a production of Gem of the Ocean at the American Conservatory Theater in San Francisco. “It was like eating lobster for the first time,” she said about seeing Wilson’s play. “It was interesting, but I didn’t immediately fall in love with the work.”

Nzinga then read Joe Turner’s Come and Gone, also by Wilson. “That struck a deeper chord,” she said. Over the course of a summer, she went on to read the entire “Century Cycle,” Wilson’s ten plays spanning the 20th century that tell the intergenerational story of a Black community in Pittsburgh’s Hill District.

“Most do Wilson wrong because they do it in a way that makes white people comfortable by adapting the universal elements in it,” said Nzinga. “But Wilson is tragicomic. It’s not supposed to be vaudeville. We get laughs, but it’s never about the humor. We let the audience smile for a moment and take a breath, but then we make them remember how much it hurts.”

In August, the Lower Bottom Playaz will perform King Hedley II, and in December, Nzinga and her troupe will close out the Century Cycle — a stunning accomplishment — by staging Radio Golf. With these productions, life and art once again ensnare one another in Nzinga’s aesthetic universe. Radio Golf is a story of gentrification and the displacement of a Black community set in the 1990s. For the past several years, Nzinga has been struggling with her real life landlord, a large rental property company that scooped up hundreds of houses during the foreclosure crisis several years ago. Nzinga fears being pushed out of the first place she chose to settle in her entire life, a little house in the Lower Bottoms of West Oakland. But all her personal troubles seem to make her art stronger — a more potent diagnostic of the troubles that confront us offstage.