.Standing Up for Gay Comedians

Charlie Ballard, an Oakland-based Native-American performer, will be a host at the massive Gathering of Nations Powwow — and this time, he's doing it in drag. 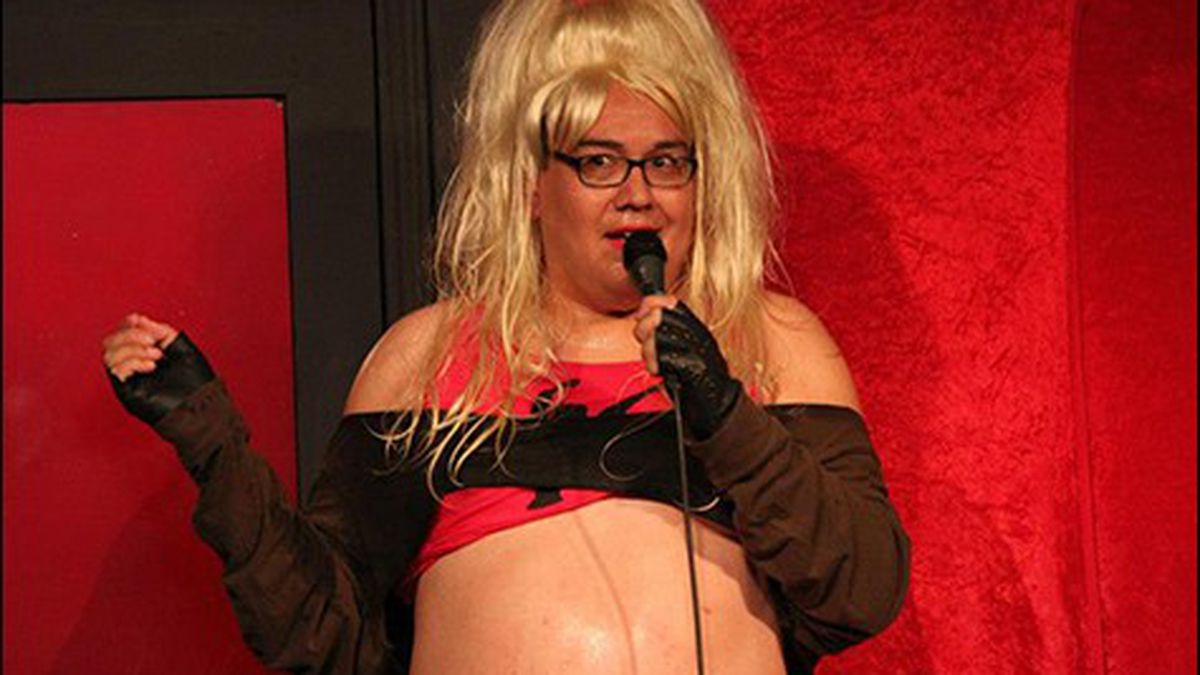 In the world of standup comedy, LGBT performers have the hardest time getting gigs. That’s according to Charlie Ballard, an Oakland-based gay comedian who has extensive experience booking LGBT performers. “Gay comedians are the least booked,” he said. “Comedy clubs just don’t take chances on gay comedians. They just don’t think we have a market.” This can be a challenge, he said, even in the liberal Bay Area. So in 2011, Ballard decided to create the Hella Gay Comedy Show, a monthly event featuring LGBT and “LGBT-friendly” standup comedians.

Hella Gay has given Ballard and other gay comedians a space to push the boundaries of mainstream comedy: “My brand of standup comedy is very out there, very abrasive,” he said. “I do go there. I’m not so politically correct. I will use any word in the English language to get my point across.”

This weekend, Ballard is bringing his in-your-face attitude to a different kind of audience — the 31st annual Gathering of Nations Powwow in Albuquerque, New Mexico. The powwow is said to be the largest gathering of Native-American and indigenous people in the world, bringing together tens of thousands of attendees for music and dance performances across multiple stages. Ballard will host Stage 49, which showcases traditional and contemporary artists.

Ballard, who was born in San Francisco and grew up in Oakland, is a member of the Sac and Fox Nation. The 39-year-old performer is, as far as he knows, the only openly gay Native-American professional comedian. Since 1994, he has regularly attended the Gathering of Nations Powwow, and performed as a host in 2011. This time, however, he’s bringing more of his Hella Gay side to the stage; he plans to host the entire show in drag (although he said his act will be “family-friendly”).

While Ballard has experienced his fair share of discrimination and homophobia in the comedy industry, he said he expects the Native-American crowd to fully embrace him. “I’m going to fit in like the missing piece of the puzzle,” he said. “It’s just so eclectic — there are so many different artists and so many different genres. … I just plan on being as fun as I can and it’s going come out however it does. The audiences are supportive.”

Since attending Sherman Indian High School, a boarding school for Native Americans in Riverside, California, Ballard said he has always felt welcome in Native-American communities, whose values, he said, emphasize caring and compassion. “I saw there were kids just like me out and open. … I can be a queer native and be accepted.” While the terminology used to describe different sexualities and gender identities varies among tribes, Ballard said he identifies with the common term “two-spirit” for LGBT Native Americans. To him, being two-spirit means “being a whole person — somebody who is at peace with themselves.”

Hosting the Gathering of Nations Powwow, he said, is a significant opportunity to support an event in which Native-American artists can showcase the diversity of their work to a wide audience — and break down stereotypes in the process. “People think we are supposed to be boxed into a certain genre.”

The last time Ballard hosted Stage 49, organizers praised him for “being over-the-top,” he recalled, which he thought was funny given that his performance was, at least relative to his Bay Area gigs, fairly mild. “This time I’m really going to give them over-the-top.” Ballard said he has refined his drag queen persona (which he sometimes refers to as “Nasty Ass Bitch”) in recent years to be very different than the typical coiffed drag queen. “I’m not very well put-together,” he said. “I’m the complete opposite.”

Still, he said any crowd can appreciate his character. “I’m just somebody who is outrageous — somebody who will cut loose and just have fun,” he said, noting that dressing in drag for him is not about looking fancy, as it often is for some drag performers in San Francisco. “For me, that’s the whole point of being in drag — to just be out there bringing joy and happiness to everyone.”

Organizers of the Gathering of Nations Powwow said it was important to feature a diverse group of performers, including those who identify as LGBT, said Melissa Sanchez, owner of Emergence Productions, which is the entertainment coordinator for the event. “He really engages the audience well and he puts himself out there as a performer. He’s not scared to be crazy and silly,” she said. “And he brings a fresh perspective.”

Ballard said he’s not shy about telling potentially offensive jokes. The last time he hosted the powwow, he poked fun at Navajos and Hopis, which earned him some laughs (from the Navajos when it was about the Hopis, and vice-versa, he said). His main goal is to make sure the crowd is engaged: “If I lose their attention for one moment, I’m not doing my job.”

In his standup routine, he often jokes about his identity, sometimes with anecdotes about dating and sex, or with one-liners such as “It’s hard being American Indian and gay. Every time I dance to house music, it rains — men.”

Ultimately, Ballard hopes to see more gay comedians receive the same kind of exposure that their straight standup counterparts do — and he’s willing to jump on any opportunity to introduce audiences to LGBT performers, whether it be at the Gathering of Nations or in independent movies (he recently scored his first acting gig in the film All The Others Were Practice). And while his Native-American background has given him opportunities to perform for large crowds, he only accepts gigs that allow him to embrace his LGBT identity.

“There are a lot of haters out there, especially in the standup comedy world,” said Ballard, noting that he would get booked a whole lot more if he promoted himself simply as a Native-American comedian. In fact, he said he has turned down gigs from people who want a Native-American act but ask him to “not do any of the gay stuff.”

Because of this unfortunate reality, Ballard works hard to bring together straight and gay comedians and crowds, most recently with Sausage Fest Comedy Show, which was held in San Francisco last month. The comedy show featured straight male comics doing sets in a gay bar — with their shirts off. Ballard said he was driven to make the event even more successful after encountering straight performers who said they didn’t want to be associated with a gay show. “To be honest, I wanted to get these motherfuckers back. … How can I make my gay show so successful that I can rub it in their face? Maybe you should’ve given me a chance!”

For some straight local comedians, the opportunity to perform in front of a gay audience is a welcome one. “What makes his shows unique is that he challenges comics to step outside of their comfort zone,” said Tommy Arnold, a San Francisco comedian who performed at Sausage Fest. Ballard helps break down the comedy “hierarchy,” which typically places straight males at the top, Arnold said. Part of that, he added, means recognizing that crowds want diverse performers, as long as they are talented: “Funny is funny.”