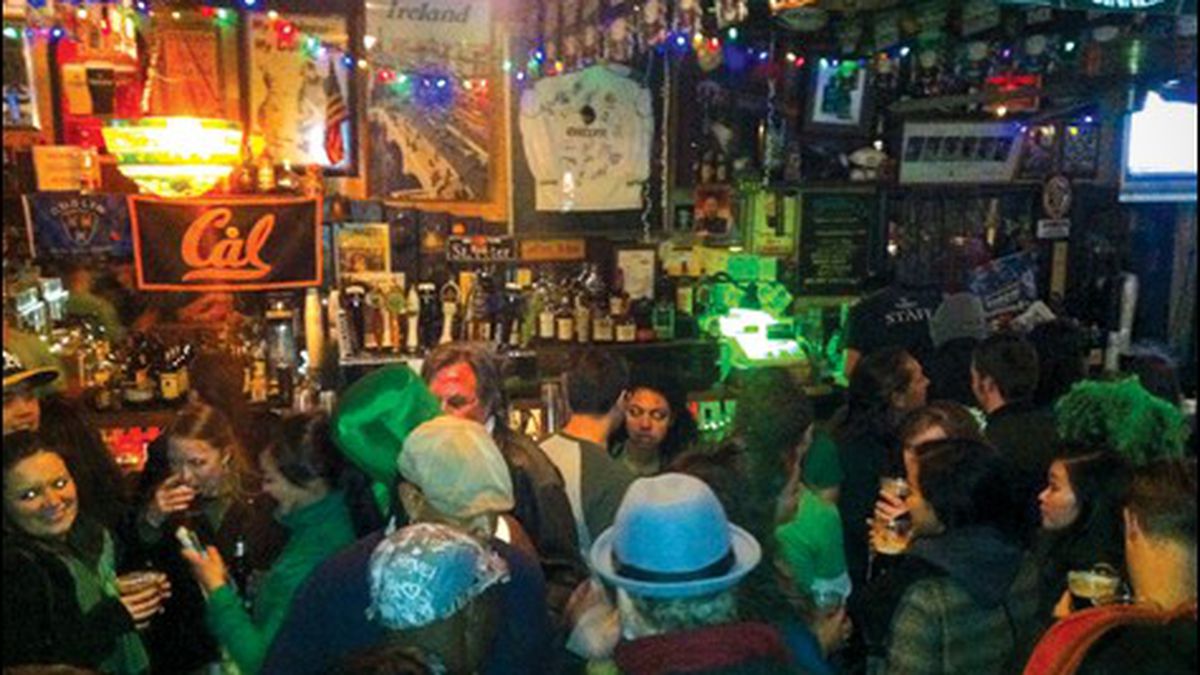 Bagpipes and booze at the East Bay's best Irish bar.

Sometime around the year 400, Saint Patrick, a former Pagan, found god, escaped slavery, became a bishop, converted Ireland to Christianity using the shamrock as an instructive stand-in for the holy trinity, and, awesomely/apocryphally, rid the entire island of snakes, just by sheer force of will. At some point thereafter, Americans decided to honor his legacy with food-colored beer, raucous celebration, and unchecked drunk accentage. And so it goes.

McNally’s is, as far as I can tell, the East Bay’s only dedicated Irish pub, and St. Patrick’s Day is its biggest of the year. By 6 p.m., the bar was already about three-quarters full; by 8:30, a line stretched out the door and spilled into the street, the soft-looking and quietly moneyed patrons of next-door Hudson left to gawk through plate glass at the growing crowd discreetly passing bottles and teetering on lime-colored high heels. An auxiliary cash bar was set up with folding tables in the back room; an extra Port-a-Potty occupied an alley near the entrance, in the (inevitable) event of bathroom bottlenecks; the pool table that usually takes up the middle of the main room was gone; and a makeshift DJ booth was shoehorned into a corner. Just after nine, an entire, kilted corps of bagpipers and drummers, about twenty or so of them, stormed the entrance and played a set of traditional Irish songs to deafening applause and flashing cell-phone cameras; afterwards, they were all but swarmed with people begging to buy them drinks. The space teemed with green, stank of booze, and rippled with people: face-painted frat types, improbably drunk-looking old people, an actually Irish gentleman wearing head-to-toe corduroy, glass-eyed girls in Guinness-emblazoned Mardi Gras beads. It was goddamn fantastic.

Full disclosure: In my civilian life, I go to McNally’s nearly every week, as it’s the sponsor bar for my kickball league. (Full disclosure #2: I’m in an adult kickball league; YIKES!) Most of the time, of course, it’s a decidedly lower-key place, but even when it’s not St. Patrick’s Day, the bar has a comfortable, convivial feel. The front room is cozy and warm, with stone floors, Tiffany-style lamps, hanging Christmas lights, framed jerseys on the walls, and various Cal errata all over the place. The back, meanwhile, looks like a frat basement, in the best way possible — cement floors, big-screen TV that seems always to be playing sports, crooked corner bookcase, big pipe running along the ceiling, green-painted walls lined with a seemingly random assortment of posters (Scarface, a faux-vintage Guinness ad, Marilyn Manson, “I Hella Heart Oakland Teachers,” somewhat out of place). The Irish theme is certainly present, but not suffocating, the bar staff are capable and friendly, and the drinks are adequately strong and appropriately cheap. It’s a great place, and I’m not just saying that because they let us play flip cup.

But anyway: St. Patrick’s Day. By ten, the space was packed and warm, people spilling out into the nearby alleyway to have a smoke and cool down. There was, mercifully, no green beer in sight, though Irish car bombs and thick-headed Guinnesses were consumed with startling speed and remarkable abandon. A blond woman poured a Jameson bottle into the mouth of a young man in a foam four-leaf clover headdress. Irish corduroy dude wisely peaced out, but not before two whiskeys and a beer. A pair of gray-haired women in vinyl jackets gyrated along to Ke$ha. Approximately one million people asked each other if they were Irish. A group of broey-looking guys huddled in a corner, eating their corned beef sandwiches and shouting over the music. The bagpipers appeared to be enjoying their beers mightily.