Plans to renovate a triangular park on San Pablo Avenue are raising concerns from residents about displacing current park users and questions about how to provide sustained investment in a neighborhood that has long been neglected. 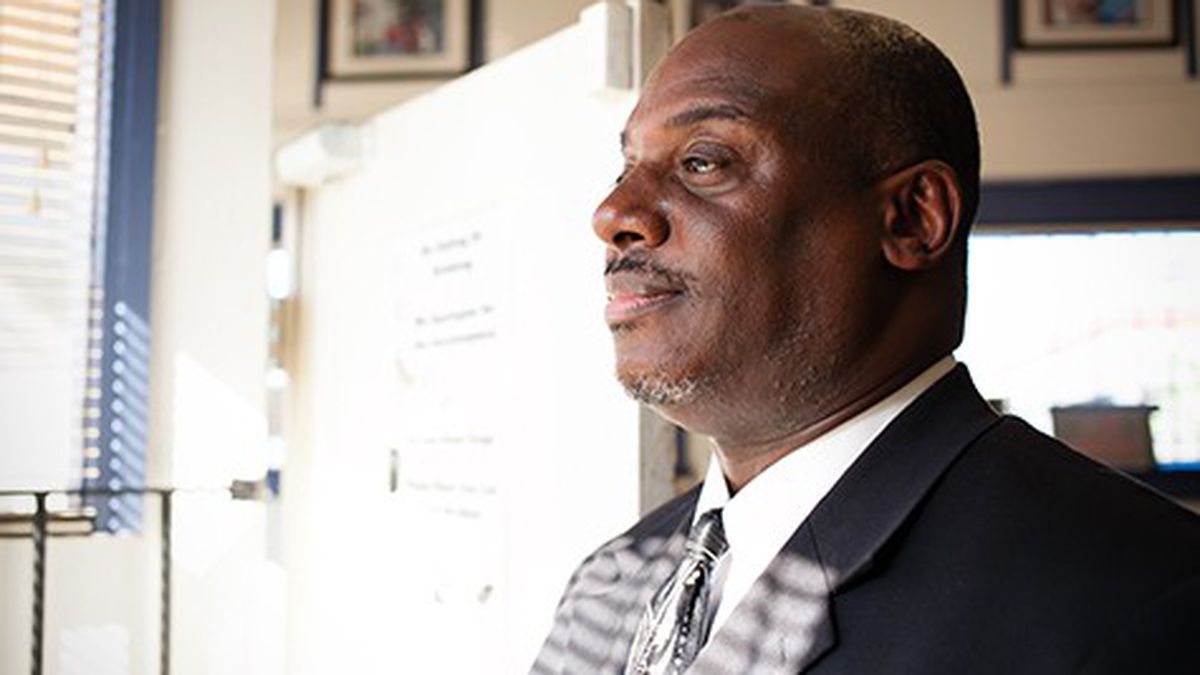 Locals call it Triangle Park. At less than a quarter-acre, bounded by San Pablo Avenue and 32nd and Filbert streets, the concrete plaza is officially called St. Andrews Plaza and includes dusty planter beds and a smattering of trees lining its edges. For years, area homeowners have complained about the park, saying it attracts drug dealers, sex workers, and violence.

The City of Oakland received a $456,000 grant in July to renovate the space, and crews erected a fence thin this week so that workers can begin the demolition before the remodel, which is expected to start at the end of the year. Though relatively obscure to people outside the neighborhood, the renovations proposed for the tiny park are stirring up mixed feelings among residents, many of whom laud the changes but are concerned about what will happen to the current park users.

Tiny Gray-Garcia, an Oakland resident and co-founder of POOR magazine was eleven when she and her mom lost their housing. While they were living out of their car, her mom would often park near the plaza, and they would sit in the park during the day, she said in a recent interview. For her, Triangle Park was a refuge. She recalled elders in the park asking how she was doing and watching after her. When she became homeless as an adult, she went back to the plaza. It was the one place where she felt comfortable talking to others about the crisis of gentrification, she said.

Gray-Garcia, along with other social justice activists, was planning a protest at the park on Tuesday. She’s worried about what will happen when the fences go up. “The crucial line is public space for the public,” she said.

The San Pablo Avenue corridor is poised for change. The West Oakland Specific Plan, a roadmap for future development in the area, identified commercial buildings on San Pablo adjacent to the plaza as “opportunity sites” for mixed-use construction. And the nonprofit East Bay Asian Local Development Corporation (EBALDC) has spearheaded a partnership with multiple community-based organizations and city and county agencies called the San Pablo Avenue Revitalization Collaborative, which aims to address health disparities among West Oakland residents, increase opportunities for affordable housing, promote economic development, and combat blight, said Romi Hall, EBALDC’s healthy neighborhoods manager. City officials say they’re not trying to displace anyone or bar any of the current users from enjoying the plaza. Rather, they’d like to see changes in the types of activities happening there.

“Everyone is absolutely welcome to use the park now and in the future,” said Joe DeVries, an assistant to the Oakland city administrator.

DeVries began working in the Hoover neighborhood, which abuts but does not technically include the plaza, more than a decade ago as part of the City-County Neighborhood Initiative, a collaboration of city and county agencies, community-based organizations, neighborhood groups, and UC Berkeley. DeVries said he went on walks with seniors in the area, and the plaza was high on their list of concerns then and still is now. From November 2014 to November 2015, public works employees responded 140 times to reports of illegal dumping at the plaza, and Oakland police responded 239 times to calls for service within 1,500 feet of the plaza, DeVries said. Residents in the area say it’s been that way for decades.

The turning point, said multigenerational resident Madeline Wells, was “the total destruction of the neighborhood” when Interstate Highway 580 was built in the 1960s. Whole blocks were razed, including the St. Andrews Roman Catholic Church, which was moved from the corner of 36th and Adeline streets to Brockhurst Street and San Pablo Avenue, across the street from where the plaza is now.

The entire San Pablo Avenue corridor “deteriorated into a dumping ground,” Wells said. It became what Alternier Cook, another multigenerational resident, called “apathy valley.” Like many longtime Black residents, Cook and Wells said they are tired of seeing trash, hypodermic needles, and human excrement littering the sidewalks that border the plaza. But the legacy of eminent domain has left many in the community wary of city policies aimed at improving the area in the name of progress, Cook said. Although she said she would like the plaza to be a place where parents feel comfortable taking their children, Cook said she also doesn’t want to see people who use the park “rounded up like cattle.”

Many of the people who use the park live in the area and have been going there for decades, said Pastor Raymond Lankford, president and CEO of Healthy Communities, Inc., a health clinic founded in 2004 at the corner of 25th Street and San Pablo Avenue. His organization has been providing outreach to people along San Pablo since its inception, he said, but over the last few years they’ve made a more concentrated effort to address the needs of people who frequent St. Andrews Plaza. Healthy Communities also partnered with the City of Oakland to embed an outreach worker at the park every day for four months to complete a needs assessment. Lankford said he saw the park users stopping people from fighting at the park and cleaning it daily — as was the case when I visited on a recent Thursday afternoon. On the other hand, Lankford said he saw some young men selling drugs in the plaza as well. But Lankford said that after speaking with them, they expressed a willingness to find new occupations, provided they had an opportunity. “When you have young men of color who have been incarcerated multiple times, especially since their youth, it’s hard to get a job,” Lankford said. “So what do they do? They hang out. You get pulled into things that create problems for you.”

He proposed purchasing a building adjacent to the plaza that could serve as a drop-in center for the park users, a place where they could take showers and receive medical and dental care, substance abuse counseling, and job training. City officials are interested in creating such a center, but no spaces have been identified and no funding is currently allocated, said Brigitte Cook, a community liaison for council President Lynette Gibson McElhaney. Cook noted that along San Pablo, there are already at least four sites where someone can get a meal and at least five drop-in centers, including St. Mary’s Center, which sits directly across the street from the plaza (though it only serves seniors aged 55 or older). Cook said there’s a need to coordinate the efforts of these various agencies and concentrate outreach for park users.

No matter how people feel about the proposed plans to renovate the park, nearly everyone I spoke to said the renovations would change nothing unless there is a concerted effort from the city, community-based organizations, and residents to address the long-term needs of not just the park users, but of the entire neighborhood.

On Thursday, March 10, from 6–8 p.m., at West Oakland Youth Center, 3233 Market Street, the public will have the opportunity to weigh in on three potential designs for St. Andrews Plaza.

“A larger investment needs to be made to look at the surrounding area and make some serious investment in this community,” said Carol Johnson, executive director of St. Mary’s Center. “It has to be larger than the triangle.”