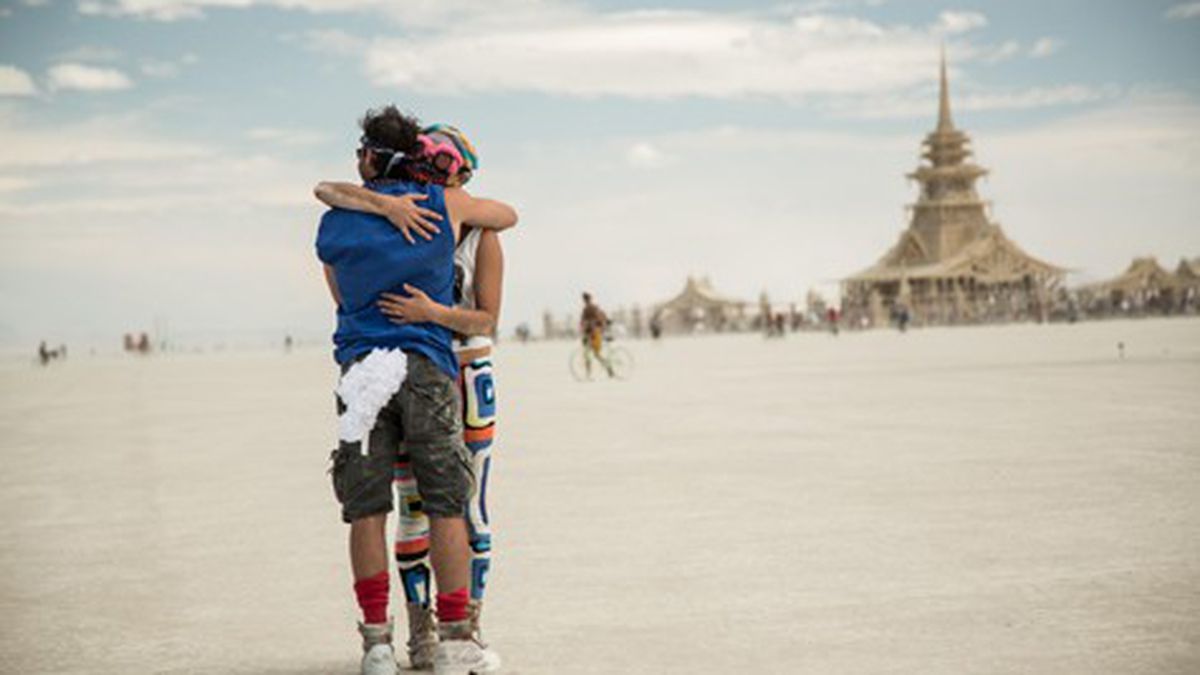 What’s the difference between Burning Man and the Super Bowl? That isn’t exactly the opening to a joke, just one of the questions prompted by Steve Brown and Jessie Deeter’s documentary Spark: A Burning Man Story.

But it’s a question worth pondering. The annual gathering of the techno-hippie tribes in Nevada’s Black Rock Desert has more in common with the annual pro football orgy of commercialism than we might think. Both events involve serious crowds (Burning Man just finished hosting some 60,000 people) in sunny locations; months of planning; various ancillary sub-events; and scarce, highly prized tickets. And both revolve around rituals that once upon a time held great meaning for the participants, but now have reached the stage where the original energy and motivation have been overshadowed by the carefully packaged spectacle. And for many that spectacle has grown stale.

The burnout factor is always there, lurking unspoken in the background of this doc, which otherwise makes an enthusiastic case for Burning Man, from its “Let’s burn a wooden figure” beginnings on San Francisco’s Baker Beach in 1988 to its present status as a curious combination of visionary creativity and frat-party hedonism. Deeter, a veteran writer-producer on PBS’ Frontline/World who also made the two Electric Car docs, brings a practiced eye to the inner workings of the Burning Man organization. A host of founding Burners testify on its history and goals, including big kahuna Larry Harvey, who appears dazed by the brilliance of his brainchild. The real fabric of Burning Man, however, seems to belong to people like welder Katy Boynton; Otto Von Danger, an ex-Marine artist with an authoritarian streak; and Quinn Payton Yarbrough from Gerlach, Nevada, manager of the all-important infrastructure.

Naturally, the biggest selling point is the carnival on the Playa: Big art, fantastic structures of wood and iron, lasers, hella fire, the illusion of spontaneity, ubiquitous-but-discreet sex, nonstop music (most of it canned), dancers of every description, naked bodies topped by goggles, nutty vehicles galore, and acres of smiling faces, waiting for something to blow up. A disposable metropolis. Everyone, with the possible exception of those two young squires looking for the VIP Lounge, claims to be guided by the 10 Principles: De-Commodification, Radical Self-Reliance, Communal Effort, etc.

The most important of these is Gifting. Nothing is supposed to be bought or sold on the premises. And yet the event’s popularity has led to a very competitive ticket lottery and the inevitable requests by major corporations (you can guess which ones) for drop-in “Plug ‘n’ Play” accommodations and luxurious high-roller campsites, as opposed to the DIY ethos. In other words, certain attendees want to bring sacks of money instead of giant snails and Trojan Horses. Old-timers are being left behind; some of the artisans who build the trippy wats and fun-houses are getting shut out of the ticket process.

Cinematographer John Behrens’ camera drinks all this in, and the filmmakers’ total access gives us enough background to let us see the big picture. Burning Man may be a victim of its own success, but the pull of its frontier-stoner guiding light — a very Bay Area vibe — is hard for thousands of people to resist. The good news: Burning Man is going nonprofit (what? Wasn’t it always?), and fifty regional affiliated events have sprung up in places like Kentucky, New Zealand, South Africa, Lithuania, Spain, South Korea, and British Columbia, alongside the now-legendary Pre- and De-Compression parties from one end of California to the other. So it’s actually bigger than the Super Bowl after all. We can relax now.

An MC with Tai Chi