Hutch highlights the diversity, and the generous spirit, of down-home Southern cooking. 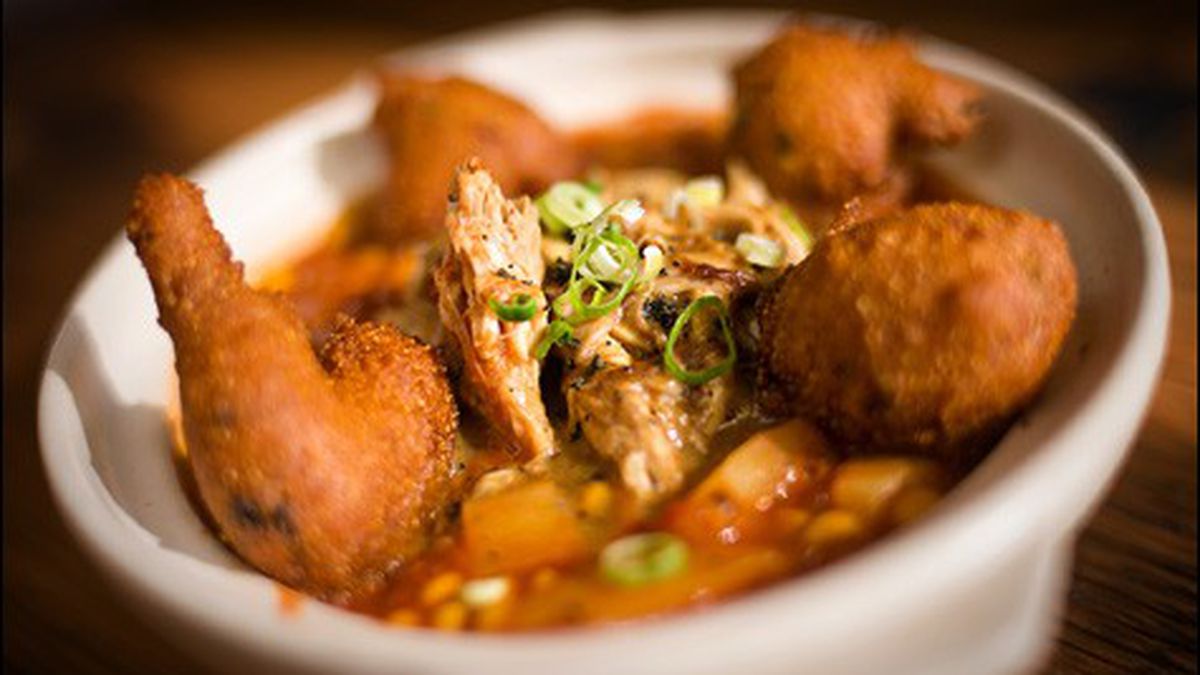 As a lifelong Northerner who loves Southern cooking above all other American cuisines, one of the things I’ve always appreciated about Southern food — beyond the airy-light biscuits, the liberal use of pork fat, and the pleasures of “slow-and-low” cooking — is its spirit of generosity.

Of course, when you’re presented with huge quantities of mediocre food, that generosity is a mixed blessing at best. But when, on the other hand, you sit down for one of the prix-fixe, family-style Sunday Suppers at Uptown Oakland’s Hutch Bar & Kitchen, during which dinner is served on oversized platters that are so gargantuan, and weighed down with so much roasted pork, baked beans, coleslaw, and mac ‘n’ cheese, that you start to speculate about how buff your server’s forearms are going to be by the end of the year — well, when presented with such a feast, the only proper thing to do is rejoice. Especially since the food at Hutch is, on the whole, really quite good.

Chef-owner David King, a Memphis native who was the opening chef at San Francisco’s Southpaw BBQ, opened the restaurant in June in a high-ceilinged space that has been renovated beautifully: Think huge, majestic-looking chandeliers and lots of reclaimed wood — but without the kinds of hipsterish design touches that make so many Uptown bars feel overly twee. It’s a nice place, but one where you can bring your grandma without worrying that she won’t fit in.

What I like about Hutch, in addition to the generous portions, is the way the restaurant strives to expand the lexicon of Southern food in the Bay Area. It would have been easy for King to open with a menu of greatest hits familiar to even the most inexperienced Yankee: fried chicken, barbecue, and maybe a gumbo or jambalaya. Instead, he’s taken it upon himself to introduce dishes that much of Oakland’s dining public won’t likely have heard of.

So, instead of serving a gumbo, Hutch offers a version of rabbit Brunswick stew, a traditional dish of Georgia and Virginia. It’s a tomato-based stew — very tomato-y, and chock full of carrots, potatoes, and corn, almost like a slightly spicy minestrone. What was most notable, though, was the rabbit, an animal that’s difficult to cook properly given how small and bony and prone to toughness it is. King’s rabbit, which he braises separately before pulling the meat off the bones, shredding it finely, and adding it to the stew — was as tender as any slow-poached chicken.

Hutch also shines a spotlight on grits — that mostly underrated side-dish starch. During a phone interview prior to the restaurant opening, King told me he hoped he could do for grits what restaurants like Homeroom have done for mac ‘n’ cheese — to expose diners to preparations they might never otherwise encounter. Of course, shrimp and grits will always be the crowd favorite, and King serves an awfully tasty version, with Louisiana white shrimp, Andouille sausage, and a spicy Creole sauce. He also does a version that couples the grits with braised veal shank and yet another that pairs them, Memphis-style, with perfectly fried catfish and sweet-and-tangy tomato gravy. For an appetizer, he rolls the grits up into little balls and fries them, arancini-like, which was my favorite preparation of all.

Grits connoisseurs generally fall in one of two categories: those who embrace cheese and those who don’t. I’ve always been a no-cheese grits guy myself, but King adds what he says is an “insane amount” of two types of cheddar (Tillamook and Fiscalini) to each batch. As a result, the sharp-cheddar flavor can be overwhelming, and when the grits were paired with the fried fish, I found myself wishing for a lighter preparation. (With the shrimp, the Creole sauce was tangy enough to cut into the richness.) Personal preferences aside, the grits were expertly prepared — creamy, but with enough of a bite to prevent them from tasting like mush.

Other things you won’t find at every run-of-the-mill soul food restaurant: bourbon-cured salmon (excellent, especially as part of a bagel sandwich during Sunday brunch) and a bar menu that features more than sixty American whiskeys — including five kinds of moonshine. King is even trying to spread the gospel of pimento cheese, a dip often described as the “caviar of the South.” Unlike many recipes I’ve seen, Hutch’s version wasn’t cut with much, if any, mayonnaise, and I found the resulting spread a bit too dry and clumpy to enjoy. Transplanted Southerners who grew up with the stuff: Your mileage may vary.

Hutch also specializes in raw oysters on the half-shell, a tray of six served with a trio of house-made condiments (cocktail sauce, bourbon barbecue sauce, and a chile-cider mignonette), which add a sense of occasion to your slurping. Hutch gets the little things right: The oysters were impeccably shucked (nary a speck of grit or broken shell) and served very, very cold — bracing enough to slap the sleep out of me on a groggy-eyed Sunday morning.

Each day there’s usually just one variety. I loved the briny sweetness of the Cove Miyagis, which were petite — easily dispatched in a single bite. When oysters are as fresh as these, condiments are almost beside the point. Still, I kept going back to King’s complex, smoky barbecue sauce — an addictive pairing the chef concocted as a play on grilled oyster with barbecue sauce.

But if you plan on trying Hutch just one time, let it be for Sunday Supper. Each family-style meal is priced around $20 a person. One week the main course might be a fried chicken recipe passed down by King’s maternal grandmother; the next, it’s a spaghetti recipe from his father’s mother. The week we went, our platter was heaped with dry-rubbed pork shoulder, slowly roasted and cut into thick slices; a crunchy chile-vinegar slaw; sweet, oozy baked beans; and, best of all, baked mac ‘n’ cheese that was topped with thick shards of crunchy, cracker-like cheddar. For dessert, we had thick wedges of custardy banana bread pudding.

Oh, it was a feast all right — a vision of abundance that had this Yankee dreaming of the South.