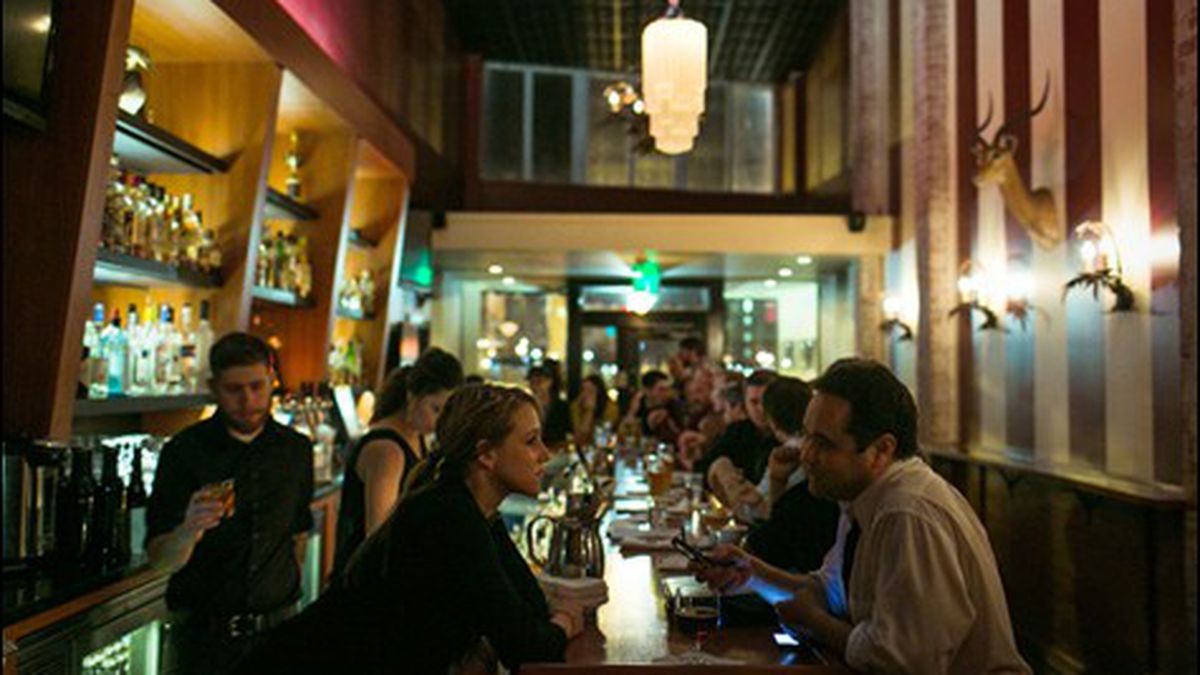 There's more to the East Bay's drinking culture than meets the eye.

As hard to believe as this may be, there was a time when the East Bay was the kind of unsettled backwater where “craft cocktail” didn’t mean anything to anyone, and truly high-quality drinking had to be done across a bridge or through a tunnel — nary a rosewater tincture or monk-brewed beer in sight. Those days, of course, are long over, and at this point — as new bars nestle in with older standbys, and perpetually crowded hotspots are still met in equal measure with hidden gems and holes in the wall — it’s fair to say that the East Bay boasts one of the most exciting — and evolving — nightlife scenes in the Bay Area. Prep your liver.

Uptown — the neighborhood roughly bordered by 17th Street to the south, 27th Street to the north, San Pablo Avenue to the west, and Webster Street to the east — has gotten the most attention with regards to this so-called nightlife renaissance, and it’s entirely well-deserved: In terms of volume and variety, this dense, walkable neighborhood — which is conveniently anchored by the 19th Street BART station as well as several AC Transit lines— is by far the best place to bar-hop in the East Bay. Start with the newest addition, Fauna (1900 Telegraph Ave., Oakland, 510-286-0100), a dimly lit, well-appointed little slip of a cocktail bar that has quickly and quietly become one of the best places around for a low-key date or happy hour. Sit at the sturdy wood bar, marvel at the taxidermy, order the Dial D for Derby (Four Roses bourbon, grapefruit, and coffee-honey syrup) and the burrata (on toast with gray salt olive oil) and feel all your troubles disappear. After that, head to Hopscotch (1915 San Pablo Ave. Oakland, 510-788-6217, HopscotchOakland.com), a small, upscale restaurant that opened a few months ago and has garnered heaps of foodie buzz for its Californian-Japanese cuisine — but which also happens to have a full liquor license, a kind and capable bar staff, and one of the best Old-Fashioneds in the known universe.

Also worth checking out are Telegraph (2318 Telegraph Ave., Oakland, 510-444-8353, TelegraphOakland.com), a new-ish sausage restaurant and beer garden that’s absolutely unbeatable on a warm, clear day, and, a bit farther north on a quiet stretch in Koreatown, CommonWealth Cafe and Pub (2882 Telegraph Ave., Oakland, 510-663-3001, CMonOakland.com), an endlessly cozy and extremely, authentically British pub that offers a great selection of beer, both British and local — and which, having been pummeled pretty hard by an electrical fire back in July, deserves all the local love it can get.

But even amidst this resurgence in interest in craft booze and its attendant cocktail palaces, there are also a bevy of older, more off-the-beaten-path places in Uptown — places that might not get much play from the national press and could conceivably be completely empty on a Friday night, but which offer character, conversation, and excellent (often cheap) booze. Places like 19th Street Station (339 19th St., Oakland, 510-893-1919), where Roy Mejia has been serving up cheap beer and Bay Area lore to an inordinately close-knit group of regulars for 31 years without a single day off, and Kim’s Backyard (2424 Telegraph Ave., Oakland, 510-834-8264), which draws an eclectic, age-diverse, and always-entertaining mix of folks, all ruled with dictatorial benevolence by the eponymous Kim, a tiny, surly septuagenarian who’s become something of a folk hero for her no-nonsense attitude and obsessive devotion to the Oakland Raiders. And though they certainly have at least one foot firmly planted in the nouveau-nightlife scene, both Two Mile Wines (477 25th St., Oakland, 510-868-8713, TwoMileWines.com), an urban winery, and Penelope (555 12th St., Ste. 120, Oakland, 510-834-0404, PenelopeOakland.com), which offers fresh-fruit cocktails and an excellent street-side patio, also manage to hide in plain sight by virtue of their locations (the first, a nondescript-looking warehouse that transforms into a low-lit, inordinately pleasant tasting room a few evenings a month; the second, a shoebox of a space on the ground floor of an office building on an otherwise industrial block), rendering them two of the area’s best-kept secrets.

Speaking of well-kept secrets: Old Oakland, long a picturesque-but-staid little enclave better known for its pretty Victorians and old-school businesses than its nightlife, is now experiencing something of its own dining and drinking renaissance, with the newly renovated Swan’s Market serving as anchor and spiritual center. That’s where Rosamunde Sausage Grill (911 Washington St., Oakland, 510-338-3108, RosamundeSausageGrill.com) now slings — you guessed it — gourmet sausages, along with some 25 varieties of craft beer and one of the best dill pickles around in a casual, communal setting perfect for warm evenings and big groups. It’s also where Brendan Eliason, the hilarious and endlessly knowledgeable one-man team behind Periscope Cellars, sets up shop at his tasting room (538 9th St., Oakland, PeriscopeCellars.com) — really not much more than a rough-hewn stand in the middle of the cavernous room that also houses Cosecha — every Thursday, Friday, and Saturday night from 6 p.m. to 9 p.m., offering delicious, affordable wines by the glass and bottle. Moving closer to Jack London Square, Beer Revolution (464 3rd St., Oakland, 510-452-2337, Beer-Revolution.com) is the grand-daddy of the East Bay craft beer scene (and is commensurately packed), but its newly opened sister shop, The Old Depot Public House (468 3rd St., Oakland), offers many of the same beers (plus vegan-European food, if you’re into that), with half the crowds — though maybe not for long. And in North Oakland, the lodgelike, low-key, criminally underappreciated Ye Olde Hut (5515 College Ave., Oakland, 510-653-2565) remains the East Bay’s best (and possibly only) ping-pong bar, while Barclay’s (5490 College Ave., Oakland, 510-654-1650, BarclaysPub.com) boasts a long, well-chosen list of varied and surprisingly obscure beers in the somewhat unlikely setting of a kid-friendly brewpub.

None of which is to suggest that Oakland has a lock on nightlife — far from it. Downtown Berkeley has long been known for Jupiter (2181 Shattuck Ave., Berkeley, 510-843-8277, JupiterBeer.com) and Triple Rock (1920 Shattuck Ave., Berkeley, 510-843-2739, TripleRokc.com) — two brewpubs that have been anchoring Shattuck Avenue for decades and are exactly as solid as they were way back when. But if you’re looking for something different, head to Bobby G’s (2072 University Ave., Berkeley, 510-665-8868, BobbyGsPizzeria.com) on a Wednesday night for great pizza, a surprisingly wide beer selection, and a convivial pub quiz, or Nick’s Lounge (3218 Adeline St., Berkeley, 510-652-6425, NicksLounge.com) on a Sunday for an intimate lounge experience and an evening of great, absolutely free, jazz by the Randy Moore Trio.

Even Albany’s getting into the game: For upscale, inventive cocktails (think ginger-pineapple foams, obscure spirits, and fresh-squeezed juices), head to the newly reborn Ivy Room (860 San Pablo Ave., Albany, 510-526-5888, IvyRoom.com); for … not that, Albany Bowl (540 San Pablo Ave., Albany, 510-526-8818, AlbanyBowl.com) has a full, cheap bar, a fascinating clientele, and, of course, easy access to all kinds of diversions.

And in Alameda, which has always had an inordinate number of bars per capita, places like the delightfully kitschy tiki palace Forbidden Island (1304 Lincoln Ave., Alameda, 510-749-0332, ForbiddenIslandAlameda.com) continue to assert the island’s place as a drinking destination, but hidden gems such as the Alameda Vintners Club (2301 Central Ave., Alameda, AlamedaVintners.com), a small wine bar located inside Angela’s, a Mediterranean restaurant, and the Fireside Lounge (1453 Webster St., Alameda, 510-864-1244, TheFiresideLounge.com), a comfortable craft cocktail bar set on the island’s quieter west side, show that there’s more to Alameda’s drinking culture than meets the eye — much like, in fact, the rest of the East Bay.