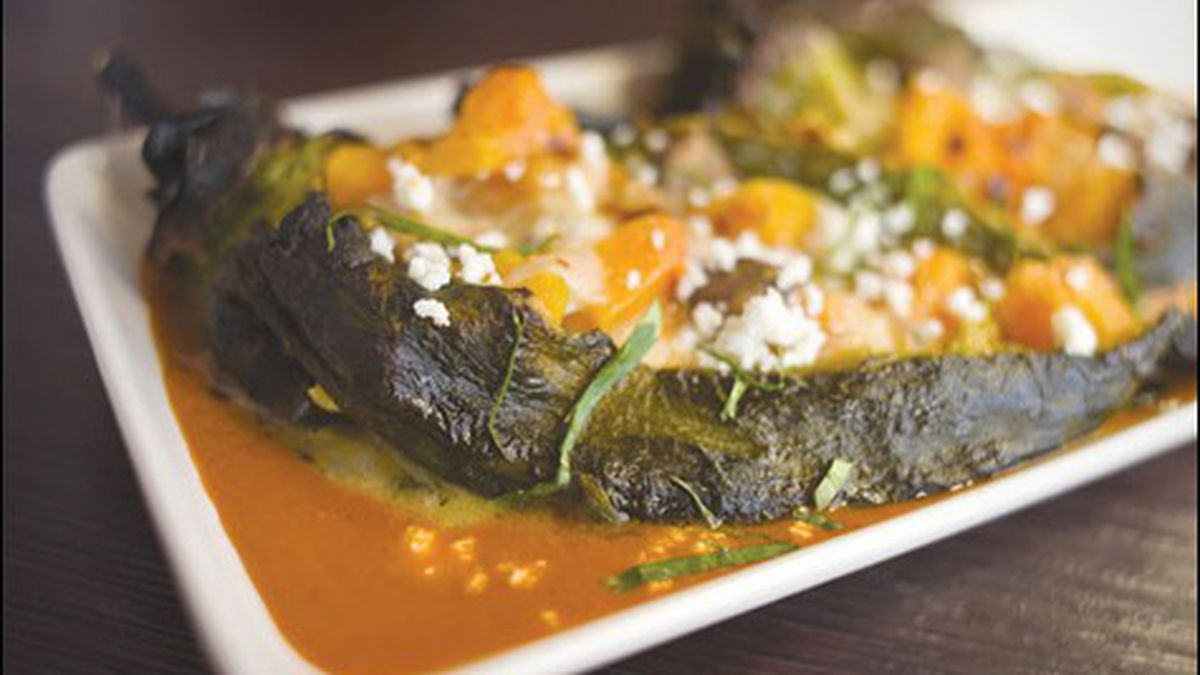 A jaded friend of mine would like “Lower Your Expectations” to be a universal credo. According to her, nothing sets people up for more disappointment than believing they might enjoy something. For instance, if my expectations had just been more reasonable, I might have loved The Shawshank Redemption, or the state of Montana. Or Glenview’s new pan-Latin restaurant, Rumbo al Sur.

Recipe for building hype: Start with a wildly successful fine-dining destination, snagging accolades from Bon Appetit, Esquire, and the New York Times. Lay low for awhile, leaking whispers here and there about future plans. Then when you finally sign a lease, on a sizeable space in a remote neighborhood, just sit tight. Give it a few more years, and the dining public will be worked into a frothy mess of anticipation.

Jack Knowles, owner of critic’s darling À Côté, secured the former Los Compadres space on Park Boulevard in Glenview three years ago. Unforeseen factors (economy, liquor license headaches) kept his new venture shuttered until November. But while reasons for the delay may have been functional, the effect was to make Rumbo al Sur a hotly anticipated opening of epic proportions.

Wander in on a chilly Monday night and it’s like finding the secret hilltop hideaway of the beautiful people. Under flattering, sexed-up red-tinted lighting, well-heeled minglers fill the main room’s tables and press against the long bar. Classical guitar and global beats surge through the space. Behind the bar, fast-talking bartenders work the crowd like affable street hustlers. Beyond the main room wends a catacomb of low-lit dining chambers, decorated with a feudal Spanish bent (casks, curtains, and candelabras).

To start, order a dish of the secret house hot sauce, and don’t allow industrious servers to remove it before meal’s end. It’s a potent blend of carrot, mango, and habanero that proved itself a vital culinary aid. Chef Matt Colgan (longtime head chef at À Côté) said he designed his menu with timid palates in mind; this sauce helps even out the handicap.

The beet salad was a cute starter, with a good balance of sweet and acid: grapefruit and sweet orange interspersed with beet cubes, onions, watercress, and a lightly sweet vinaigrette, Latinized with queso fresco crumbles.

But despite being filled with two meats, two peppers, and three cheeses, the chorizo verde empanadas had little flavor. The ceviche also lacked kick, squandering fresh, Rubenesque whole shrimp in an unadventurous cucumber base. As with many of Rumbo’s dishes, peppers were barely detectable.

Black-eyed pea fritters were a chokingly dry pyramid of golf balls, plunked down in a hazard of bright cashew-ginger sauce. These were quickly abandoned like bad street falafel, though I did enjoy a few spoonfuls of the rich, coconut milk-based sauce.

Soups and sauces are a clear Colgan strength. His simple pozole verde is wonderful, a silky tomatillo-based soup with bits of poached chicken and nixtamalized corn chunks. Served with cabbage and fried tortilla strips, radish, and avocado on the side, this dish exerted maternal instincts.

The traditional braised albóndigas were fine: oversize meatballs stuffed with hard-cooked egg, served amidst tangles of spinach in a tomato chipotle broth. Bits of raw rice in the meat, supposed to be cooked through during the braise, interrupted my chew. Rumbo’s Brazilian-style mussels in a coconut pepper broth were also not quite right. While the ocean meat was tender and plump, the mild broth needed more malagueta teeth.

Luckily this blemish was followed by a beautiful batch of chiles rellenos, effectively scrubbing the tamales from memory. The blistered skin of the roasted poblano was splayed open like a cornucopia horn, spilling over sweet, barely caramelized chunks of roasted squash, sautéed crimini mushrooms, and three cheeses (fromage blanc, queso Oaxaca, and queso Monterey) in various stages of melt. A chile-tomato sauce finished this sophisticated send-up of the Mexican mainstay.

Overall, there was enough to like at Rumbo al Sur. The tamales and pozole soared, and there were only a couple of real bloopers. But when you’ve got a chef like Colgan at the helm, who seems to garner acclaim with the slightest flick of his paring knife, you expect to be floored.

After nearly eleven years making Mediterranean tapas (Colgan calls this “five lifetimes for a chef”) it may be tough to break into a new genre. He credits his Latin cooking knowledge to living in a Mexican food epicenter all his life. But there is a limpness to some of Rumbo’s cusine, suggesting new culinary skills aren’t absorbed through osmosis. It may take a while for Colgan to master the form — and hopefully stop under-spicing to please a wide audience.

But if anyone else is underwhelmed by Rumbo al Sur’s food, you certainly can’t tell from the half-hour wait on an early Monday evening. There’s a lively cool to Rumbo al Sur (possibly too clubby for some) that would feel more at home in Uptown than Glenview’s sleepy de facto Main Street. Colgan himself lives only a few blocks from the restaurant, and you can tell that he wanted to craft a lively destination nightspot for his ‘hood. If only that’s where my expectations ended.

State Education Crisis Worse Than Ever