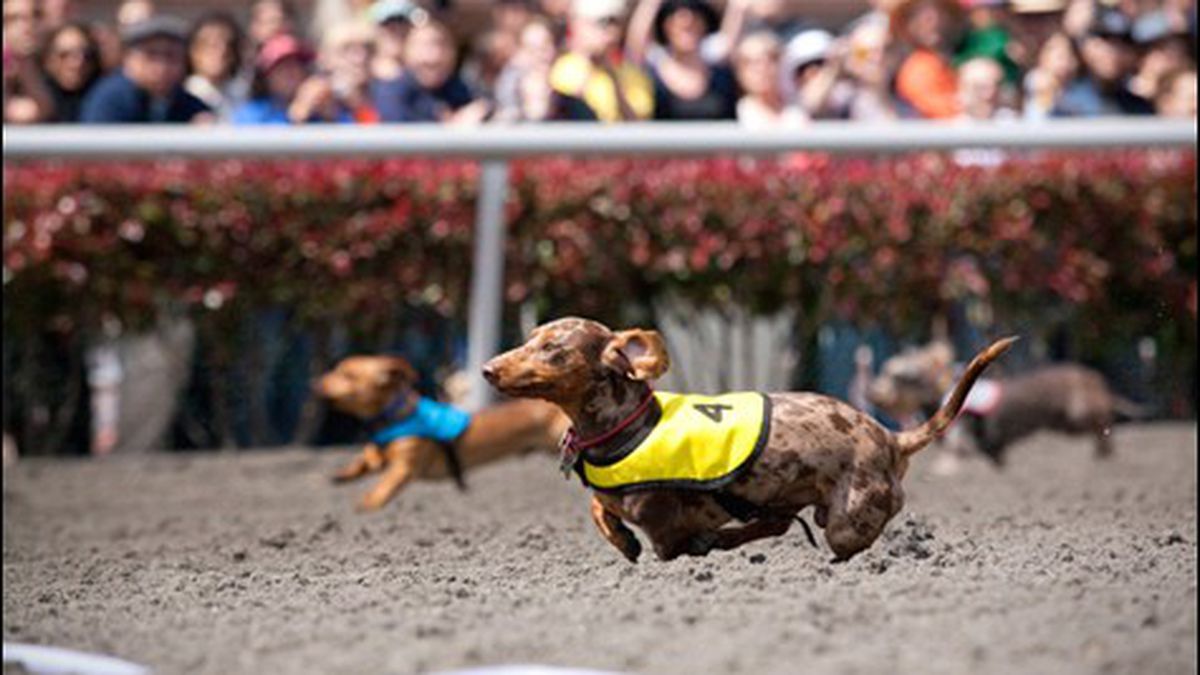 More than one hundred dachshunds will compete in Golden Gate Field's Wiener Nationals.

There’s something mesmerizing about a horse race: the swift motion of hoofs hitting track, propelled by powerful equines under the command of compact jockeys. It’s a common sight at Golden Gate Fields (1100 Eastshore Hwy., Berkeley), which hosts a handful of races each week. But the Wiener Nationals, a special competition on Saturday, August 20, dispenses with the traditional jockey and horse in favor of a much smaller, much longer (proportionally speaking) kind of animal.

The dachshund, more commonly known by its street moniker, “weenie,” is the type of half-goofy, half-regal being that commands at least a second glance and almost certainly a chuckle. It’s probably got something to do with that defiant combination of an impossibly long torso and really tiny legs. And more than one hundred such long-bodied beasts will compete in thirty-yard dashes in between the day’s horse races — perhaps proving that the dogs are more than just the butt-end of some hotdog joke, but more likely reaffirming wiener-y witticisms.

“If you’re sitting up in the clubhouse, it looks like little rodents are running on the track because they’re so tiny and their bodies are so low to the ground,” Golden Gate Fields’ marketing manager Dan Cirimele said of past races. “They’ll run their little hearts out, and others will sit down and roll around in the dirt.” Nine preliminary races on the field’s track will weed out the weenies from the winners, with the top dogs vying for a championship title and cash prizes.

Cirimele said that Golden Gate Fields’ Wiener Nationals, held sporadically and usually during the summer months, has developed something of a cult following since its inception in 2007. Though primarily drawing local canines and owners, dachshunds from as far as Oregon have joined the race. Enthusiastic owners have sent in Christmas cards from their dogs. A Sunday competition in 2009 drew 11,462 spectators — more than twice the normal turnout for that day of the week. “It’s become a gigantic following,” Cirimele said.

In the spirit of fair competition, only purebred dachshunds can enter the race. But beyond that caveat, Cirimele said the race is open to wieners of all shapes and sizes. He once saw a 33-pound pooch waddle across the track, its stomach dragging on the ground like a living mop. Another dog ran the length of the raceway with its hind legs resting in a tiny wheelchair. “No joke,” he said. “She ran thirty yards in a wheelchair and the crowd exploded. She finished last, but you would’ve thought she was the winner.”

And then there’s Sammy Davis, an eight-year-old dachshund who may be the Lance Armstrong of the dog world, winning a 2010 Wiener Nationals and similar races throughout the state. While Cirimele predicted that the perennial winner would prove a fierce contender in this month’s race, it looks like the next championship title will be a toss-up: Patrick Major, who got Sammy to ease his long-term depression while undergoing dialysis for kidney disease, said that after years of racing he’s ready to share the dog’s contagious cheerfulness through non-competitive means. But recalling the exploits of his canine companion, Major was clearly nostalgic for Sammy’s racing days. “He always wins by a landslide,” he said. “It’s solidified everything that Sammy means to me for everyone to get to meet him and see him run.” 11:45 a.m.-5 p.m., $6-$12. 510-559-7331 or GoldenGateFields.com