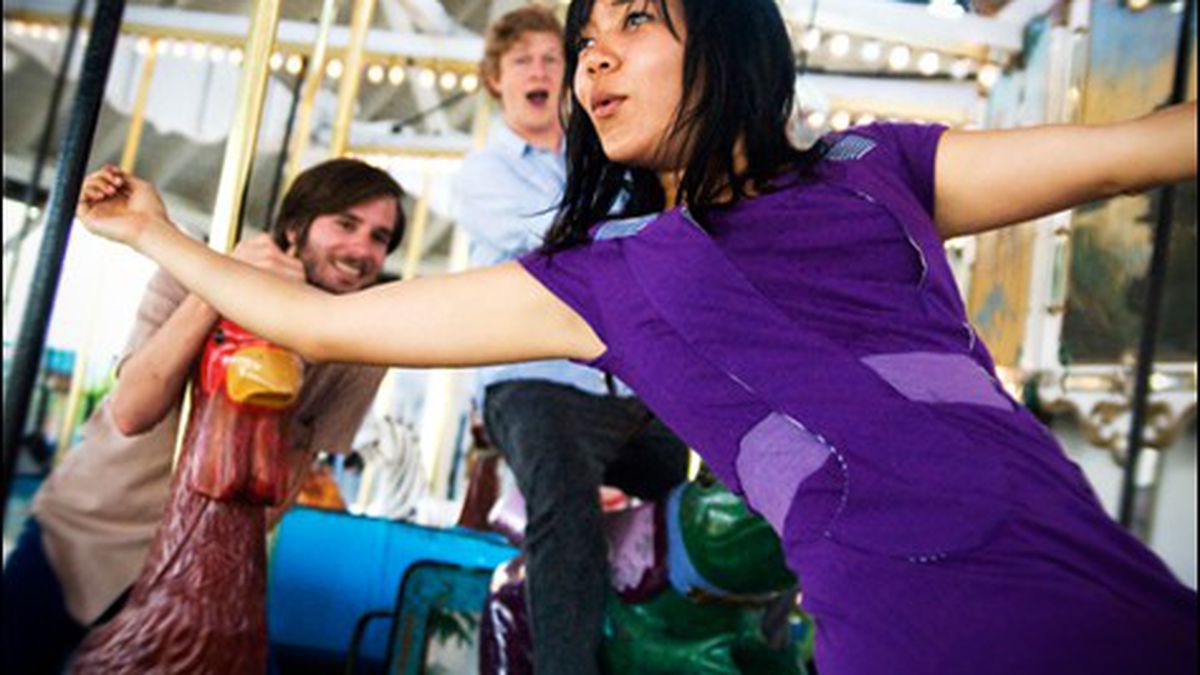 Who's hot this summer? Our picks for local performers to hear.

Oakland guitarist Mike Irwin Johnson has a tough job as leader of the large-scale jazz combo 8 Legged Monster, which appears to have far more than eight legs, at this point. (A recent gig at Club Deluxe included six horns and a three-piece rhythm section, plus special guests.) But he’s quarterbacking for one of the best teams in Bay Area jazz — it’s not often that you find saxophonist Matt Nelson, drummer Jaz Sawyer, and trumpeter Mike Olmos on the same ticket. Onstage, 8 Legged Monster is phenomenal. Johnson pays homage to the big-band era with new arrangements of old standards (including “Saturn” done in the style of Sun-Ra), and original compositions that hark back to the 1940s. A recent fixation with Ray Charles inspired Johnson’s latest project, which he launched with help from California Honeydrops singer Lech Wierzynski. They’ll unveil it at Coda Jazz Supper Club this June. 8LeggedMonster.com (R.S.)

Whether you like metal or not, one thing can’t be argued: a lot of the musicians can play. While some of us were incurring iPhone-related thumb injuries, metal musicians were honing their chops and raising the technicality bar to super-human limits. At the same time, these bands decimated genres parameters, creating all sorts of micro-genres under the “metal” umbrella: technical death metal, black-and-roll, prog metal, pagan folk, etc. Within the technical genre, some bands can get so caught up in showing off their chops that there are no coherent melodies or riffs to latch onto, but that’s not the case for Oakland’s All Shall Perish. Considered “deathcore” — a mix of hardcore, death metal (chugging riffs, growly vocals, double bass), and technical death metal, All Shall Perish creates a stunning sound with its complicated changes, intricate parts, technical precision, and ability to groove all the while. The band has been a well-respected name in the metal community for a while, but is mostly unknown to the masses. That may change soon, as the band’s 2008 album Awaken the Dreamers was named by Metallica guitarist Kirk Hammett as one of his favorite albums of the decade. The band also got top billing on this year’s Summer Slaughter tour, featuring Decapitated, the Faceless, the Red Chord, Veil of Maya, Cephalic Carnage, and others, and rolls through the Bay Area on August 23 at the Fillmore. It should be epic. MySpace.com/allshallperish (K.W.)

San Francisco electronic-music artist Lorin Ashton has been producing music as Bassnectar for years, but right now his specialty, dubstep, is experiencing a mind-numbingly meteoric resurgence in popularity that has made it the reigning electronic sub-genre of the moment. Couple this with the serendipitous timing of Bassnectar’s glitchy, thumping new album, Cozza Frenzy, released late last year, and an EP, Timestretch, added in March, and the grindcore demigod is in prime position for a great summer run. He is already booked up all over the festival circuit this summer, with appearances scheduled at Bonnaroo in Tennessee, Wakarusa in Arkansas, and Wanderlust at Squaw Valley, in addition to a number of smaller festivals around the country. But if you’re Bay Area-bound all summer, not to worry; Bassnectar will be playing a show for the hometown crowd on May 15 at Mezzanine before setting out on the road. Bassnectar.net (T.S.)

Church roots run deep in the music of Virginia-raised singer Crystal Monee Hall, even though she now uses those influences to croon about secular themes. For the most part, Hall is a discrete, scrupulous vocalist whose unhurried phrasing belies the intensity of her music. Don’t let the smooth look fool you — she’s fierce. Let me rub your shoulders while you sip your glass of champagne/Then we’ll act like we don’t notice when the neighbors complain, Hall sings in an old-timey seduction ballad called “Good Love.” “And they will!,” she interjected during a set at Oakland Yoshi’s, causing members of her rhythm section to laugh audibly. A recent transplant to the East Bay, Hall packs her schedule with songwriter showcases and art-house gigs. Her big voice sounds phenomenal in a small room, though tone and personality are her major selling points. Hall makes every love song sound like the blues. CrystalMoneeHall.com (R.S.)

San Francisco’s the Dodos first began generating buzz as a duo — Meric Long on guitar and Logan Kroeber on drums — in 2008. Last year, they were joined by Keaton Snyder on the vibraphone and producer Phil Ek (who has put his stamp on records by the Shins and Fleet Foxes) for their third album, Time to Die, released in September. The Dodos produce a distinct brand of indie-pop jangly enough to be almost instantly accessible, with innovative details that keep you listening. Not to take anything away from their records, but the real joy is seeing the Dodos live, and watching Kroeber let loose on his improvised drum kit. If you missed the Dodos performances on their way up at smaller venues like the Rickshaw Stop and Hotel Utah, you can still catch them, albeit at a distance, when they open for the New Pornographers at the Fox Theater in Oakland on July 18. MySpace.com/thedodos (T.S.)

On the eve of releasing her first album, On a Day Like This …, local singer Meklit Hadero had already generated a huge buzz in the Bay Area. She’s well known in San Francisco’s art scene for co-directing the Red Poppy Art House, which was where she performed for the first time, in 2005. But street cred alone can’t explain Hadero’s break-out success. Rather, it’s the singer’s soft, vibrato voice and careful intonation that make her such a draw. She elides all the hard consonants and draws out all the pretty sounds in her lyrics, to the extent of placing an extra syllable between “c” and “l” in the word “clear.” Not to mention she has a knack for songwriting — Hadero wrote or co-wrote most of the tunes on her new album, and recruited some of the best jazz musicians in San Francisco to play backup. Many people spend years in music school to get chops like that. For Hadero, it seems to come naturally. MeklitHadero.com (R.S.)

Roderick Cudjo has a salty sense of humor. The Hunters Point-raised R&B singer — now better known by his stage name, R.O.D. — enjoys crooning about love, sex, and seduction, but often does it with an edge of scorn or sarcasm. Take his new hit song “I Can’t Stand You,” a breakup ballad that combines murky synthesizer chords with a Too $hort sample. Singing in a voice honed from years of Christian youth choir, R.O.D. rattles off a litany of complaints about his current relationship: I don’t know where we went wrong/I do not remember/But I don’t want to waste no time explaining shit to you. Too $hort appears on the hook, with an expletive that yields as much satisfaction as a slap across the face: Biatch! It’s perhaps the most innovative use of a rap sample in contemporary R&B. With his current radio play and new cult of fandom, R.O.D. performs a lot more frequently in Oakland these days. It’s a great time to check him out. Twitter.com/TheRODProject (R.S.)

Another local band mining psychedelic terrain, Sleepy Sun rocks a bit harder than its contemporaries. There’s a bit of California hippie mixed into the band’s Seventies stoner-rock influences (Zeppelin, Sabbath), resulting in such heavy jams as “White Dove” and the slowly baked “New Age” (off of 2009’s Embrace). Clearly, the band is doing something right. It’s signed to ATP Recordings, collaborated with UNKLE on his new album, and contributed to a forthcoming tribute album to Graham Nash. Sleepy Sun has also earned a reputation for its electric live shows, which you can witness at the record release party for its new album, Fever, on June 10 at the Great American Music Hall. That show launches the band’s nationwide tour this summer, which caps off with a performance at All Tomorrow’s Parties in New York in September. SleepySun.net (K.W.)

When it was announced that Thao (of the Get Down Stay Down) would be playing a show with another female singer-songwriter, multi-instrumentalist and San Francisco-transplant Mirah (proud owner of “the sexiest voice in indie-rock”) for the 2010 Noise Pop Music Festival, the potential awesomeness of the pairing was enough to make a hipster’s head explode. It didn’t disappoint: John Vanderslice (the Bay Area’s indie-rock godfather) tweeted it was one of his top ten shows, and it was roundly reported as one of the festival’s top highlights. The wild success of the duo’s collaboration at the Swedish American Music Hall has now spawned a tour: Thao and Mirah, supported by a band calling themselves “the Most of All,” have scheduled nineteen dates together this summer. Tragically, Bay Area fans will not be treated to a reprise performance. You can, however, catch Thao solo before she hits the road. She’ll be performing in the Great Meadow at Fort Mason on May 15, and at UC Davis on May 22. ThaoMusic.com (T.S.)

John Dwyer is nothing if not prolific. Having played with such bands as Coachwhips, Pink and Brown, and many others, Dwyer has lately consumed himself with Thee Oh Sees, which began as his solo project and has put out a stunning eleven albums, not to mention numerous EPs and seven-inches, since 2001. With a more accessible sound than the punkish Coachwhips, Thee Oh Sees mines the psych-garage sound popular in the Bay Area. Dwyer wrote and played all the instruments on last year’s Dog Poison, but appears to have enlisted the input from his band on this year’s Warm Slime — organist Brigid Dawson (who also contributes vocals), guitarist Petey Dammit, and drummer Michael Wayne Shoun. The move paid off: the album kicks off with the stomping, highly reverbed fuzz rock of the title track (clocking in at more than thirteen minutes), setting the tone for six more tracks of upbeat jangly-ness and sonic freak-outs. Having recently played an All Tomorrow’s Parties show in England, the band is now touring across Europe and will return to the Bay Area in July, when it will play a handful of local dates. MySpace.com/ohsees (K.W.)

Blacklisted: How The Oakland Police Department Discriminates Against Rappers and Music...