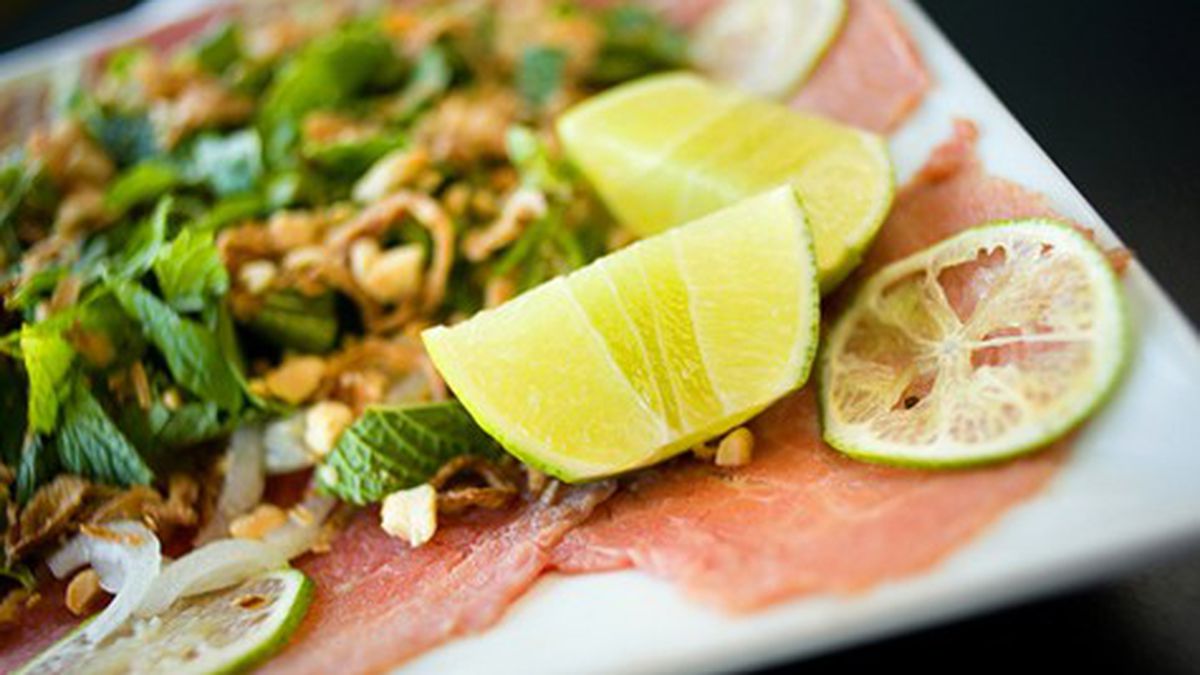 Sidestreet Pho — a Vietnamese restaurant located, yes, on a side street in Alameda — specializes in street food, but at first glance there’s nothing “street” about the place. The dining room is sleek, modern, and sparkling clean. Behind the bar, attractively backlit Buddhas and bottles of booze are lined up side-by-side — accoutrements of the Upscale Asian Restaurant, which sometimes serve as a warning to savvy diners: “Beware, here lie jacked-up prices and watered-down flavors.”

But Sidestreet strays from that narrative. When Hanh Nguyen opened the restaurant in February, she wanted to introduce Americans to a wide range of Vietnamese street foods — to pho, of course, but also to hu tieu and banh canh (“big noodles”) and broken-rice plates. She wanted diners to enjoy these dishes in a pleasant environment, but she also wanted to preserve the traditional foodways she grew up with.

So it is that at Sidestreet Pho you’ll find the kind of funky flavors (huzzah for fermented shrimp paste) and out-of-the-way ingredients (pig’s blood cakes and durian smoothies, to name two) that aren’t uncommon at the long stretch of divey pho joints on Oakland’s International Boulevard, but often get omitted at upscale Vietnamese restaurants for fear of offending delicate Western sensibilities. Here, atmosphere doesn’t come at the expense of authenticity. More importantly, the food tastes great.

Rather than focus on one regional cuisine, Sidestreet takes diners on a kind of culinary tour of Vietnam — from Saigon in the south, where Nguyen was born; to the central city of Hué; to Hanoi, the northern capital where the family of Nguyen’s husband, Minh (co-owner of Cafe Q next door), is from.

Mostly, though, what the restaurant serves is noodles: stir-fried noodles and noodle soups; rice noodles and egg noodles; flat, thin noodles and noodles that are round and spaghetti-like; noodles made of seaweed and cassava flour; and, in a nod to the Chinese, noodles woven into a nest and then fried.

But it was the quality of the beef broth, not the noodles themselves, that set Sidestreet Pho’s namesake dish apart — complex and delicate, with a savoriness born of many bones cooked for many, many hours. For its mix of different cuts with contrasting textures, my favorite of the fifteen or so pho options was the dac biet (“house special”), which came with fatty brisket, comparatively lean flank, crunchy tripe, and tender eye-round. It’s worth paying an extra dollar to get the slices of raw eye-round on the side (rather than cooked ahead of time) — the one time we didn’t, the meat wound up tough and overcooked.

As tasty as the pho was — as good, I’d say, as bowls I’ve enoyed at my favorite Oakland spots — Sidestreet offers a unique opportunity to sample many lesser-known Vietnamese noodle dishes. The bun bo Hué, for instance, featured round noodles, slippery cubes of congealed pigs’ blood, slices of steamed pork sausage with the texture of fish cake, and a spicy beef broth infused with citrusy lemongrass and the pungency of fermented shrimp paste — a funky, flavor-packed bowl, though the chiliheads in our group longed for more heat.

One of the biggest revelations for me was the Chinese-inflected pho ap chao thap cam. It’s basically old-school Cantonese-style crispy chow mein — complete with the baby corn, assortment of meats, and goopy sauce — but instead of egg noodles, the dish is served over a “bird’s nest” made of fried pho noodles. Something about the texture of the noodles (equal parts crispy and chewy) and the way they soaked up the sauce made this dish incredibly addictive.

If you want to avoid noodles, your options will be more limited. One highlight was the banh mi bo ko, a hearty bowl of velvety beef stew — heavy on the star anise — that’s served with a loaf of soft bread that you tear apart for dunking.

Even better was the beautiful rare beef carpaccio appetizer: bright-red, paper-thin discs topped with a nest of pickled onions and crushed peanuts. We ate the tender, lime-marinated beef with the pickles and thin rounds of lime (the rind adding just a hint of bitterness) and, best of all, dipped each slice in a pungent fermented-shrimp dipping sauce that added umami and wonderful depth of flavor.

And don’t sleep on the goi ga, which, despite being listed on the menu, boringly, as “chicken salad” (with no additional description), turned out to be the perfectly balanced union of shredded chicken, crunchy cabbage, mint, crushed peanuts, and a light fish-sauce-based dressing.

In terms of entrées, though, there were noodle-less options beyond the selection of broken-rice combo plates topped with various meats. The rice, literally broken during the milling process, has an appealing texture somewhere between couscous and regular steamed rice.

Make no mistake, though: This is a restaurant for noodle lovers. Even the dishes in which noodles weren’t the star attraction tended to have some noodle component, like the Hanoi-style turmeric fish: a bowl of rice vermicelli topped with airy-light nuggets of turmeric-marinated basa fish; smoky, wok-fried dill; mint; and other assorted vegetables, each in its own little pile. Mix it all together with a healthy drizzle of that fermented shrimp dressing and you wind up with what my Vietnamese dining companion called Vietnam’s answer to Korean bibimbap.

Nguyen told me that in Vietnam, each stall or cart usually specializes in just one type of noodle or other street snack. The soundtrack of her childhood in Saigon was the “tick tock, tick tock” sound of the wooden carts as they made their way down the street outside her house, each with its own distinctive sound.

At Sidestreet Pho, you’ll have to settle for colorful blown-up photos of Vietnamese street scenes — one of a cramped alleyway, another of a young man loading a basket with produce at an open-air market. But it’s the traditional flavors of those carts you’re longing for — the food at Sidestreet might very well take you home.