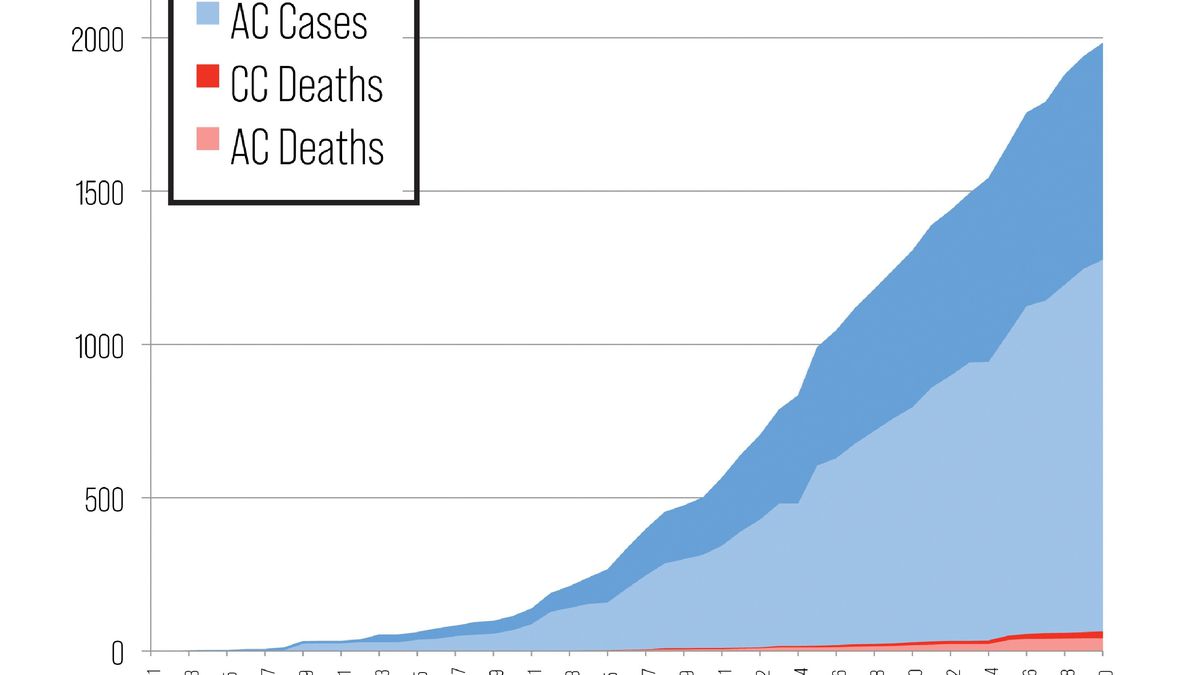 Sick, But Not Diagnosed

The proliferation of presumptive COVID-19 cases highlights the unreliability of data regarding the spread of the disease.

Joshua Davis woke up feverish and coughing on the night of March 11. The next morning, the 29-year-old Oakland resident called his healthcare provider at Kaiser Permanente, where a nurse practitioner prescribed him with Tamiflu. Over the next five days, his flu-like symptoms improved to the point that he felt healthy enough to get some exercise.

“On the sixth or seventh day, I decided to go for a run,” Davis said, “and when I got back I felt like I couldn’t breathe.”

His symptoms had returned, now worse than ever. By that time, six Bay Area counties had issued a shelter-in-place order to slow the spread of the novel coronavirus pandemic.

“I called Kaiser again, described my symptoms, and the doctor said it sounded like COVID-19 in all likelihood,” he said. “There wasn’t much they could do, so their advice was the same as for the flu. They said they had tests, but that they’re saving them for the most critical patients, and to stay in touch if symptoms worsened.”

Although Davis quarantined himself at home and recovered quickly with plenty of rest, he remained concerned that he did not receive a clinical diagnosis. When he asked for a formal notification that he “likely” had come down with the coronavirus, Kaiser sent him a note for work stating that he had a “cough” — just a cough.

“They didn’t seem to want to provide any documentation,” Davis said.

But his ordeal was just beginning. After fully recovering from his respiratory illness, Davis developed kidney stones, and scheduled lab testing with Kaiser to receive treatment. “Then they called back and said that because I had a cough, they would rather give me a prescription for anti-nausea medication and to have someone else pick it up,” he said.

Though Davis hadn’t ever received a diagnosis for COVID-19, Kaiser was treating him as though he had. Eventually, after the medication didn’t work, Davis was able to get tested and confirm the presence of kidney stones. But because hospitals are delaying “elective” procedures in order to treat COVID-19 patients, he was told that he would have to suffer through the excruciatingly painful condition at home.

Davis’ story is not unique. It highlights the much larger problem of how testing for the virus is still woefully inadequate, amid a continuing shortage of testing equipment exacerbated by the Trump Administration’s lackadaisical response to the virus.

As tiny groups of protesters clamor to reopen society — and even citizens who respect the guidance of health professionals grow impatient for a return to some kind of normalcy — the inability of apparent virus sufferers to be tested and formally diagnosed with the disease demonstrates just how far we still are from being able to make sound decisions regarding the prevalence of the disease.

Without accurate data on presumptive cases, the full severity of COVID-19 in California may be far worse. Dr. Eric Topol, professor of Molecular Medicine at Scripps Research in La Jolla, said the issue remains “a huge problem throughout the U.S. because of testing unavailability and underestimating the case rate.”

Testing providers are being forced to prioritize their services for healthcare workers and patients at higher risk. Consequently, many East Bay residents with symptoms of COVID-19 have sought testing and been unable to obtain it. Many others with milder apparent cases are not even trying to obtain a diagnosis, whether out of fear of health facilities, awareness that they are unlikely to obtain a test, or ignorance that their symptoms might be from the virus.

Presumptive cases of COVID-19 that are not confirmed with positive or negative lab test results are not counted in official statistics. County health departments are not requiring these numbers to be reported, and healthcare providers say they’re unable to track them.

Dr. David DeWitt, Kaiser’s National Infectious Disease Leader, said in a statement that the healthcare consortium was complying with Alameda County and other jurisdictions’ request to report laboratory-confirmed cases. “When our physicians identify patients with presumptive COVID in a hospital setting, they immediately provide treatment and instructions as we would if the patient had a positive COVID test result,” Dr. DeWitt said. “We provide any patient with less severe symptoms directions for home isolation and health monitoring, per CDC guidance.” DeWitt added that Kaiser had “neither the authority nor the ability to track a patient to ensure that they are staying home.”

It is not clear why Bay Area health departments are not requiring health providers such as Kaiser to publicly report presumptive cases of the virus. Asked why presumed COVID-19 cases are not required to be counted, county health officials in the East Bay did not provide explanations. Alameda County’s Public Health Department did not respond to repeated requests for comment.

Contra Costa County’s Deputy Health Officer, Dr. Rohan Radhakrishna, said in a statement: “Contra Costa Health Services strongly encourages all providers to test patients for COVID-19 who meet clinical criteria. We understand that testing has not always been possible because of limited supplies, but as testing becomes more available, we want our community health providers to be more aggressive with their testing policies.

“The benefits to testing all patients who meet clinical criteria are many: people take the isolation order more seriously if actually tested, if positive they get a phone call from Public Health which reinforces messaging to prevent the spread and enables more extensive contact tracing to identify more at risk people, accurately counting the true positives in the community helps the public and political leaders know the reality and seriousness of community transmission, higher positive counts could help our county qualify for state and federal resources, and help with evidence-based decisions around the progressive tightening and loosening of restrictions.”

In late March, seven Bay Area health departments, including those in Berkeley and Alameda and Contra Costa counties, ordered private testing labs to disclose comprehensive testing data — not just the positive results. Their order led to an immediate improvement in the quality of our understanding of the pandemic’s scope.

As new data on presumptive cases has emerged, other countries have adapted the ways that they are measuring the pandemic. In France, the death toll was estimated to be undercounted by 40 percent in early April when presumptive COVID-19 deaths of patients who died at home or in elder care facilities were added to the official tally, which previously had only counted confirmed positive patients dying in hospitals. The United Kingdom’s Office of National Statistics estimated on April 3 that 5,797 nursing home residents had died of COVID-19, 15 percent more than the National Health Service count of hospital deaths. The death toll in Belgium surged by 40 percent on April 10 after health officials included hundreds of deaths from previous weeks in the official tally. 1,198 deaths reported in Belgium’s daily epidemiological report on the 10th, nearly half of all coronavirus deaths, were attributed to nursing homes. Dr. Emmanuel André, a clinical researcher in the country’s coronavirus taskforce, said in a press conference most of these deaths did not receive lab tests but were treated as “suspected” cases.

In New York City, where thousands have died of the virus, the death toll surged to over 12,000 after death certificates with COVID-19 listed as a probable cause of death were added to the official tally. City health officials estimate as of April 16 that up to 4,309 deaths in the month since the city’s first confirmed case were “probable” but unconfirmed COVID-19 cases — an average of over 100 deaths per day.

But even those measures appear to be undercounting the pandemic’s true scope. On Tuesday, The New York Times published a story comparing mortality data from 11 countries to demonstrate that death rates have surged by a much greater magnitude than official tallies of virus fatalities would indicate. In New York City, for instance, 17,200 more people died over the prior month than during previous years, while reported deaths from COVID-19 during that period were only counted at 13,240. This suggests that deaths from COVID-19 were undercounted by almost 4,000 cases — and probably more, given that deaths from traffic, crime, or workplace accidents have no doubt declined.

Although the data that is available suggests that California has successfully reduced the rate at which COVID-19 incidence is growing among the population, the absence of data on presumptive cases is distorting the numbers. As of April 16, the state’s Department of Public Health had tracked 30,978 confirmed cases and 1,208 fatalities. The agency also reported 1,417 hospitalized patients with “suspected” COVID-19 infections, but those cases are awaiting test results.

According to a joint statement issued April 12 from San Francisco Mayor London Breed and UCSF, the limit on testing is not due to a lack of lab testing facilities but a shortage of “testing supplies, such as swabs, which limit the number of tests that can be conducted, regardless of lab capacity.”

For his part, Joshua Davis has already passed some kidney stones, but not all. Those that remain cannot be removed until elective procedures can resume, after the pandemic subsides.