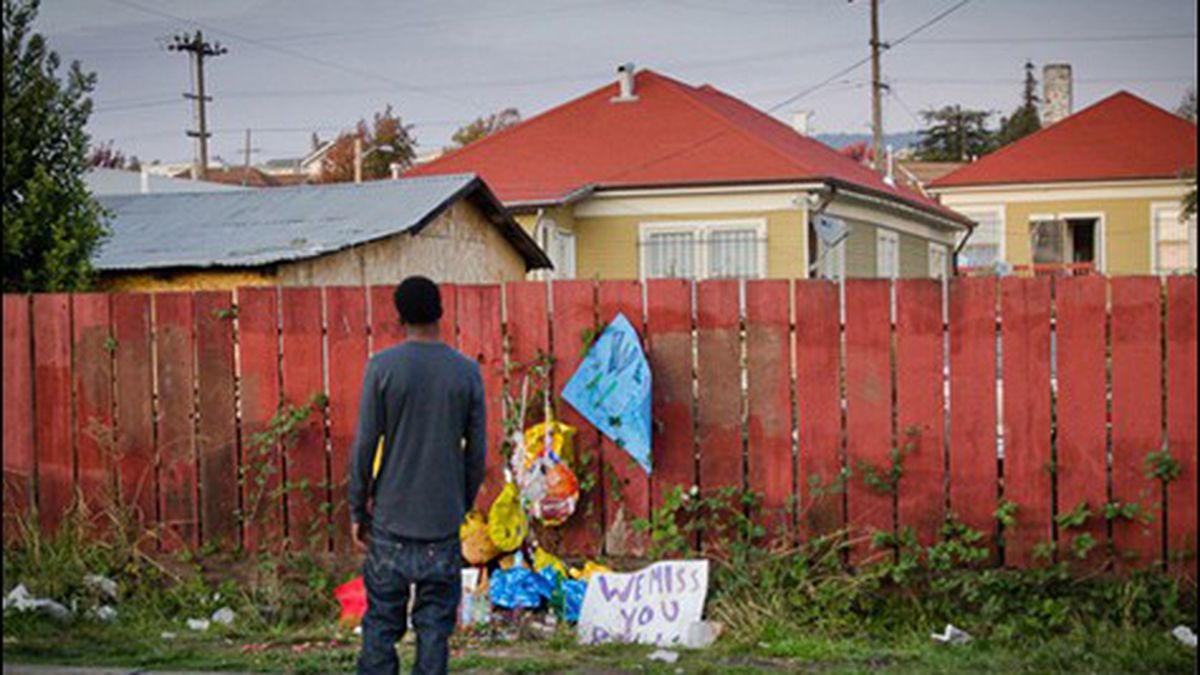 Jonathan Singer-Vine is both a product of Berkeley and an archetype of Berkeley. He’s the son of a scientist and a psychologist, the younger brother of a former Express intern who went on to write for the Wall Street Journal, and the identical twin of a high school-dropout-turned-pop-radio artist. (His brother David used to rap in a group called The Cataracs.) He’s lanky, with searing blue-gray eyes and fine-chiseled features, and clothes that sort of droop over him. He’s part of a long lineage of Berkeley white kids who became fascinated — then infatuated — with urban culture, and then went to great ends to explain their relationship to it.

He’ll probably get mad at me for saying that. But I’m one of them, too.

At 23, Singer-Vine decided to become an indie filmmaker, and naturally his first muse was street life in East and West Oakland. Or specifically, his young African-American counterparts who roamed those neighborhoods. Many of them had gone to school with him, but grew up in a parallel universe.

“I was like, no one’s told this story,” the now-25-year-old Singer-Vine said, standing inside the lobby of California Theatre in Berkeley, the night his new film, Licks, had its hometown premiere. “In a certain year there were more black men in prison than were enslaved.”

He couldn’t remember which year. But that’s not what the film is about, anyway. Licks professes to document large social issues, though it’s actually a guy’s coming-of-age story. It’s also Singer-Vine’s attempt to pin a morality tale on a situation he finds daunting and frustrating, but which nonetheless draws him in. It’s his homage to all the dudes from Oakland and Richmond who coincided with him at Berkeley High, but who came from a different world than the one inhabited by children of scientists.

So when Singer-Vine first got the inkling to write a crime drama about the mean streets of Oakland — apparently needing street cred and cachet — he turned to Robinson for help with the storyline. With Robinson signed on as a co-writer, the two eventually consolidated a whole team of gaffers and producers with various associations: a friend from middle school named Niko Philipides; an army vet named Adrian L. Burrell who they’d met through the local rapper Kreayshawn; and a music-video cinematographer named Rob Witt who attended Berkeley Digital Film Institute. They posted a casting call on Facebook and began auditioning actors at a hip-hop studio in East Oakland, donated by the rappers of Hieroglyphics. Later they transformed Philipides’ father’s woodshop into a cutting room, while shooting on location in the East Bay’s toughest neighborhoods.

The resulting film combines a tepid storyline with the kind of painterly scenes you’d expect to see in a music video. Witt’s stark, neo-noir palette and Ian Ericksen’s melancholy score make the ‘hoods of Oakland look like watercolor paintings, with certain details — the ramshackle buildings, the candy-painted Camaros, the iconic cranes — bristling against the dishwater-gray skies. Most importantly, the actors — two of whom were plucked from a family-run Shakespeare troupe — create a realistic portrayal of male ennui in the ‘hood.

And indeed, there’s a lot of ennui in the ‘hood. The lead character, D (Stanley “Doe” Hunt), provides a wobbly moral compass, renouncing his old ways after two years in the pen for a botched liquor-store robbery. (The film’s title refers to the slang for a hold-up.) He returns to a world that seems even more dismal and unpromising than the one he left. His once-innocent girlfriend, Aliki (Tatiana Monet), is strung out on drugs. His friends are living off the spoils of burglaries and sex trafficking. His mother is facing eviction. His parole officer is a scold. D never overtly complains about being trapped in a bad situation, but his sidelong glances out the window speak volumes.

If there’s one thing that Singer-Vine excels at, it’s conveying male pathos. If you like poignant, bruising, achingly well-executed depictions of dudes brooding in the ‘hood, Licks is larded with them. Amid the insult-volleying and occasional beatings in dark alleyways, the film supplies a long succession of meaningful close-ups — of D staring at the ceiling, or Rell (played by Hunt’s brother, Koran Streets) studying an old photograph of Martin Luther King, or of Ty (Devon Libran) and D sitting on the dock, gazing over the San Francisco Bay.

What’s lacking, unfortunately, is a fully fleshed-out female character. That’s particularly problematic because Licks tackles such issues as childhood prostitution and domestic violence — albeit in a rather myopic way. The women are all stock characters — two no-nonsense matriarchs, three prostitutes, one “fallen” waif, and none of them ever question their circumstances. The younger women’s fortunes depend entirely on the men who manipulate them; the older women serve only to guide those men along.

Singer-Vine seems to realize its shortcomings. Asked about the absence of female characters, he responded, “You know, you’re not the first person to point that out.”

There’s a certain shortsightedness to Licks in general, which probably owes more to the producers’ youth and inexperience than anything else. The dialogue seems true-to-life, and Witt’s gray, claustrophobic landscapes make fitting metaphors. But there’s no larger meaning being telegraphed. We already know that life is hard in the ‘hood, and that desperation leads people to hurt one another. The film clings to these notions and never gets beyond them. It’s as though someone took The Wire and scraped out all the complexity, leaving only a wan storyline and a lot of bloodshed.

Yet there’s a certain honesty to Licks, in that it genuinely reflects the sensibility — and naïveté — of the guys who made it. It’s a film that exists because an affluent white dude and a popular black dude got together and pooled their resources. The product looks professional and aspires to greatness. The movie is touring the festival circuit — it graced South by Southwest and Oakland International Film Festival earlier this year — and many critics are calling it a film to watch. It’s easy to imagine Singer-Vine, Philipides, and Robinson going on to produce better work, and getting recognized for it.

Singer-Vine says his role model is Harmony Korine, who, at age nineteen, wrote Kids — another movie that tried to capture an urban environment at a particular moment in time, albeit in New York City, rather than Oakland. That comparison seems apropos.