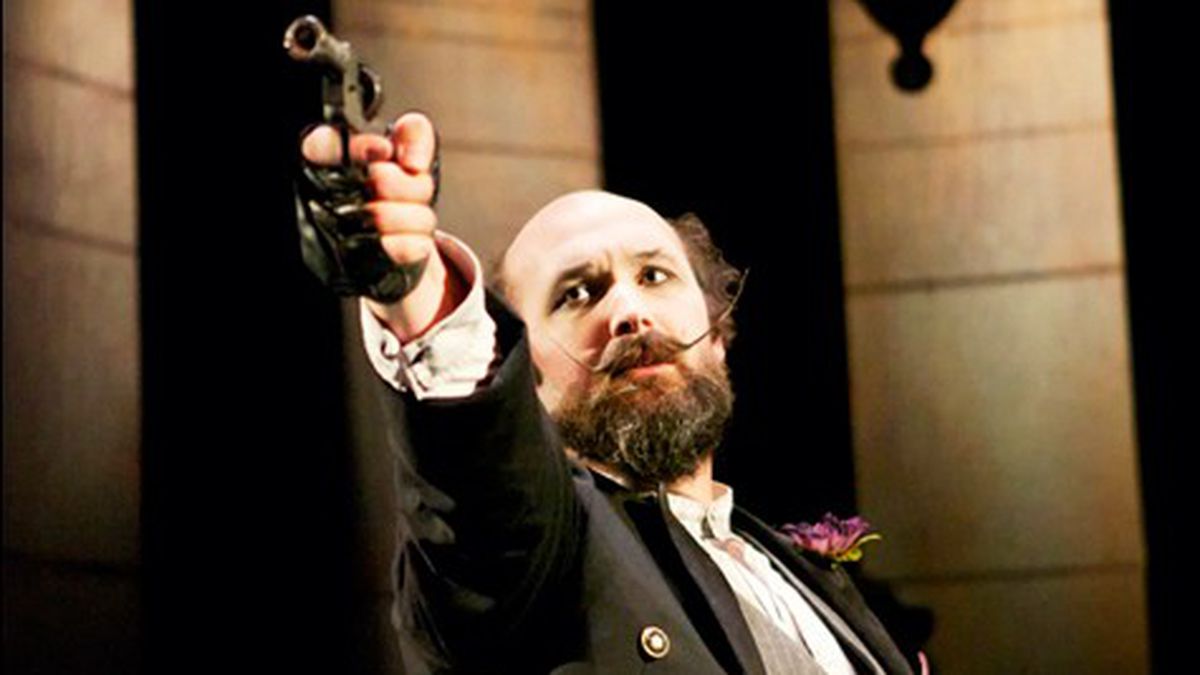 A plucky tongue-in-cheek tribute to presidential assassins, just in time for the election.

“Hey pal. C’mere and kill a president,” calls a carnival barker at the Ashby Stage, who invites folks to plunk down a coin, pull the trigger, aim for the target, and win a prize. In Assassins, Stephen Sondheim’s musical comedy salute to presidential assassins, the top-shelf prize is eternal infamy.

The Shotgun Players have staged a superb rendition of Assassins, Sondheim’s delectably offbeat 1990 musical. Staged as a grotesque carnival, the production trots out a murderous lineup of sad sacks and misguided misfits who fired on Presidents Lincoln through Reagan. The play asks the question: “Why’da do it?”

The answers range from traitorous to Jodie Foster. The shooters are bizarre buffoons and poor slobs — some angry, most of them crazy. Tapping into the aesthetics of Edward Gorey, Bertolt Brecht, and Tim Burton, Susannah Martin’s inventive production mixes sideshow freakishness, societal disenfranchisement, and human desperation into one big ball of delicious, sickly-sweet cotton candy. Sondheim’s play also invokes Kander and Ebb’s musical Chicago, which used showmanship and razzle-dazzle to comment on the cult of celebrity.

A banjo-strumming balladeer, embodied impeccably by Kevin Singer, sings of the nine men and women who got it in their head to assassinate the president. An old-timey folk singer and a one-man Greek chorus, he sings of these anti-heroes in the genres of country bluegrass, delta blues, and big-band jazz.

“The Ballad of Booth,” a jangly country tune about the nation’s first presidential assassin, is both flip and sincere. The song’s rhymes and rhythms mock the gravity of the crime and offset the lyrics’ otherwise overbearing peachiness: Angry men don’t write the rules and guns don’t right the wrongs, sings the balladeer. Galen Murphy-Hoffman plays the dashing impassioned John Wilkes Booth, Lincoln’s assassin, who scribbles his pro-confederate motives in his diary. Damn, you Johnny/You paved the way, the balladeer sings. One of the legacies of Lincoln’s assassination was that such an idea was now in place.

The assassination of John F. Kennedy by Lee Harvey Oswald (also played by Singer) is the disarmingly unadorned center of the Assassins vaudeville. We’ve seen the clownish Charles Guiteau, played by Steven Hess, assassinate President Garfield because he wanted to be ambassador to France. We see Sara Jane Moore (Rebecca Castelli) shooting at her Kentucky Fried Chicken bucket as she gears up to shoot Ford. We watch Sam Byck (Ryan Drummond) making a tape for Leonard Bernstein and plotting to bomb Nixon’s White House. But it is Oswald’s inner turmoil that smartly relieves the flippancy of the play and gives Assassins a greater dimension. The play shifts tone to psychological realism as Booth eloquently gives voice to Oswald’s hopelessness. Invoking Willy Loman, Arthur Miller’s downtrodden Everyman, Booth explains that “attention must be paid.” Certainly, all these assassins crave attention. By reframing Oswald as a Loman figure, Kennedy’s killer takes on a tragic dimension, and the play takes itself seriously for a much-needed minute. But just for a minute.

As the ghoulish proprietor, Jeff Garrett coaxes his patrons to blow off some steam by shooting a president. A barbershop quartet of assassins harmonically inveigles the disgruntled: All you have to do/Is move you little finger, crook your little finger and you can change the world. In “The Ballad of Guiteau,” James Garfield’s killer marches triumphantly to the hanging noose, singing, I am going to the Lordy, I am so glad. Hess is wonderfully bizarre as Guiteau. His Pentecostal hymn bears resemblance to Eric Idle’s cockeyed crucifix ditty “Always Look on the Bright Side of Life.”

In one of the funniest numbers, John Hinkley (Danny Cozart) and Squeaky Fromme (Cody Metzger) bond over their undying obsessive devotion to Jodie Foster and Charles Manson, respectively. Cozart plays Hinkley as a love-sick sap, hoping to impress the actress by shooting Ronald Reagan. Metzger plays the hippy waif and Manson girl Fromme, who shoots Ford so Manson can get back into the spotlight.

As Sam Byck, Drummond is a more comical Loman figure. Wearing a Santa suit and prone to sing from West Side Story, he plots an elaborate assassination of Richard Nixon. Castelli is dazzling as Moore, the eccentric housewife who shoots Colonel Sanders much better than she shoots Gerald Ford. She’s the singer with serious chops in this show.

Under David Möschler’s deft musical direction, the musical numbers, with an onstage band of trombone, trumpet, bass, and mandolin, are inventive and wonderful. Erika Chong Shuch’s choreography and Christine Crook’s costumes add to the tantalizing spectacle.