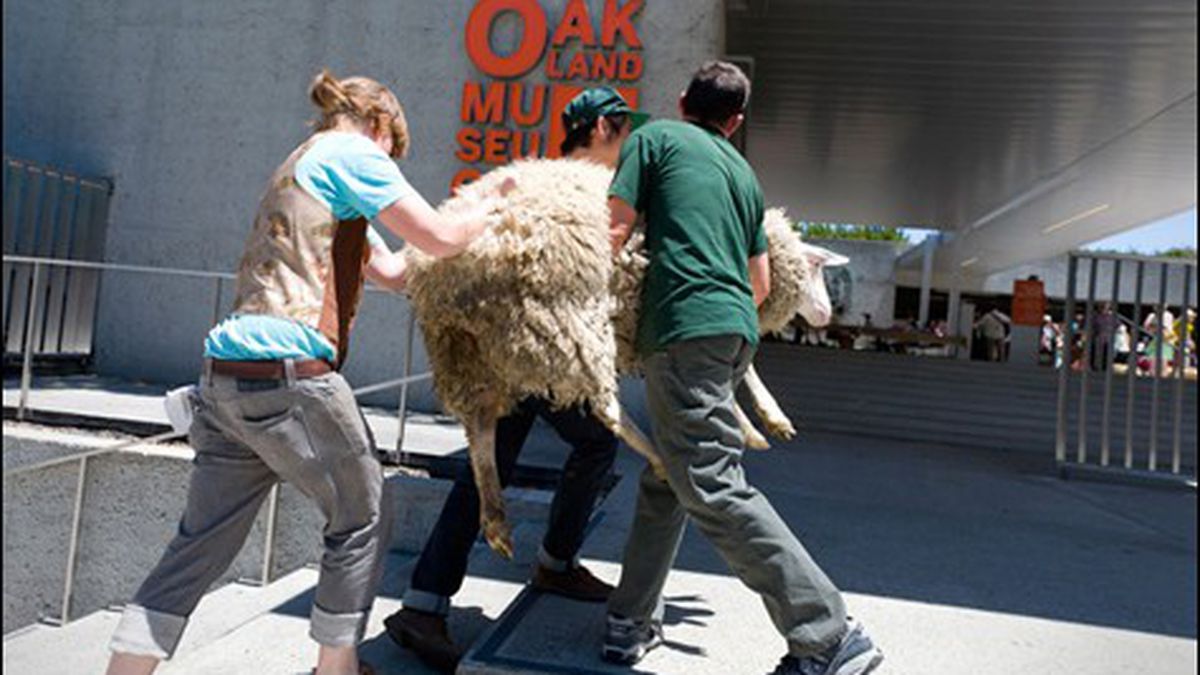 It wouldn’t be a stretch to say that the scene at the Oakland Museum of California’s Oak Street Plaza (1000 Oak St., Oakland) was something of a zoo one Sunday afternoon last June — although “farm” is probably a more apt designation. That’s because the 3,600-square-foot plaza that serves as the museum’s main entrance was occupied by a pair of sheep. What’s more, that day’s visitors got to watch a certified sheep shearer give the animals a haircut, observe artists card wool by bicycle and fashion rugs from felt, and view a screening of Sweetgrass, a visually mesmerizing, nearly dialogue-free documentary that follows a flock of sheep through the mountains of Montana.

In short, sheep were the order of the day. And “Felt,” as the event was titled, marked the first installment of Seed Circus, a four-part program held at the Oakland Museum last year and organized by The Oakland Standard, an OMCA offshoot formulated to introduce more experimental, interactive programming to the museum’s grounds. Specifically, Seed Circus — just one of about ten events orchestrated by the new program’s organizers in 2011 — was an attempt to merge the urban environment with the natural world through thematic, hands-on demonstrations and discussions, and part of a broader effort by museum curators to attract a younger, hipper crowd.

“There were definitely people who were shocked that we had sheep shearing here,” recalled Sasha Archibald, The Oakland Standard’s project coordinator. But that’s arguably the sort of reaction that she and the project’s other organizers have been trying to provoke through an offering of quirky events and projects that, sheep aside, have included outdoor knitting circles, turf dancing performances, and dandelion wine tastings — programs that are, in a word, bold. But “bold is good. And bold ruffles feathers, too,” Archibald reasoned. “In a lot of ways this is a new approach to programming for the museum.” It’s also an approach that has benefitted from lots of flexibility and openness to experimentation from the Oakland Museum, which Archibald said has granted them free reign for the project.

Now in its second year of public programming (organizers spent two years determining their audience and strategy before launching the first event), The Oakland Standard continues to operate through a grant from the James Irvine Foundation, a California-based nonprofit that is funding the endeavor through June. The first event of the new year, “Living Concrete,” features live mural painting on the museum plaza by Oakland graffiti artists Ras Terms, Safety First, Resta, and Tecka. The free event on Saturday, January 21, guest-curated by Kristi Holohan of Rock Paper Scissors Collective, includes music by a live DJ and food for sale from the North Oakland mac ‘n’ cheese restaurant Homeroom. Archibald called the graffiti-themed affair an embracement of contemporary art: “Whether it happens in a gallery or museum or in the streets, those boundaries don’t seem to mean as much as they used to,” she said. And it’s that testing of boundaries that seem to be what The Oakland Standard is all about. 11 a.m.-5 p.m. 510-318-8400 or MuseumCA.org/theoaklandstandard