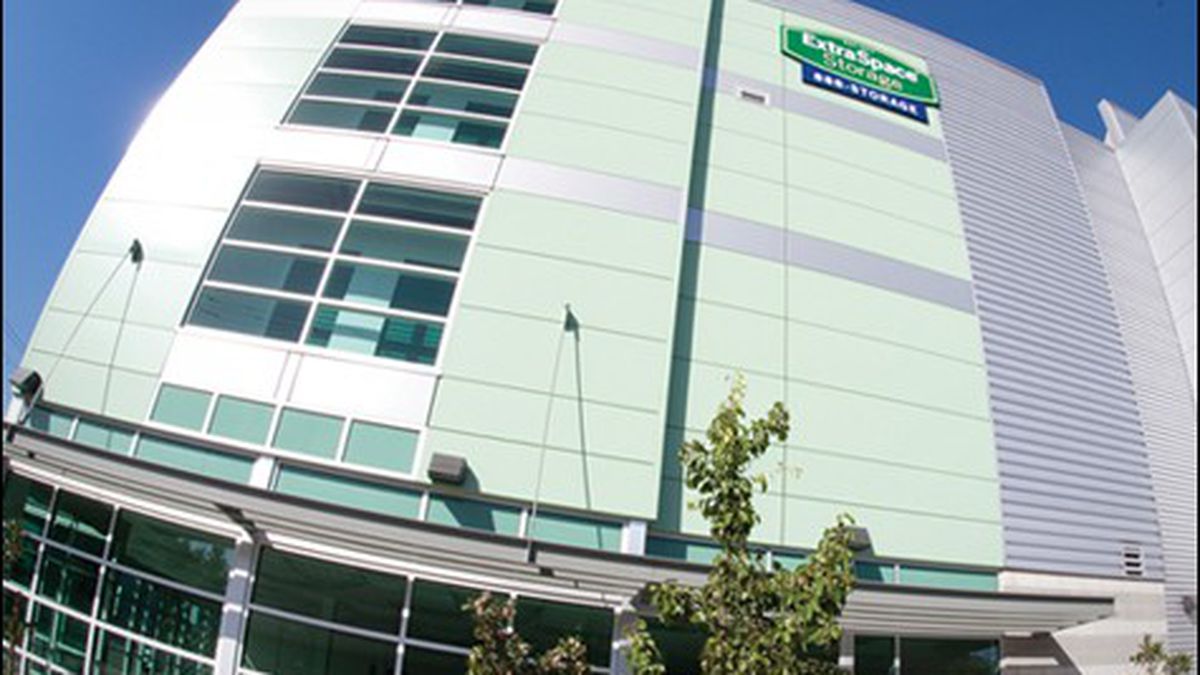 Self Storage and the World of Hoarders

In the Seventies, self storage was all about relocation. Now it's a lifestyle -- even for some homeless people.

The new Extra Space Storage facility in Emeryville doesn’t at all resemble the stereotypical self-storage building. It has no concertina wire or cheap, corrugated aluminum shedding. It’s not seedy or run-down, with semi-trucks in front, or shady guys kickin’ it in the parking lot. It’s a big, blocky, geometric high-rise with baby blue walls and polished windows. To casual observers, it could be a high-end loft apartment. You wouldn’t even be able to tell it’s a storage facility but for the backlit windows on the upper floors. They reveal those gray roll-up doors, which have become an icon for the four-decade-old industry. This design is no anomaly. These days, new self-storage facilities typically have to look clean and attractive to pass muster with city planning commissions. At some level, this helps to mask the thread of personal tragedy that runs through self storage. It also reflects a shift in the industry’s function, from serving people “in transition,” to creating mausoleums for human detritus.

Many people thought the foreclosure crisis would be a boon for self storage. “Historically, the perception has been that in really good times storage does okay, and in bad times, we do better,” said Ken Nitzberg, co-founder of Devon Self Storage chain, and former chair of the national Self Storage Association. That seems logical: People being forced out of their homes would need a place to put their stuff, right? Some operators had the same thought. Michael Sarasua, the building manager at West Oakland’s Beacon Self Storage at the corner of Grand and San Pablo Avenues, said his company goes online to find neighborhoods with lots of foreclosed homes, and then targets the residents with mailers.

But Sarasua said he has experienced only minimal success with that type of marketing. Mostly, he relies on students, commercial tenants, and, oddly, homeless people to sustain his business. “I don’t have that much people who store with me under foreclosure,” Beacon said. “There are a few, but if you arrange it by person it’s 5 percent only. They usually rent for only a few months.”

In reality, foreclosures constitute only a fraction of the conditions for self storage, said Tim Dietz, current chair of the association. “While people are being foreclosed on, they’re struggling financially,” he explained. Thus, they’re less likely to waste precious disposable income on storage. He calls the self-storage industry recession-resistant, not recession-proof. It experienced a boom between 1998 and 2006, then tapered off in 2007 and 2008, mostly because of over-building. “The industry is flat to down 10 percent, like many real estate sectors,” Dietz said.

What has changed, though, is the number of people who are using it not as a stopgap measure but as a lifestyle choice. When self storage had its genesis in the 1970s, it was mostly for people who were moving. To a certain extent, that’s still true. According to Dietz, between 30 and 35 percent of self-storage users come from distressed circumstances — meaning they’ve suffered divorce, a death in the family, or job loss that forced them to move to a smaller dwelling. Some are, indeed, victims of the foreclosure crisis. Other patrons are students, or in the military. But the 1980s saw a new class of tenants, who now constitute roughly half of the industry’s clientele. These are the permanent residents, business owners who use storage facilities to keep files or other accoutrements, or residential hoarders who have the wherewithal to rent out a storage unit and treat it as a garage.

That’s terrific for an industry once built around transience. Since all storage leases are month-to-month, Nitzberg said that he plans for 100 percent turnover each year. But, like any business operator, he’d prefer his clients to stick around longer, ensuring him a higher occupancy at all times. Longer-term self storage became a much bigger trend a few decades ago, Dietz said. “It took 22 years for the industry to build its first billion feet,” Dietz said. “It’s second billion only took seven years.”

These days, only about half of the industry’s tenants are in some sort of “relocation” situation. The longer-term clientele vary from neighborhood to neighborhood. Some are hoarders, said Shari Dudek, who manages High Street Bridge Self Storage in East Oakland. “A lot of people would put files away, or Christmas ornaments,” she said. Dudek added that some people might rent a longer-term storage unit after experiencing a death in the family. “They have to put stuff away until you can deal with it,” she explained.

In West Oakland, many self-storage clients are homeless, meaning they have enough money to house their stuff, but not enough to house themselves. Sarasua says that a lot of his tenants — possibly as many as a third — are either living on the street or in single-room-occupancy hotels. Some come in every morning when the facility opens and leave with a different change of clothes. That’s probably a function of his location, since Beacon sits across the street from a block of skid row motels, and a little park where homeless people hang out during the day. Reynard Porche, who manages a StorageMart just down San Pablo Avenue from Sarasua’s facility, says that only about 2 percent of his clients are homeless. “Some of them they have clothes, so they’re storing their clothes,” Porche said. “Some have little keepsakes that they don’t want to have on the streets with them at night.”

Nitzberg, who currently runs 48 storage facilities and has had many homeless clients in the past, said that his property managers currently use more discretion in choosing their clientele. “A majority of our tenants who sign leases are women,” he explained. “They don’t like having a homeless person changing clothes in the aisle.”

But no matter how much the property managers try to discriminate, self-storage facilities still serve a lot of marginal people. The lien laws in California stipulate that if a tenant flakes on rent for a couple months, the storage operators get to shut down his unit and auction his stuff. “There’s a whole cadre of people who go from auction to auction,” Nitzberg said. “You ever go to the Saturday flea market? That’s where a lot of that stuff comes from.”

Thus, self storage has its own cycle of death and renewal. You wouldn’t necessarily know that by visiting the new Extra Space in Emeryville, with its glistening, hyper-modern architecture and bland interior. Each floor is a matrix of long corridors and identical roll-up doors: 800 units total. Behind those doors are mountains and mountains of stuff.