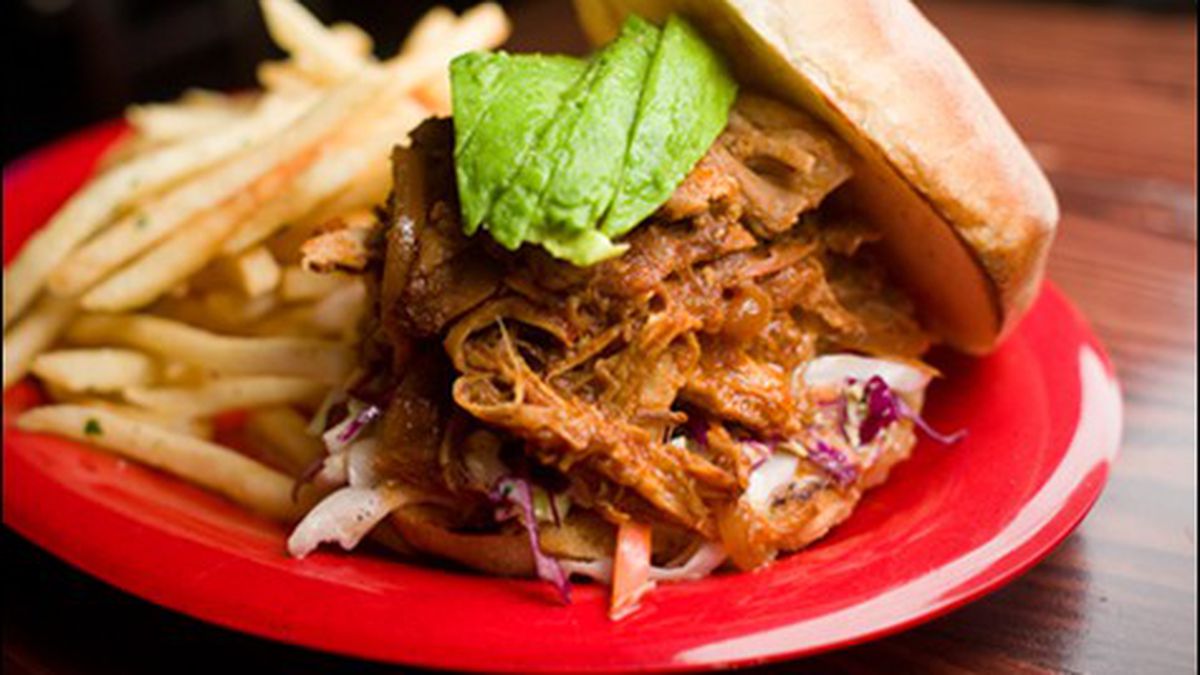 Score One for Up & Under

When the summer of 2010 goes down in local history books as the foggiest in recent history, a chapter will be set aside for the unexpected heat wave of Tuesday, August 24. With temperatures breaking the century mark and the parched air at a standstill, the Bay Area’s sun-bleached streets were as empty as Firenze at siesta time. Alameda’s beachfront attracted scores of the sweat-slick and prostrate. Strangers traded up-to-date meteorological info with the fascination of scientists tracking a hurricane. And this writer headed to the hamlet of Point Richmond for cold beer and hot cactus in a laid-back, shadowy saloon with one overarching theme: rugby.

The Up & Under is the brainchild of Nathan Trivers, a Sacramento boy who’s been playing rugby since high school in such far-flung places as Wales, Ireland, and Australia. He’s converted his passion for the sport into a place where flankers and wingers can hoist a few in convivial, scrum-centric surroundings. The century-old building that houses the joint dates back to the days when Point Richmond was a rollicking bayside party town with 42 bars and enough fun-loving clientele to support each and every one of them. Over the years, the wedge-shaped edifice has served as brothel, rooming house, and a succession of saloons and restaurants. Until fairly recently it was a dark, seedy dive with boarded-over windows and a smoky milieu not encountered anywhere else in the quaint, Victorian-limned Point Richmond Historic District. This past January, Trivers reopened the place after two years of careful restoration, including the installation of a magnificent, eight-foot-tall, Captain Nemo-esque front door with seven hinges and a porthole. On the sweltering night in question, it was thrown wide open to beckon any miserable breeze that might be stirring.

Once inside the dark recesses, we made our way to the long, copper-topped bar, purveyor of cool cocktails and icy lagers served beneath light fixtures crafted from re-sewn rugby balls. The Up & Under is North America’s first and only rugby pub, and you wouldn’t mistake it for anything else. Vintage rugby jerseys and other paraphernalia (including a framed photo of the gold-winning 1924 US Olympic team) hang from the wood-paneled walls. The Rugby Channel plays on the flat-screen above the bar more or less continuously. Back numbers of Rugby and Rugby World are available for perusal, and rugby paintings, posters, and artwork cover every square inch of wall space. Other striking decorative accents include Olde English lanterns, a throne complete with crown, acres of exposed brick, a gleaming pressed-copper ceiling, tables wrought from thick slabs of redwood, and a variety of mantles, hearths, and carved wooden figurines. The old back entrance still has its speakeasy peephole, and the restrooms feature Vetrazzo sinks inset with recycled broken booze bottles.

We weren’t just there for the suds and the atmo, of course. Tuesday night is trivia night, and there was food to be had as well, so we kicked things off by acing the first five questions (Michigan, Buddy Holly, Helen Hunt, Lord of the Flies, and the year 1952) and scarfing beer-battered cactus, filet-mignon sliders, and a platter of five sausages. The cactus was too heavily breaded (nice chipotle aioli, though), but the sliders were packed with blue cheese and onions and were juicy and smoky to boot, while the links (bratwurst, banger, Italian, habañero, and kielbasa) not only offered a mini-smorgasbord of individual tastes and textures, all of them yummy, but also came with a killer mustard dipping sauce.

A bit of a setback as we fumbled the anagram and the acronym and failed to convince the quizmaster (an otherwise affable sort) that Honolulu is south of Austin. Happily, there was a crisp, light Caesar at hand as well as another salad, the Home Turf, a tasty mix-up of greens, feta, dried cranberries, candied almonds, and a bracing mustard-balsamic vinaigrette — just the thing on a hot evening. They came with The Prop (like everything else on the menu, the sandwiches are named after different rugby plays and positions), a generous pile of sweet, tender, peppery pulled pork served on a bed of unexciting coleslaw and a nice, chewy ciabatta bun. The Hooker grilled-cheese sandwich wasn’t as successful: not enough jack, cheddar, and gouda on too thick a slab of sourdough. The Scrum Half (aka fish and chips) involved a big, meaty chunk of cod and just a bit of breading — not the crisp, tender classic we were hoping for, but the fries were pretty good. The bacon-stuffed chicken was also on the perfunctory side despite all the caramelized onions, juicy mushrooms, and melted Gouda that came with it, but the side of scalloped potatoes was a treat: cheesy, tender, and comforting.

The Up & Under isn’t exactly a vegetarian’s mecca, but there are enough meat-free items on the menu to keep ’em satisfied between all those scrums and drop kicks. Start off with tomato-cilantro bruschetta, fried mozzarella balls, or beer-battered cactus. Sandwiches include the grilled-cheese Hooker and the Winger, portobello, eggplant, cactus, red pepper, provolone, and pesto on focaccia. Among the entrées is the “B” Side, fried polenta served with grilled veggies and a thick marinara sauce.

For dessert we had an excellent peach, blueberry, and blackberry crisp, s’more sandwiches with too much graham cracker and not enough chocolate, and the wonderfully endorphic Muddy Cleat: rich chocolate cake with a gooey chocolate center and chocolate sauce and chocolate ice cream on top. Just outside the door a train chugged by, evoking all sorts of memories. And a welcome blend of kids, old folks, hipsters, and families sipped and nibbled and chatted and fanned the evening heat away. The Up & Under may need to trim the starch from a few of its dishes, but the setting is incomparable, the vibe is friendly, the crowd is diverse, and at 8:22 p.m., a faint breeze wandered through the hall. Won the pub quiz, too!