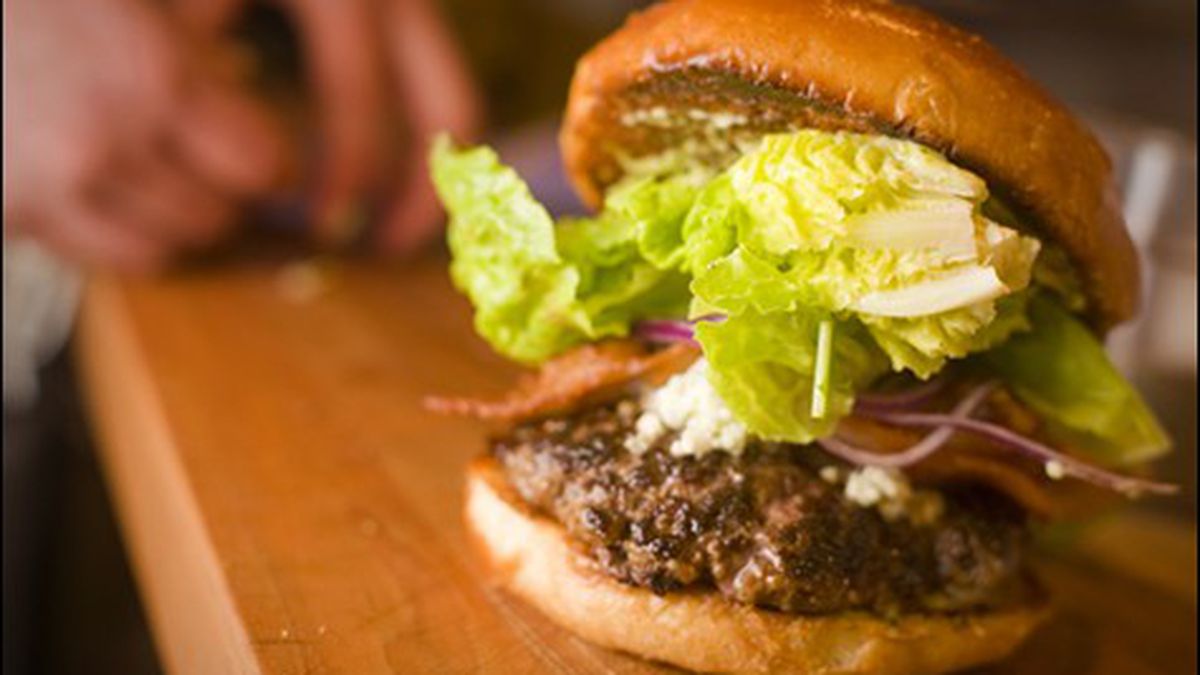 One of the few good things to come from the tanked economy is the realization that you don’t have to go to a three-star five-course prix fixe dining palace to eat well. Many talented yet underemployed chefs have practiced their craft in humble alternative settings like takeout windows, food carts, grocery-store deli counters, and other venues appropriate to their discerning if financially challenged target clientele. Organic and sustainably raised seasonal ingredients have been deftly and imaginatively employed in hearty, delectable offerings that reinvent the concept of fast food for the farm-to-table era — even if they are enjoyed in a saloon, on a park bench, or in front of the TV.

One of the best examples of this burgeoning cuisine is Scolari’s, a takeout joint in downtown Alameda that opened this past August. It’s co-owned by Dan Nichols, who also runs the popular Lucky 13 watering hole next door, and Michael Boyd, a chef and restaurant consultant with an inventive culinary outlook and a fondness for local, seasonal, sustainably farmed foodstuffs. Their chosen cuisine is traditional takeaway comfort food, and at Scolari’s they serve reconceived, made-from-scratch American vittles that are creative, palate-pleasing, and inexpensive enough to satisfy any budget-conscious foodie.

A brief basic menu is augmented with several daily specials based on the season and what’s available from the farmers’ market, Dan’s Fresh Produce, the Feel Good Bakery, and other local resources. One ongoing presence is a classic stromboli, a sort of rolled-up calzone invented in New Jersey (or was it Philadelphia?) in the 1950s. (Boyd is a New Jersey native, and other Jersey menu standbys include meatball toasties and the Tribeca Oven bakery challah buns used in the house burger.) Although Scolari’s stromboli was heavy on the dough, the ham, salami, and pepperoni mingled marvelously with the gooey melted mozzarella, and the chunky tomato-basil dipping sauce was irresistible. There’s also a vegetarian option offered daily; one variation stuffed with earthy spinach, snarky black olives, bits of chili pepper, and puckery goat cheese was reminiscent of a lush, hearty spanakopita.

The crispy hot dog gets its pungent, salty, sausage-like flavor and rich, snappy texture from the fact that it’s deep-fried in oil (yum) and charred till nice and black on the outside and creamy on the inside. Served on a toasted bun with yellow mustard and a pickly, peppery relish, it was a simple, delectable treat. Cindy’s salad, another regular menu item, was a gardener’s bounty of mixed greens; mint and basil; red onion and scallions; and chopped fennel, celery, and cucumber, tossed with diced jalapeno and a light apple cider vinaigrette: a refreshing contrast to the more robust selections.

Depending on the time of year and the chef’s inclinations, the daily specials might include turkey stew, whole Dungeness crab with garlic butter, split-pea soup with crispy pork belly, or seared Cypress Island salmon with greens and mushrooms. The star attraction one night in November was a perfectly tender and juicy steak, smoky on the outside and rare in the middle, accompanied by braised kale with lots of garlicky olive oil flavor and a nice pumpkin potato mash ribboned with peel but lacking that sweet-earthy pumpkin taste. Another entrée combined minced spicy, mustardy chicken with purple onion, red cabbage, celery, and parsley, served on three mini-beds of soft butter lettuce: lusty yet refreshing. Two snack items were equally yummy: three hearty, oniony Sloppy Joe sliders served on little brioche buns, and a classy California cuisine ham biscuit — a soft, yeasty corn scone studded with bits of smoky pig meat, filled with melted tongue-tingling horseradish cheddar and lots of brisk, peppery arugula to cut the richness. There’s also a daily pizza or two; the margherita was thin-crusted and kind of limp, but with lots of good, greasy, barely spicy flavor. Dessert options are limited but often include a couple of varieties of cannoli. The pumpkin variation had a runny filling that contrasted too sharply with its chocolate chips, but the traditional featured a crunchy, delicate shell and a dense, creamy filling.

Although Scolari’s basic menu is heavy on the burgers, hot dogs, and pepperoni-packed stromboli, vegetarians will find more than enough meat-free items to keep them happy. In addition to Cindy’s salad, the Buffalo fries, and the meatless stromboli du jour, seasonal fare might include Brentwood corn hush puppies with cayenne honey butter, summer squash crostini with goat cheese and Thai basil, padron peppers with lime and sea salt, and empanadas stuffed with sweet potatoes, caramelized onion, and chipotle.

You don’t have to get your food to go, although the closet-size storefront (a former nail salon) has only six stools, plus a few tables out on the sidewalk. It’s a cheerful-looking place, with pumpkin-colored walls, vintage Borden’s Milk and Coleman’s Mustard signs, a butcher-block counter, and an open kitchen where diners can watch the crew creating and kibitzing. The daily specials are written on a big blackboard in several colorful hues of chalk, the affable staff (“how’s the cannoli?”) creates a friendly, homey neighborhood vibe, and the place serves its full menu until three in the morning Thursdays through Saturdays, making it one of the few places in the Bay Area where you can dine well after last call. A good takeout destination, though, is the Lucky 13 next door, which is the only place Scolari’s delivers to and also serves as the restaurant’s living room. Not only is pool, pinball, and a jukebox available for after-dinner entertainment, but there’s a roomy garden out back, a full bar, and twenty top-shelf varieties of draft beer including Sacramento’s Rubicon IPA and Fort Bragg’s Scrimshaw Pilsner. (The strongest beverage on Scolari’s menu is soda pop.) It’s a pleasant place to enjoy a plate of Buffalo fries with blue cheese and celery, a hormone-free burger, and a stromboli packed with pumpkin, kale, and cashews. This is fast food worth lingering over.