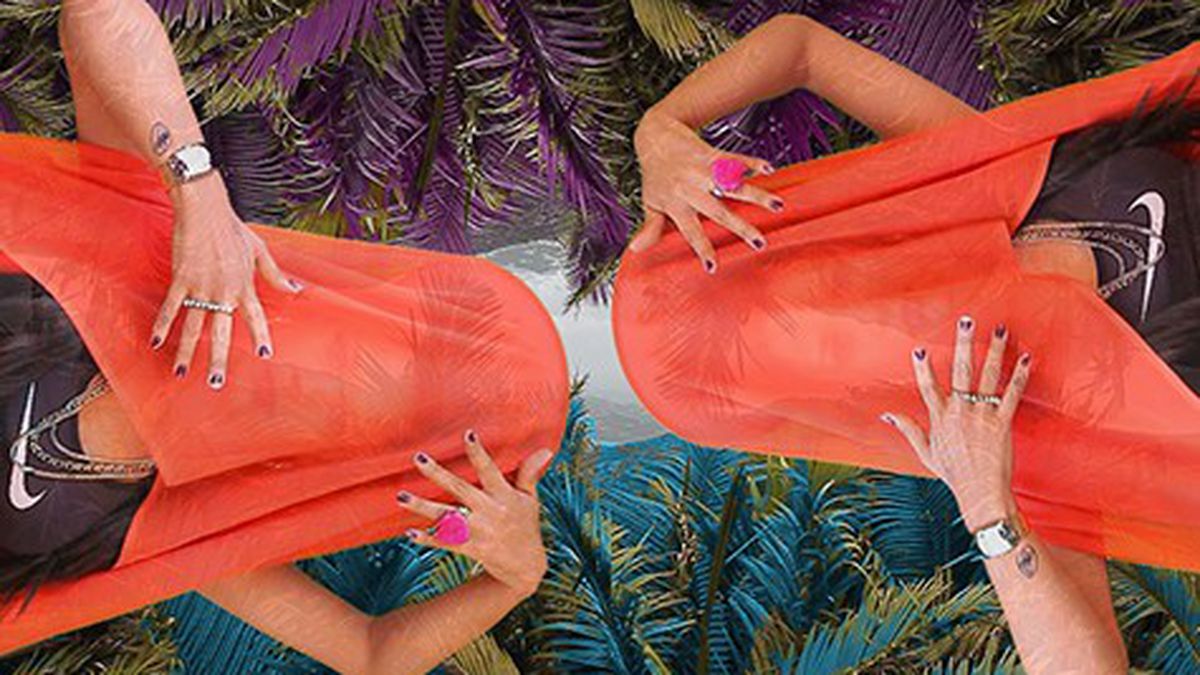 Artist Sofía Córdova’s vision of mankind’s decline is inspired in part by Philip K. Dick’s The Man in the High Castle. For his novel, the author imagined what the world might have been like as a result of a successful global fascist takeover in the 1960s. In this world, California is a puppet state of imperial Japan, and Nazis have colonized the moon.

Córdova’s futuristic vision isn’t so twisted, but it is dark. Her solo show, Every Night I Tell Myself I Am the Cosmos, now on display at Royal Nonesuch Gallery is characterized by a seapunk-meets-hip-hop aesthetic — with cut-and-paste images and video, and glitchy footage of port-city scenes. This future is set in the Caribbean, and the end of human existence is approaching.

The small gallery space makes for a noisy experience — but who could imagine the world ending as anything but chaotic? The main video, “Echoes of a Tumbling Throne (Odas Al Fin De Los Tiempos ) #1” literally echoes and mixes with the sounds from the pyramid of six TVs on the opposite end of the gallery. The physical journey between the two pieces is few in steps, but is visually dense.

Evidence of the previous society (our current one) hides in the large assemblage of magazine and newspaper cutouts, obscured by Córdova’s modifications with black paint. In some images, only faces are visible. In others, the only recognizable parts are the shell-like clothing of stock figures such as military marching lines. Thanks to Córdova’s heavy-handed use of opaque paint, the images edit out the majority of the advertising and pop culture ephemera, leaving disjointed forms stranded across dozens of sheets.

Modifying and critiquing past culture is an essential practice to Córdova’s portrayal of the future. Her past projects have also used “reverse appropriation” to translate pop songs into Spanish. Her version of Mariah Carey’s “Fantasy” (sampling Tom Tom Club’s “Genius of Love”), titled “Cuande Se Acabe el Tiempo/Fantasia,” is part of the soundtrack to the multichannel video work in the front window. The show addresses various high concepts, such as individual and collective identity politics, but engaging visuals ensure multiple levels of engagement for viewers.

On the adjacent wall, silkscreen prints titled “S I G L I O S” look like album covers and royal portraits. They are inspired by video game manuals and were created during Córdova’s recent fellowship at the Kala Institute. In “Echoes”, the artist and others featured on the fabric banners perform dubbed lyrics alongside spluttering, inverted footage of abstract bay scenes.

In the formation of the new lyrics for “Echoes,” Córdova further adapted Dick’s work. While writing High Castle, he used the I Ching to resolve some of the plot points. Cordova uses tarot cards to determine her new lyrics. In this sibylline manner, Córdova challenges viewers to define our future, and to do so with creativity, regardless of whether the moon will one day be conquered.