.Sausages and a View

Brotzeit Lokal is a nice place to kick back and enjoy a grilled wurst and a cold brew. 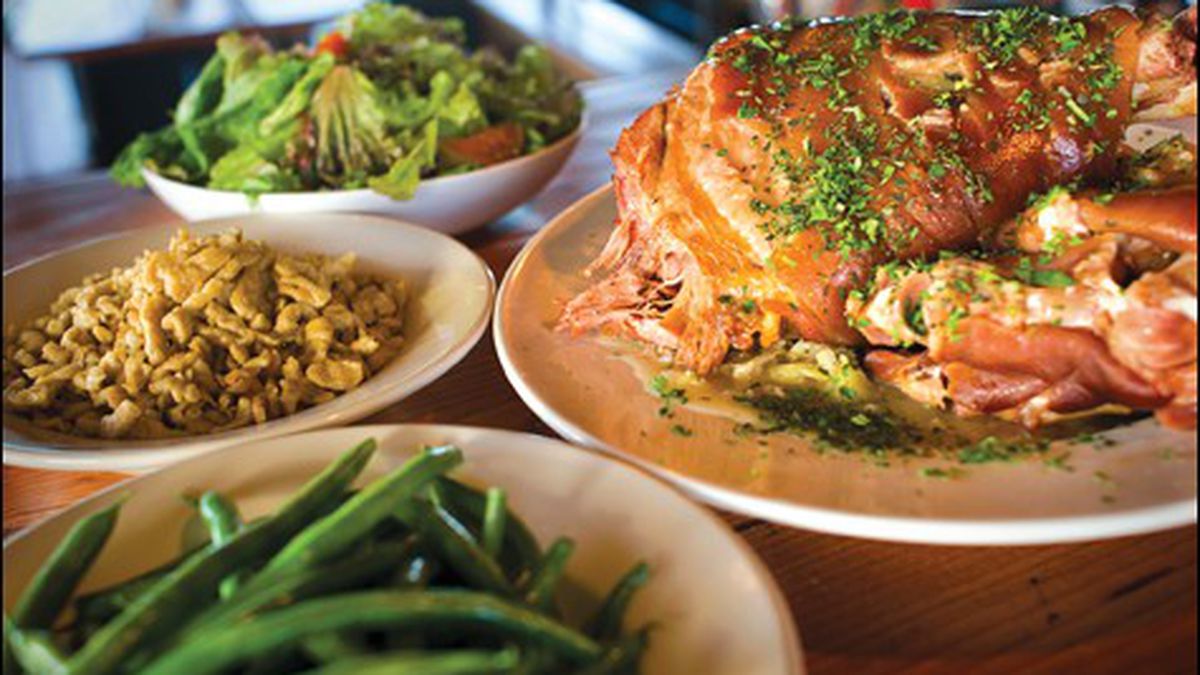 To get to Brotzeit Lokal, Oakland’s newest sausage-and-beer joint, you make a hard right at a small, blink-and-you’ll-miss-it sandwich-board sign, then snake your way through the Homewood Suites hotel complex’s narrow parking lot. Only when you reach the end of the lot — right on the edge of the Oakland Estuary — do you finally see one of the Bay Area’s most hidden-away waterfront restaurants.

Brotzeit is a rare find: a view restaurant without the usual trappings of a view restaurant. There are no fancy linens or wallet-busting prices. The furniture, whether you’re seated inside or out on the patio, consists of long benches and wooden picnic tables. And, considering that it’s located some distance away from anything that might remotely be called a tourist destination, the restaurant isn’t a place that many diners will stumble upon by accident.

What’s important, though, is that there isn’t a bad seat in the house (without a view of the water and all the pretty boats lined up along the marina) and the food — mostly traditional German beer hall fare — is much, much better than it needs to be. And so the restaurant has quickly become one of the city’s best spots to kick back with a beer and a simple plate of honest food.

For chef and co-owner Lev Delany, also the chef at Chop Bar, the main inspiration for Brotzeit Lokal was the two years he spent working in Germany, where the biergarten is ubiquitous. As Delany describes them, these were casual places, notable for the quality of the beer and food, but also for what the Germans call gemütlichkeit — a kind of warm, unhurried, friendly feeling.

True to the restaurant’s name (brotzeit means “snack”), much of the food menu, aside from the sausages, consists of small bites to munch on while you’re drinking: pickles and dips and various fried things. The fries, made with Kennebec potatoes, had a nice, fluffy texture, and the house-made pickles are great if you like your pickles extra-vinegary. My favorite bar snack was the obadzta, a kind of German cheese spread, which Delany makes by mixing together Brie, cream cheese, beer, and a traditional spice blend. The result is something like a cross between Cheez Whiz and a Greek taramasalata (a caviar-based dip) — tasty enough when eaten with bread, but absurdly delicious when used as a dip for French fries.

By far Brotzeit’s most popular menu items are the sausages, of which there are usually nine or ten to choose from. At first, several of these were sourced from local vendors, but Delany now makes nearly all of them in-house (with the exception of the hot dog and a couple of vegan options).

In general, the sausages ranged from good to very good — from the traditional German bratwurst (coarse and crumbly, but a bit dry) to a well-spiced jalapeño chicken sausage, which had a creamy, almost cheese-like richness. The best of the bunch was the bockwurst, a plump pork-and-chicken number whose filling had been ground to a fine paste (“emulsified” is the official term), resulting in a remarkably juicy sausage, moist and flavorful enough to enjoy on its own — no mustard or hot sauce required.

All of the sausages are available as sandwiches, served on a light, buttery Firebrand bun with a generous array of condiments: pickled onions, pickled jalapeños, and house-made sauerkraut (very fresh and crunchy). For a heartier meal, you can get a Brotzeit Platter, which comes with sliced bread, a larger variety of pickles, and obadzta.

The beverage of choice is, of course, beer, and Brotzeit has an impressive selection of about sixteen different kinds on tap, split between German beers and local American brews, with a couple of Belgians mixed in for good measure. All I’ll say about the list is this: The Alte Schule, custom brewed for the restaurant by Linden Street Brewery, is pretty much the perfect summer beer — clean, crisp, and, through some sorcery, still cold even an hour into my meal.

In the coming months, Delany intends to roll out more traditional German dishes, including several that he’ll be serving family-style. The only one available now is the Eisbein, and it is amazing: a whole, massive pork trotter that’s first brined, then braised until tender, and then smoked like a ham. It’s served on the bone, so you wind up with the sticky-chewy skin, the cartilage around the knuckle, the soft fat, and, of course, the tender flesh. The meat sits atop a pile of sauerkraut and a pool of the pork’s meaty juices, which mix together to form a delicious gravy.

The dish takes a half-hour for the kitchen to prepare, and it’s served alongside huge platters of green beans and spaetzle and salad. It was like Christmas dinner — in July … for $45 … with enough food to feed four hungry people. (Until a recent price hike, the Eisbein was only $35 — a ridiculous bargain.) If you order it for two, as we did, the leftovers will last you the rest of the week. You won’t be sorry.

Brotzeit self-identifies as a boathaus, but you might even feel like you’re dining onboard an actual boat. (The “boathouse” appellation isn’t just a gimmick either: You can rent a kayak at the Jack London waterfront, or bring your own sailing vessel, and paddle/sail/cruise down the estuary to one of the Brotzeit’s dedicated docking berths.) Although the outdoor patio is by far the most popular seating area, my favorite spot is the long, narrow enclosed promenade in back — glass windows stretching from end to end — where you and your drinking buddies can sit side by side, facing out toward the estuary just a few feet below.

Perched at one of these window seats on a sunny evening in late July, I had a hard time thinking of a more pleasant way to spend a couple of beer-soaked hours. A light breeze came in from off the marina, and, off in the distance, the members of a crew team enacted their smooth, syncopated glide across the water. The end of summer wasn’t far around the corner, but here, for a moment, it felt like it might stretch out forever.