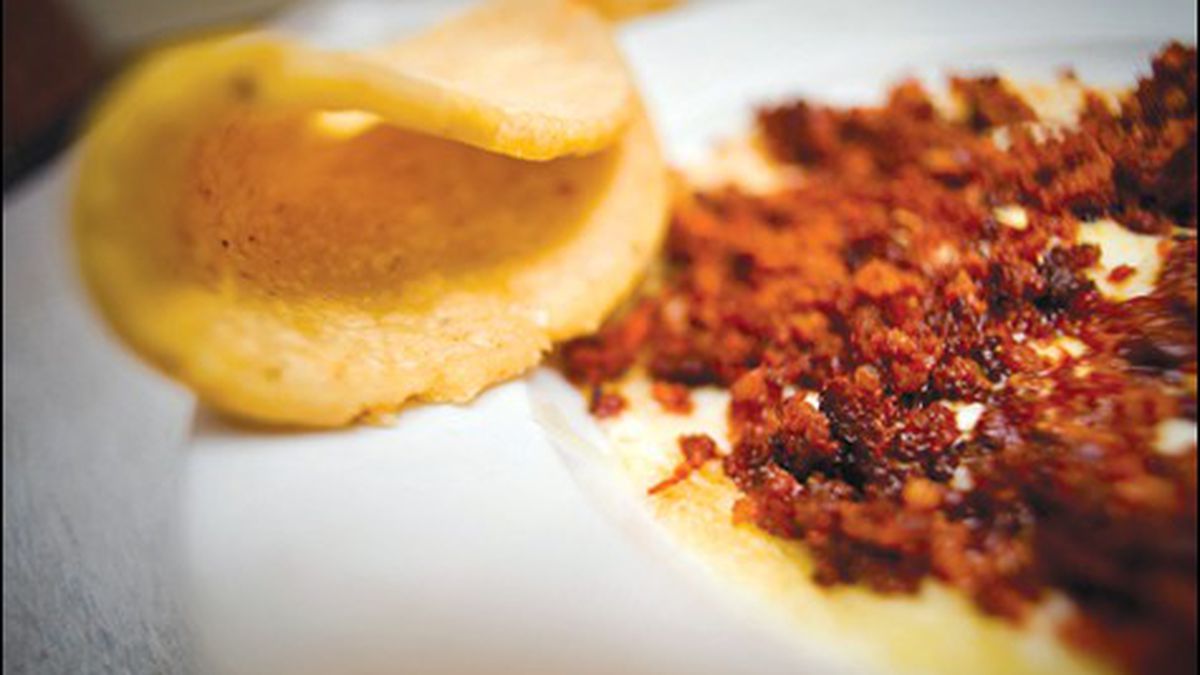 Santo Coyote Is the Wallflower of Fruitvale

The Jaliscan-style restaurant's stock-in-trade is its homey flavors and fresh meats.

So much is made of Fruitvale’s taco trucks, as well they should be. Even before Off the Grid and the food-truck craze, Anthony Bourdain’s No Reservations gave International Boulevard’s loncheras a nod. But there’s more to Mexican food on this street than super burritos, and for that, I like sitting down in the peeling vinyl booths at Santo Coyote.

Six year ago, the Jaliscan-style restaurant was called La Cenaduria de Ana Rosa. The ownership and the name changed, but the menu didn’t. I never got the chance to try the place in its old incarnation, but its current one is a crusty-on-the-outside, mellow-on-the-inside kind of place: the windows obscured by white iron bars, the faded sign sometimes says it’s closed even when it’s open. Next to the shiny-as-a-disco-ball El Taco Zamarano truck outside, it’s a wallflower.

But there’s an understated cheerfulness at Santo Coyote, especially on a Sunday afternoon, when the jukebox is chock-full of banda oompah-ing away and there’s a quiet steady stream of families. And then there’s the menu, which features all kinds of comforting things — that is, if comforting is a euphemism for meat and masa. The restaurant does both really well.

Sidestep the usual enchiladas and burritos (although they’re perfectly fine) and head straight for the stews, or anything accompanied by corn tortillas — they’re the ace-in-the-hole. At least a quarter-inch thick, almost gordita-esque, and made to order, the tortillas taste lightly of griddle and boldly of corn.

When they come to the table, they’re too hot to touch. They come apart steaming, in layers, the insides fluffy. They’re not fragile, and have wrinkles to them, as if they’d puffed and sagged while cooking.  And your hands will take on their sweet, slightly metallic smell after touching them.

The fish taco needed only one tortilla to pocket its tender, lightly battered pieces of tilapia with cabbage and salsa. It stretched easily to accommodate the weight of its filling.

Another good thing to eat with these tortillas: the queso fundido con chorizo, which is crisped bits of salty chorizo, its orange oil pooling on top of a bowl of melted cheese. Although the timing of the dish was off — by the time the tortillas were ready, the cheese had cooled a bit — the staff rewarmed it on request back to a hot, stretchy, highly indulgent bowl of salt and fat. The dish appealed to everything I crave, though I imagine the diet-conscious would be wary.

But the diet-conscious would be wary of half the menu. There are plenty of artery-clogging items, like the pupusas con chicarones and the camarones rellenos — bacon-wrapped shrimp stuffed with cheese. Even I feared those, and didn’t touch them.

The stews lay heavy on the tongue, rich with fat and bone marrow. The birria en su jugo, a goat stew spiked with lime and bright-red with chile, was rife with the taste of a good meat broth. The goat meat, which had first been grilled, then stewed, was generally soft, save for a bit of gristle and a tough cut here or there. It was no more gamey than lamb, and its brightness was comparable to the posole at Nopalito.

I also had the chicken mole, which was made with large shreds of white chicken breast. The stew had a good balance of chocolate and chile, and wasn’t pasty or astringent, like some moles.

That said, while it was flavorful and soothing, the mole won’t win over fans of the dish that like a little intensity. In fact, none of the dishes at Santo Coyote have the kind of spice that kicks you in the mouth, so heat-seekers would be better off looking to other restaurants for their fix. Instead, Santo Coyote’s stock-in-trade is homey flavors and fresh meats. So the tomato sauce that came with the pupusas was bland, and the cabbage dressing lacked the expected vinegary sharpness.

The huarache con nopales is a meal in itself; ditto the sope con pollo. The huarache could easily feed two  — the fried masa was crispy along the edges like a pizza; the sope was straightforward and nicely prepared. Both are filling and inexpensive, heaped with good-quality toppings and the usual triumvirate of salsa, lettuce, and sour cream, and I found little to criticize or praise in them, except their general freshness.

For dessert — not that my table needed it — fried plantains were served with a dollop of sour cream to cut the caramel sweetness.

The ambience of the restaurant suffers from the depressed economy of the neighborhood. On most evenings, the neighborhood is a ghost town, and so is the restaurant: the television blaring into the empty space, with only one or two tables being served. The small place perks up on weekend afternoons, though — every table is full, the television is muted, and the three-person staff scurries, serious and attentive.

The pace of service is luxuriously slow, but the free, freshly made chips and refried beans do much to mollify hungry folks. And when the food does come, it comes on huge platters. Leftovers are inescapable. Unfortunately, the tortillas, for whatever reason, don’t keep as well as I’d wish. It’s ephemeral, whatever it is that makes them good.

El Zamorano Taco truck’s specialty, a super burrito made with two tortillas, is as grandiose as the truck is shiny. But it’s worthwhile to rest your eyes on the hand-painted sign next door, and proceed beneath it to the delicately scented, steaming tortillas waiting for you.