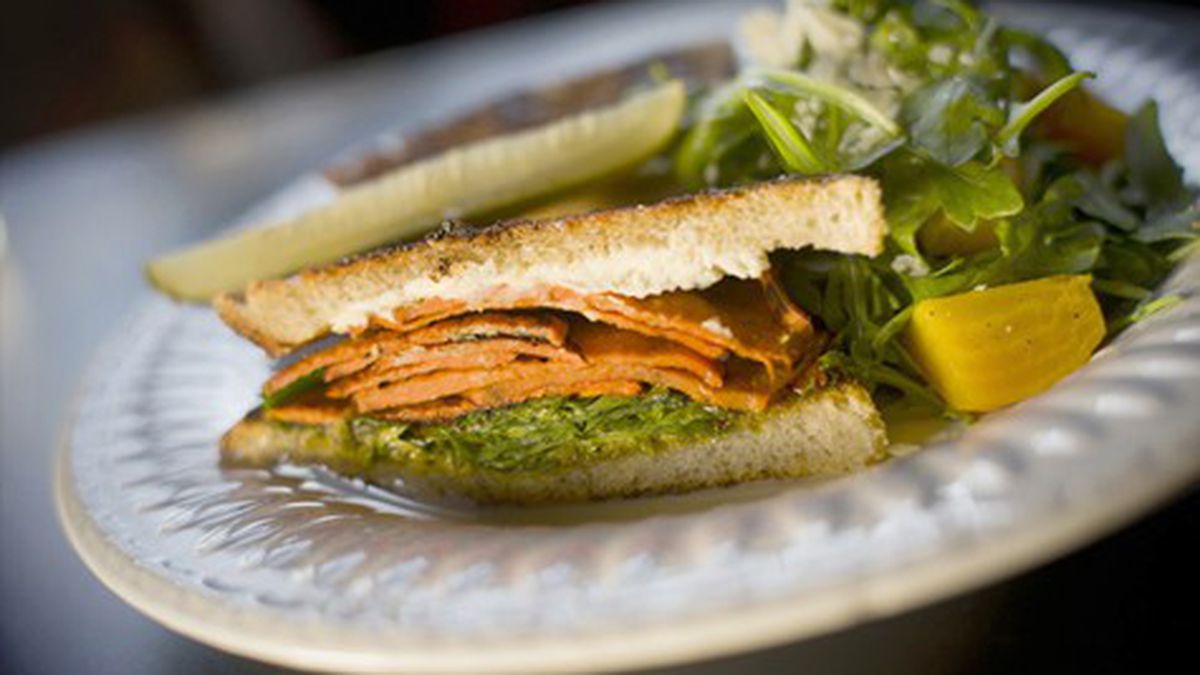 Sandwich in the Rough

On a recent weeknight, a young boy pushed open one of the heavy, engraved wooden doors that guard Vitus as though it were a feudal castle. Peeking inside, his eyes got that Disney-commercial gloss, with undertones of confusion, possibly fear. He let out a high-pitched little kid noise and ran back to his family, like a haunted house survivor.

Vitus has the design sense of a baroque mansion and the cubic footage of an airplane hangar, with the seedy undertones of an old Vegas strip club. Though it never brightens past low-level dim, the space boasts faux gaslights, kitschy neon signage, and dozens of blue glow-pods on the ceiling. As your eyes adjust, they take in floor-to-ceiling burgundy curtains, pinball and skeeball machines, scattered tables and chairs, Giger-esque mechanical sculptures, and the room’s focal point: a massive oil portrait of Duke Ellington above a modest stage. The space is immense and weird, and it hosts raucous live shows on most nights.

If this doesn’t sound like a primo dining destination, I get it. A full meal here feels as normal as a picnic on an oil tanker’s hull. But a chef with cachet is lurking in Vitus’ unlikely kitchen, one Jesse Branstetter. At this strange venue, Branstetter (formerly of Chop Bar and the short-lived 1015 Clay) is funneling all his classical training into a menu of lowbrow pub classics. Many chefs try their hand at sprucing up comfort food, but rarely does it work this well.

Start with the five-dollar munchies menu. At most music clubs, you’re lucky to find Ore-Ida crinkle cuts or microwaved jalapeño poppers for this price. Here, you can get Niman Ranch pork sliders: hand-shredded shoulder, slow-cooked in applewood bacon fat, served on a griddled Acme bun with orange-pickled jalapeno and thin-sliced avocado. It’s like a gourmet torta, in miniature. Or there’s the fatty, fennel-rubbed baby back ribs, shimmying off the bone with barely a glance from my direction. These are served boldly sauce-less with a side of tangy slaw, an appetizer fit for a (thrifty) king.

Also five bucks are the beef brisket sliders, served on a griddled Acme bun with horseradish salsa verde. Branstetter steeps the meat in ancho and garlic for 48 hours, stews it with red wine and whole oranges, then roasts it at a low temp for eight to ten hours. Little slices are shaved onto the bun, crisp around the edges with a fatty center, brightened by the kicky salsa.

Less memorable were the buttermilk-fried chicken slider, a classic lettuce-tomato-mayo affair, and the mild Tapatio wings served with a tzatziki-like dill ranch. But hey, did I mention the price?

The main dishes are all sandwiches, served on (you guessed it) Acme bread, with happy meats, local produce, and house-made condiments. Nothing tops $10, and nothing lets you down. Turkey meatballs are threaded with seared poblano peppers, slow-cooked in a spicy tomato sofrito, and served with queso fresco and a splash of oregano. Thinly sliced eggplant is breaded, lightly fried, topped with caramelized onions and sautéed cremini mushrooms, and served with melted Swiss and Dijon mayo on rye.

The grilled yam sandwich is slathered with goat cheese (my personal Kryptonite), but even I could recognize the pairing’s good sense: sweet and musky with a little arugula zip. Branstetter’s one vegan option is a French fry po-boy, complemented by a tangy tomato relish and roasted garlic gravy. You can un-veganize it with cheddar or blue cheese, but it doesn’t lack flavor without it.

In the kitchen, Branstetter agonizes over all the minutia. He sweats fennel and onions to prepare his veggie gravy. He zests lemons to add to the salsa verde (used on only one item). He blends his own mayo from scratch. In short, his detail-oriented menu is given the scrutiny usually found in the kitchens of high-end micro-manager chefs. My question: Why is this food served at Vitus?

Once your dinner leaves the kitchen, everything goes downhill. On a night with no bands, the Vitus seating area seems cavernous. On a concert night, it’s near-impossible to hone in on your food with the throbbing tunes, scenesters swarming your table, and myriad other sensory distractions. After an unceremonious table deposit by the stoic sous chef, you’re left to parse out your dishes in the dim club light (“No this is the burger, I’ve got your eggplant”).

Yes I know, dining isn’t the main draw to Vitus. The hierarchy is clear: Menus are hasty photocopies stacked at the end of the bar, made with a fraction of the care that goes into the colorful concert fliers. The kitchen is a secondary perk, something to complement a night of live music and carousing. Unless you see someone eating (an infrequent occurrence at most hours), you may not even know food is available.

I don’t know if there’s a way to fix this disconnect. Vitus is a fine place to see a live show, with decent acoustics, an approachable stage, and plenty of room to roam. But Branstetter is putting far too much care into his menu, using ingredients that are way too posh, to cook in a place where food plays third- or fourth-string.

There are plans to make dinner-friendly design tweaks, changing the seating configuration and adding a menu board. Branstetter envisions morphing Vitus into a neighborhood watering hole like Cato’s Ale House, where hip parents can chow with their kids before things get late-night rowdy. Honestly, this seems like a stretch. To achieve Cato’s brand of cozy, you need an intimacy not found in drafty, warehouse-style concert venues.

Vitus is what it is, and lucky is the music lover who stumbles onto the menu. Get it while it lasts.