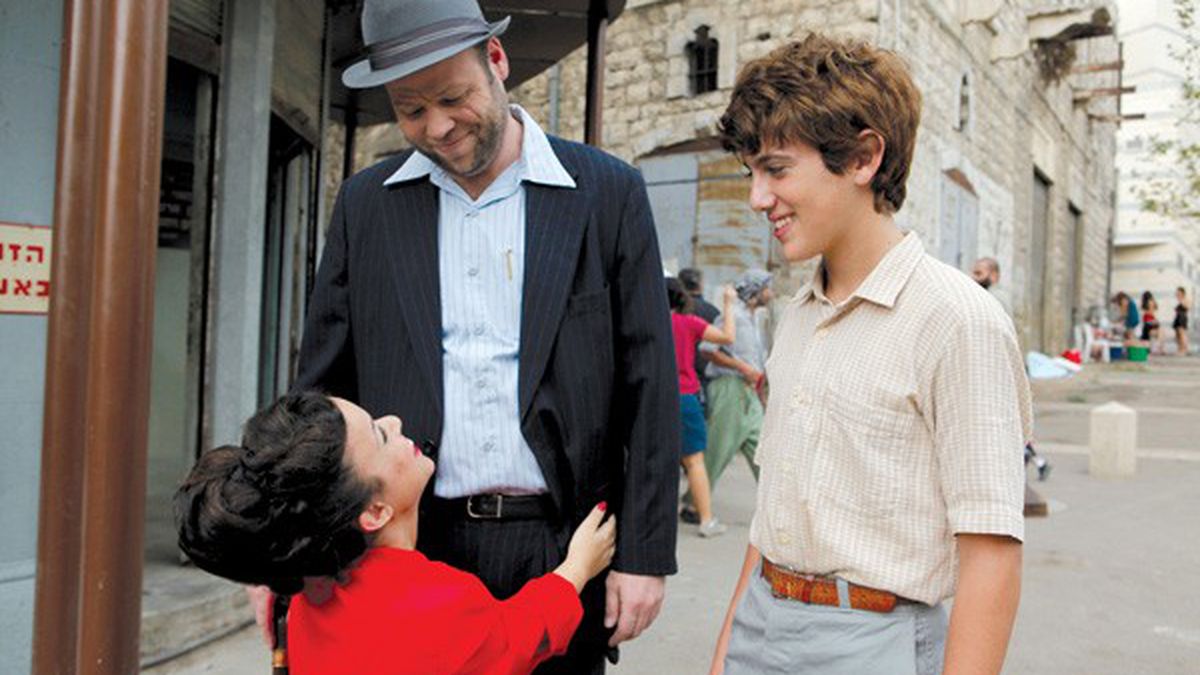 Where have all the Palestinians gone?

It was only natural that there should be a cooling-off period. After all, how much stress can an annual arts event stand?

Year after year, the San Francisco Jewish Film Festival challenged its audiences — and evidently tested the patience of some of its backers — with adventurous and frequently controversial programming. The perennial hot button was films about Israeli-Palestinian relations that seemed, in a few people’s eyes, to favor the hard-line Palestinian point of view.

Most observers felt that made the Jewish Film Festival a livelier, more interesting, less predictable place to be, a place that respected its audiences enough to assume they could tell the difference between filmed entertainment reflecting diverse political positions on one hand and scary anti-Israel propaganda on the other. In our view, the festival went out of its way to find the former, and if the latter crept in, well, that’s the price of an open society — even unpopular speech deserves to be heard in the search for truth. And besides, who better than the world’s oldest Jewish film festival to lead the way unafraid?

That was then, and this is now. A cultural firestorm erupted during the 2009 Jewish Film Festival (see our 2010 coverage), a few sponsors howled, and there was a mini-exodus of festival board members. Perhaps as a result, the 2010 fest seemed slightly subdued. That trend continues in the 31st edition. (Incidentally, this year’s festival is also the swan song for executive director Peter Stein.)

The 2011 version appears to be engaged in some serious soul searching, directing its gaze inward in an attempt to regain its bearings. In addition to an in-person tribute to leading man Kirk Douglas, a program of Jewish-themed cartoons, and a generous helping of Holocaust pics, the fest also branches out into drag queens (Mary Lou), skateboards (Skate of Mind), and a rare Israeli-made horror film, Rabies. By our count, of the 58 features and shorts there are only four that dare to touch the Arab-Israeli nerve — a far cry from years past.

Of those four, the best is Between Two Worlds, a provocative documentary by Alan Snitow and Deborah Kaufman (founding director of the festival, from 1980 to 1993) that asks: “Who is entitled to speak for the Jewish community?” Snitow and Kaufman were inspired by the contretemps over the film Rachel to examine the chilling effect of “neo-McCarthyism” in the Israel-Palestine discussion. They proceed from there in the sort of probing spirit that made the Jewish Film Festival famous, wisely refusing to jump to conclusions because the story is still being written. The film, together with a panel discussion including the filmmakers, plays the Berkeley Rep’s Roda Theatre (2015 Addison Street, Berkeley) on Wednesday, August 3.

For pure entertainment value, the Sunday, July 24, Castro Theatre (429 Castro Street, San Francisco) screening of Stanley Kubrick’s 1960 epic Spartacus, preceded by the presentation of the festival’s Freedom of Expression Award to Kirk Douglas in person, would be hard to top. All-time Jewish he-man Douglas, born Issur Danielovitch Demsky in Amsterdam, New York, deserves that award for Spartacus as well as his likewise socially conscious dramas Ace in the Hole (made by Billy Wilder) and Paths of Glory (another Kubrick).

But there’s another, even more directly relevant Douglas vehicle on tap: 1953’s rarely seen The Juggler, starring Douglas as a traumatized Holocaust survivor who immigrates to an Israeli kibbutz with bad memories in tow. Juggling magician Hans Muller, a favorite of kibbutznik kids, must first overcome his personal demons, and as he does so director Edward Dmytryk matches Douglas’ intensity with lyrical sensitivity. It screens Monday, August 1, at the Roda.

The vast majority of Poland’s Jews were wiped out by the Nazis in World War II, and during the Cold War that country’s communist government conducted anti-Semitic purges against the few survivors. And yet Polish citizens rescued large numbers of Jews from the Shoah. This paradox, taken together with a resurgence of interest in Jewish culture in contemporary Poland, forms the basis of the festival’s “Poland and the Jews” spotlight. Among the featured films are the documentary 100 Voices: A Journey Home, in which a group of American Hebrew cantors sings for cheering crowds on a tour to Poland (Thursday, August 4, at the Roda); and the sobering Polish-produced drama Joanna, about a goyishe woman (Urszula Grabowska), circa 1943, who hides a little Jewish girl (Sara Knothe) in her Warsaw apartment amid a crescendo of threatening incidents (August 3, Roda).

Compare and contrast the above with the true story of Shulamit “Shirley” Rabinowitz, the one-hundred-year-old cousin of rock singer Lou Reed. As discussed in loving close-ups in Reed’s nifty 28-minute short Red Shirley, she had the good sense in 1928 to move from a Polish shtetl to New York City, where she worked 47 years as a labor organizer in the garment industry. What a punim! Her story is part of “Jews in Shorts: Focus on Docs,” at the Roda, August 3.

Krusty the Clown suffers a crisis over his Jewish identity. Crazy Mel Gibson froths and barks. And if you want to learn to manage your money, you should become Jewish. Such are the revelations of “Jews in Toons,” a lighthearted, satirical evening of TV cartoon depictions of Jews and Jewishness, hosted by Mike Reiss, a writer for The Simpsons who also created the festival’s wacky 2011 trailer.

In “When You Wish Upon a Weinstein” from Family Guy, Peter sings “I Need a Jew” and visits Temple Beth Thupporting Actor in search of wisdom. Stan and Kenny of South Park chase down Gibson to demand a refund after failing to sit through The Passion of the Christ. And TV clown Krusty, aka Herschel Krustofsky, comes to the home of The Simpsons enmeshed in a net of perplexity. Observes Lisa: “Poor Krusty, he’s like a black velvet painting come to life.” Can you handle it? Find out on Monday, July 25, at the Castro.

When in doubt, Jewish film festivals around the world can always reach for the old standby, Holocaust movies. The clear standout is Gilles Paquet-Brenner’s Sarah’s Key, a drama that looks back in shame at French complicity in the WWII deportation of Jews and its lingering effects on a 21st-century woman played by Kristin Scott Thomas — it’s the opening-night film at the Roda on Saturday, July 30. Other worthwhile Holocaust entries are Elisabeth Scharang’s Austrian-produced In Another Lifetime (Tuesday, August 2, Roda); Britta Wauer’s intriguing doc In Heaven Underground: The Weissensee Jewish Cemetery (Saturday, August 6, Roda); and a pair of films on the 1960 capture, trial, and execution of Nazi “final solution” mastermind Adolf Eichmann: Eichmann’s End (August 1, Roda) and The Hangman (August 2, also at the Roda).

Don’t let the festival’s placid surface fool you. Hidden deep in the schedule is a film so utterly eerie, so subtly bizarre, that collectors of curiosities may wish to seek it out when it plays July 30 at the Roda. Phnom Penh Lullaby, a documentary by Polish director Pawel Kloc, follows the increasingly disturbing antics of a Israeli man named Ilan Schickman, who is shown in cinema-verité style interacting with his Cambodian girlfriend, Saran, and their daughters, two-year-old Marie and six-month-old Jasmine, in the squalid neighborhood of Cambodia’s capital where ex-pat Ilan ekes out a living reading tarot cards for locals and passing tourists. Prompted by the filmmakers but ostensibly unrehearsed, the doc’s subjects visibly sink into a degradation so complete it’s almost Dickensian.

Modern luftmensch Ilan appears to be an errant sex tourist who decided to go native, a weak dreamer overtaken by reality. His ex-prostitute “wife” Saran, a poverty-stricken drunk who’s unsure about the paternity of the two little girls, fields queries, with sickening eagerness, on the possibility of selling little Marie and Jasmine to human traffickers. The camera watches these people with cool dispassion, and yet their pathetic story is sprinkled with enigmatic, lyrical moments. Is Phnom Penh Lullaby a metaphorical excursion to the dark side of the free-market construction of reality, or a melancholy postcard from night town? Find out for yourself at the Roda, or at the Castro screening on Wednesday, July 27. You’ll never see this film at a commercial art house. For complete festival info, visit SFJFF.org.

Put Your Feet Up