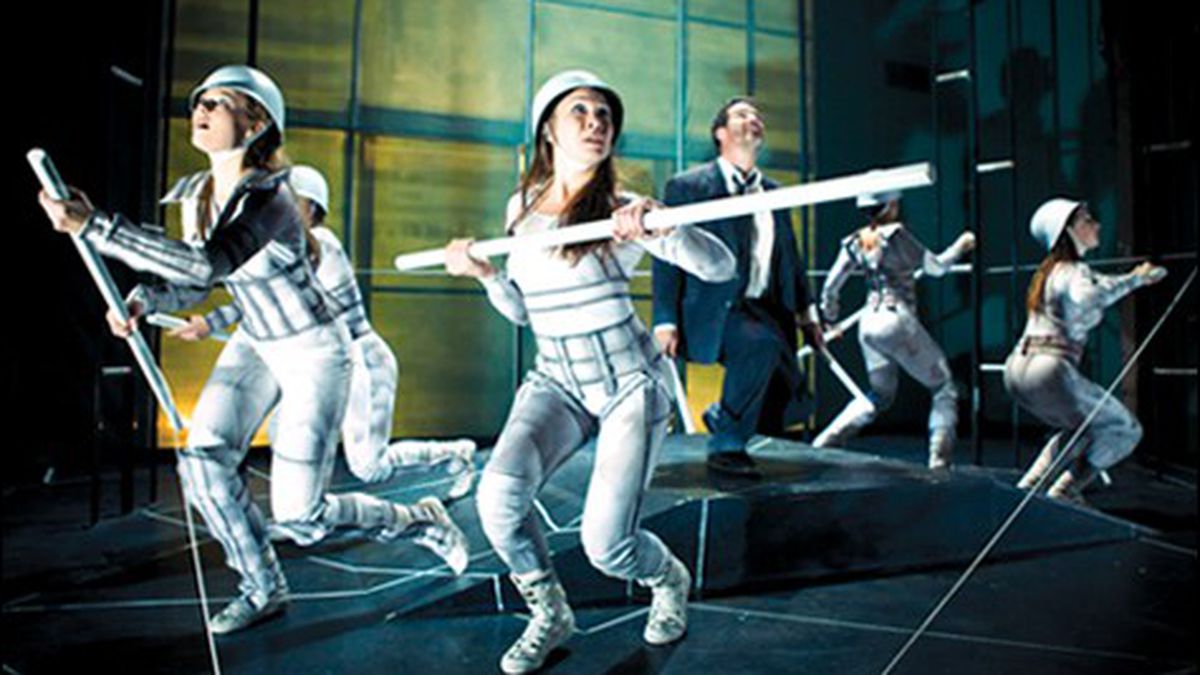 Salt That’s Not of the Earth

To walk into The Ashby Stage this month is to enter a green room, which could either be a place somewhere in the 565 nautical miles between Ithaca and the Island of Calypso, or a space inside the mind of Odysseus (Dan Bruno), our harried protagonist. It’s just one of many things that go unexplained in Of the Earth, Jon Tracy‘s latest Odyssey redux, and the sequel to his previous Salt Play, In the Wound (also produced by Shotgun Players). Folks who know the director’s work will have a vague idea of what to expect — or not. After all, when Tracy rips into a canonical text there’s no telling what he’ll keep and what he’ll throw away. To him, even the most entrenched source material seems imminently mutable. His Odyssey is visually stunning, and at the same time frustratingly abstruse.

Perhaps the most glaring bit of poetic license is Tracy’s emphasis on character psychology. The Greeks had a fairly monochrome emotional palette. Characters could be proud or have hubris; they could mourn their dead or fall in love; they could get aggressive and act on it by raping or sacking or pillaging. Overall, though, they didn’t spend a lot of time psychoanalyzing their ambitions. Not to mention that if a person’s actions defied logic, he could always attribute them to divine providence. If any society thought free will was overrated, it was ancient Greece.

Tracy, on the other hand, loves to explore character motivations. He’s deeply interested in guilt and atonement. His Odysseus is a vexed, frightened character perpetually haunted by ghosts from the past. Their apparitions flash across a video screen in the background: Iphigenia, who was sacrificed by her father; Achilles, who was killed by Hector; Agamemnon, who was murdered by his wife’s lover. Tracy also tries to craft inner lives for the mythical creatures the Odysseus encounters on his journey. The Cyclops, a one-eyed giant with a meandering train of thought, regrets that he must eat everything in sight. Zeus (Rami Margron) is a sass machine, trying to hold court with a four-woman entourage. Poseidon (Anna Ishida) is always angry, and always speaking on a crescendo.

There are obvious resonances between the Trojan War and our current occupation of the Middle East, and no theater director can resist highlighting them. That said, Tracy is more creative than most. In last year’s See How We Are, he rendered violence as an aesthetic motif, allowing characters to machine-gun each other and spatter blood all over a bleached white backdrop. Of the Earth includes several Trojan War montages, shown without audio on the video screen. The characters wear matching paramilitary gear and pound taiko drums in the background. Odysseus’ son Telemachus (Daniel Petzold) is constantly watching prime-time battle footage on the boob tube. His whole perception of the war, and of the people involved, is framed by television. In a series of monologues, he tells us what he’s seen. Agamemnon’s death caused an OJ-style news blitz, he said, probably because of the king’s larger-than-life persona. (Ag was known for hosting tuxedo gala events.) Telemachus says he watched raptly as news shows broadcast the burning and sacking of Troy — over and over again.

With his blithe television recaps and folksy Midwestern accent, Telemachus is easily the most likeable character on set. He also seems just naive enough to communicate with his father via paper airplane. His mother Penelope (Lexie Papedo) is more of a specter than an actual person, wandering about the stage with a ball of string, weaving strange geometric patterns. The others are architects of war or thwarters of Odysseus, who enacts his own frustrations by running in place. There’s an extremely strange video sequence in which a man is forced to shoot intravenous drugs — specifically, whatever narcotic derives from a lotus flower. I’m still not sure how it connects to the Trojan War.

But that’s par for the course in a Jon Tracy play. He’s a director who traffics in suggestion. His five-woman Greek chorus is meant to produce cognitive dissonance, with its mix of androgynous deities and seductive man-eaters, all clad in flesh-clinging spandex. His narrative arc is murky, too, since it’s not clear whether Odysseus is trying to get home, or atone for the sacrifice of Iphigenia (an event that gets short-shrift in the real Odyssey, but became a huge fixation for Tracy). Best of all, the sets and props — designed by Nina Ball and technical director Anne Kendall — often require a couple leaps of imagination. Five women dangle a light bulb to become a Cyclops. TV static on the wall symbolizes modern information technology. Drumsticks double as oars and weapons, while set pieces serve as drums. The video screen becomes an extension of the stage. Actors arrange themselves in interesting pentagonal shapes, so that every scene is a tableau. And then there’s the green room. Its significance becomes less and less clear as the story moves forward.