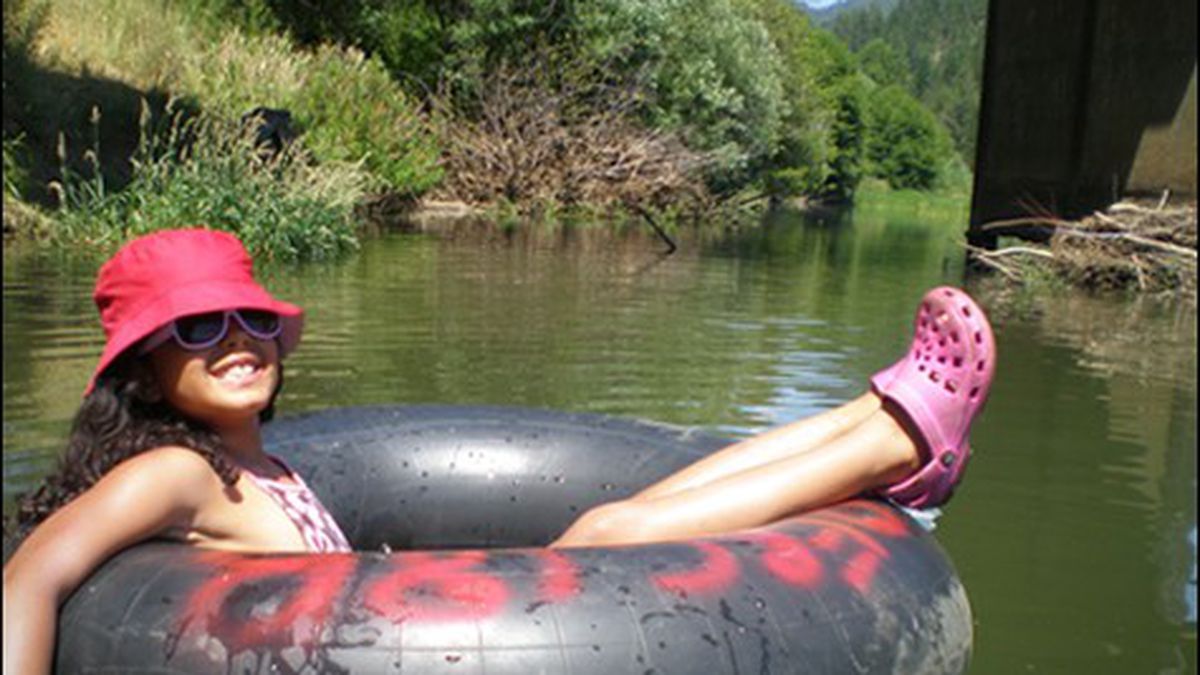 Outdoor Afro pushes back on the assumption that green is just for whites.

The tagline below the Outdoor Afro logo, which features a campfire, a row of pine trees, and a stylish African-American woman in sunglasses, says “Where black people & nature meet.” It’s eye-catching, and Rue Mapp displays it prominently at her booth to attract passersby.

She reeled one in on a recent Saturday morning at the Phat Beets Produce farmers’ market in North Oakland. A middle-aged shopper named Carol approached hesitantly and initiated a little banter. Mapp responded with a flurry of questions, suggestions, and affirmations, all with one basic aim — to give Carol reason to get out more.

This is Outdoor Afro in action, encouraging African Americans to take advantage of the East Bay’s wealth of parks and open space. The proposition pushes back against the assumption that to be down with anything green, you have to be white.

Carol, for example, romped around Golden Gate Park back when she was growing up in San Francisco. She lamented no longer venturing out for experiences like that, and as a fresh transplant to this side of the bay, confessed not knowing where to find them here anyway. Mapp recommended Redwood Regional Park and handed over an activity guide from the East Bay Regional Park District.

“That’s typical,” noted Mapp as Carol strolled away. “People are like, ‘Well I used to, when I was a kid.’ And so that’s why I use the term reconnect African Americans with the outdoors — because I’m not introducing anybody to anything that’s new.”

Instead, she’s had them dust the cobwebs off their bicycles for a group ride with Richmond Spokes along area waterways, or invited them for a closer look at local birds along the shoreline in an expedition with the Golden Gate Audubon Society. Absorbing small, familiar doses of nature like this can be profoundly transformative, according to Mapp, because people gain greater appreciation of their surroundings and can tap into a spiritual kind of rejuvenation. They also end up relating to each other on a wavelength beyond the digital range. Of course there are health benefits as well, but Mapp prefers to downplay the exercise angle, pointing out that “once you think it’s work, it’s not fun anymore.”

And having fun, after all, lies at the heart of Outdoor Afro. Mapp emphasizes this because sometimes she must overcome the aversion and flat-out fear of those who see “inconvenience, discomfort, and trauma” as nature’s primary offerings. “We have to be sensitive to the fact that — especially with people of color — outdoors can represent work, it can represent danger, it can represent a lack of progress,” she said.

Revisiting the origins of such sentiments in Rooted in the Earth: Reclaiming the African American Environmental Heritage, professor Dianne D. Glave traces the complicated relationship black people in this country have had with nature. In the slim, scholarly volume published August 1, she examines how figures like Frederick Douglass, W.E.B. DuBois, Booker T. Washington, and Zora Neale Hurston addressed the issue, unpacking a legacy of past generations that informs the modern African-American perspective. Writing that in the era of slavery, “wilderness could be a haven or a nightmare for blacks,” Glave goes on to imply the same might be said for today.

Quoted in the book herself, Mapp says her personal history has been nearly all haven and no nightmare. Although a product of Oakland public schools, she got a taste of rural life as a child because her parents owned a ranch in Lake County, some hundred or so miles to the north. Up there, she fed the family pigs, watched tadpoles in the nearby creek transform into frogs, witnessed snow falling, and marveled at the brightness of the stars in the night sky. Given these wonders, she said, “it wasn’t like I even had any option but to powerfully engage with the outdoors” — especially since the ranch lacked a phone.

Telecommunications no longer take a backseat in Mapp’s appreciation of the environment, however, because so much of that currently revolves around her web site, OutdoorAfro.com. While she relishes the face-to-face interaction she gets from tabling at events or organizing her own excursions, as a 38-year-old single mother of three, she only has so much time, and having an online presence extends her reach. The site has been live for almost a year and a half, piling up 10,000 visitors a month and earning the approval of 1,700-plus Facebook users.

Virtual numbers aside, though, Mapp still measures the success of her advocacy by what she can observe on trails and at campgrounds. Her ultimate goal? “I go out, and I see people who look like me, and it’s no big deal.” And that goes not only for hikers and campers, but for the nonprofits and corporations who cater to them. To be fully inclusive, any institutionally sponsored, eco-oriented movement — be it recreational, political, or both — needs to demonstrate cultural relevance and authenticity. “I want to see organizations do a much better job of integrating their local community into the work that they do,” Mapp said.