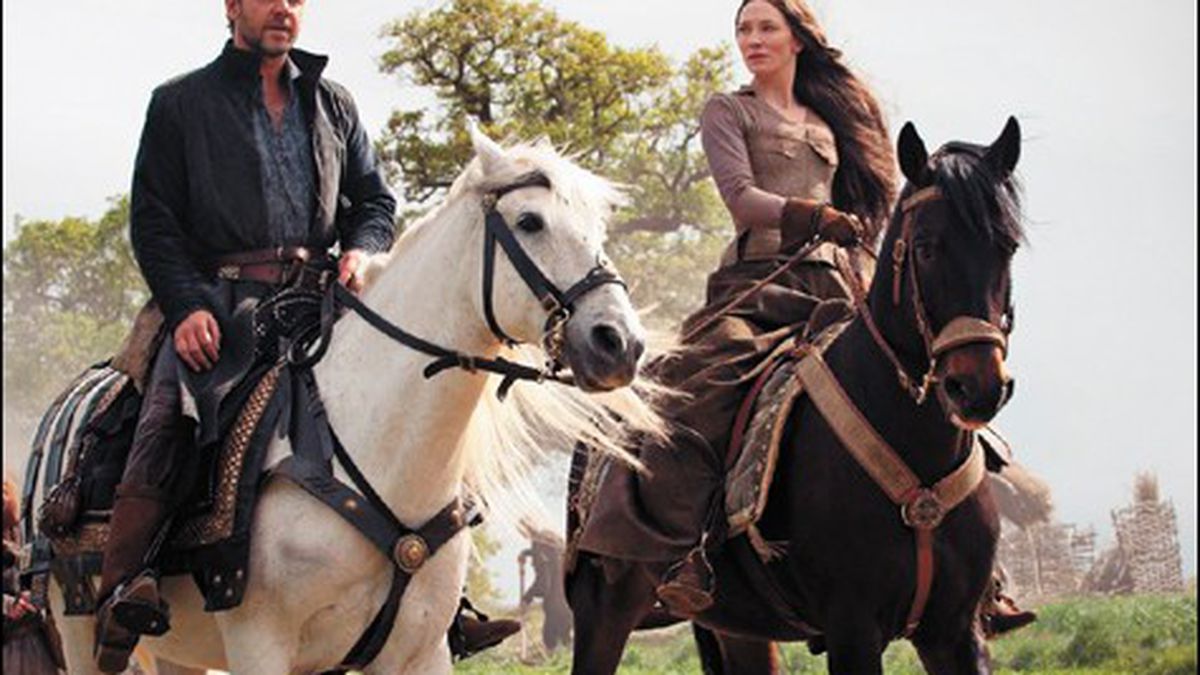 Marauders and beekeepers in Ridley Scott and Russell Crowe's remake, plus in Merchant Ivory's The City of Your Final Destination.

Everything you thought you knew about Robin Hood was wrong. In Ridley Scott and Russell Crowe‘s humorless, by-the-numbers prequel to the durable legend of medieval England, no one swings through the trees of Sherwood Forest. There’s no archery tournament. The Merry Men aren’t merry; in fact, they’re not men but a band of feral children known as the Orphan Boys. Little John (Kevin Durand) is a surly lout, and Friar Tuck (Mark Addy) keeps bees. Perhaps most distressing of all, Robin Hood has traded in his tights for black leather jeans.

Not only does Crowe’s title character come across as more of a broadsword-swinging general than a bow-hunting guerrilla, but his two best-known names, Robin Hood and Robin of Loxley, are revealed to be pseudonyms. Returning crusader Robin Longstride acquires the new title by impersonating the real Loxley after the latter is killed en route to England. He maintains the deception just long enough to get next to Loxley’s widow, the headstrong Maid Marion (Cate Blanchett), through the good graces of her father-in-law, Sir Walter (Max Von Sydow), in troubled Nottingham.

Things get even murkier on the political front. Robin goes undercover in order to deliver the crown of England to Prince John (Oscar Isaac), brother of King Richard the Lionheart (Danny Huston), who meets his end fighting Frenchmen on his way home from fighting Arabs in the Holy Land, circa 1199 CE.

An unscrupulous English usurper named Godfrey (heavy Mark Strong) conspires with the opportunistic King Philip of France (Jonathan Zaccai) to steal the crown and assume the throne, but Robin thwarts him. This only spurs Godfrey to join forces with Philip’s men on a commando raid into England. Much “Norman dog! Saxon pig!” strife ensues, with Crowe going into full Gladiator mode against the foul and most foreign French.

No one can blame Scott for tinkering with the story. After surviving the attentions of everyone from Richard Lester to the Monty Pythons to Mel Brooks, Robin Hood was due to be put into more or less realistic terms with the authentic stink of the Middle Ages. But not with Crowe. And not with a screenplay by Brian Helgeland, who adapted the story he wrote with Ethan Reiff and Cyrus Voris.

Crowe is too grim for the job. Robin Hood should be witty and impudent, not a plodding romper-stomper. He looks especially awkward in his halting love scenes with Blanchett, whose stressed-out Marion is otherwise of a piece with the rest of her English historical impersonations.

Ridley Scott is not a brainless filmmaker. For someone so relentlessly commercial, he has made his share of coherently written, thought-provoking adventures. But Robin Hood is not one of them. It might be time for him to rethink his relationship with the dependable but rather limited Crowe, whose skull bashing and dull introspection make Nottingham a gloomier place than it already was.

Riding high behind Blanchett in Scott’s enormous cast: Von Sydow as the blind but belligerent Sir Walter, still engaging in swordplay fifty years after The Virgin Spring. Eileen Atkins as Eleanor of Aquitaine, the stage-managing Queen Mother. William Hurt‘s William Marshall, odd man out in the dizzying double-crosses behind the Plantagenet throne. Addy’s rough-and-tumble Friar Tuck should have had more screen time.

Ditto Isaac as King John. In Michael Curtiz and William Keighley‘s 1938 The Adventures of Robin Hood, the villainous John was played by Claude Rains as an effete martinet. Scott and Isaac imagine him as a green, pleasure-loving, causally cruel young playboy with a new French bride who nonetheless races impetuously into battle against invaders when his country calls — sort of a cousin to Joaquin Phoenix’s Emperor Commodus in Gladiator. As usual, the peasants pay the price for the ambitions of people like King John and King Philip. This Robin Hood’s fatal flaw is that he doesn’t know which side he’s on. Proles or masters? Tell it to the kid with the mask, the one who steals the corn.

As the first Merchant Ivory production since producer Ismail Merchant‘s death in 2005, The City of Your Final Destination lines up with the likes of The Bostonians or Hullabaloo Over George and Bonnie’s Pictures on the less ostentatious, character-driven-comedy-of-manners side of the MI ledger.

In the classical sense of “comedy of manners,” the 2009 production isn’t punch-line funny, but there’s definitely a cosmic giggle in the story of a shy young literature scholar from New York named Omar Razaghi (UC Berkeley alumnus Omar Metwally), who travels to the pampas of Uruguay to convince the aggressively eccentric family of a recently deceased author to participate in Omar’s biography of the man.

In the best tradition of this kind of film, nothing really happens except that the characters’ whole world shifts under their feet. The author’s widow, Caroline Gund (Laura Linney), is the sort of controlling matriarch more motivated by old-school snobbism than by any protective instinct toward the family. Caroline shares a roof with her late husband’s mistress, Arden Langdon (a radiant Charlotte Gainsbourg), and her young daughter by the old man. The main activity on the vast estancia of Ocho Rios, besides raising cattle, is arts ‘n’ crafts, listening to classical music, and heavy drinking.

In another house on the estate live the late Jules Gund’s surviving brother, Adam (Anthony Hopkins), and his longtime partner, Pete (Hiroyuki Sanada). Like his brother, Adam balances his outsider’s status as a German Jewish refugee from Hitler with a sort of “floating world” philosophy. Pete helps out on the ranch but has enterprising aspirations. As it stands on Omar’s unannounced arrival on their doorstep, Caroline is against the proposed biography, Adam is for it, and Arden is undecided.

Time takes its course. Omar’s autocratic girlfriend Deirdre (Alexandra Maria Lara) arrives to expedite the project. Ivory and longtime screenwriting collaborator Ruth Prawer Jhabvala, adapting Peter Cameron‘s novel, forces us to take our time and get to know the characters down to their socks. The result is a wistfully charming film that’s true to the Merchant Ivory legacy, but with the type of subtlety demanded by its rootless, sophisticated subjects, who buzz around in circles like the inhabitants of Pete’s bee colony, making honey.