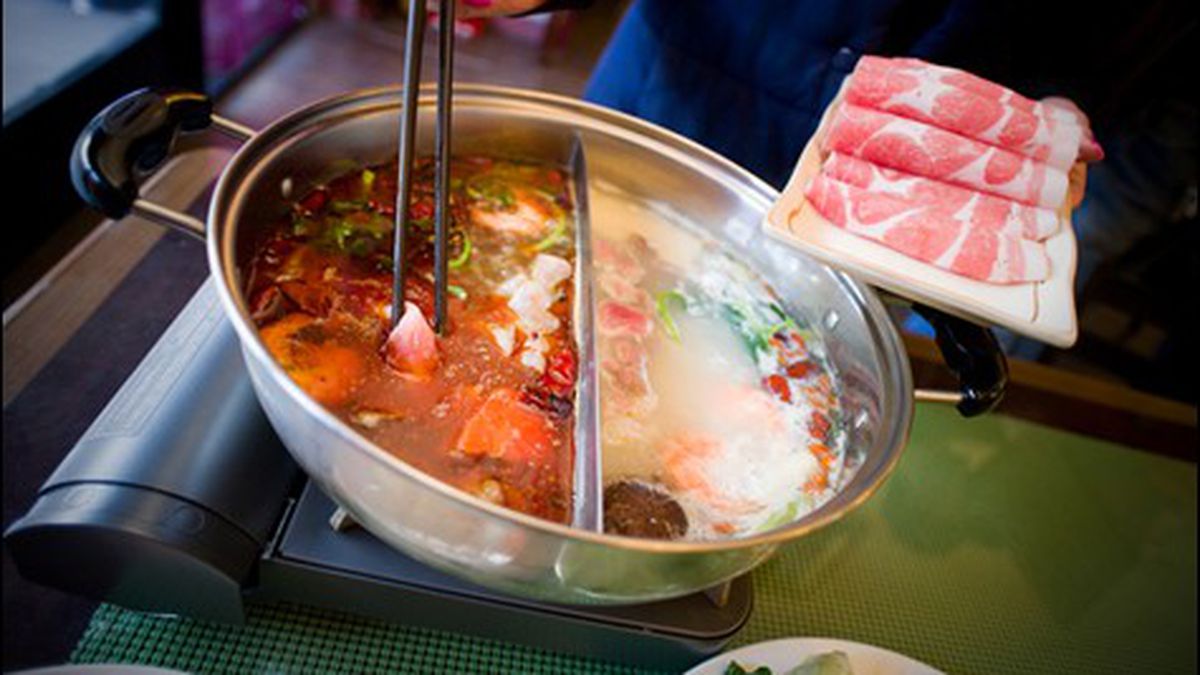 Ring in the Lunar New Year with a Hot Pot

I’ve read that the reason Chinese people eat hot pot during Lunar New Year is because the dish symbolizes prosperity. God knows, every little bit counts in this economy, but for me hot pot has always been the cuisine of the everyday: of spur-of-the-moment trips to the Asian supermarket and dinner parties hosted by tentative (or thrifty) home cooks — the simple pleasures of hot soup, dueling chopsticks, and boisterous conversation.

Here in the East Bay, I’ve rarely sought out hot pot, since so many of the restaurants skew toward Cantonese fare, which isn’t known for hot pot in the same way that Taiwan or the northern and central Chinese provinces are. But a couple of recent discoveries in Oakland’s Chinatown — just in time for the New Year — reminded me how great this cook-as-you-go style of eating can be, especially on a chilly night.

For the uninitiated, a decent introduction to hot pot can be found at Cafe 88, a Hong Kong-style cafe tucked inside the Pacific Renaissance Plaza — one of my favorite cheap lunch spots, where $5.50 will buy you a rice plate piled high with some of the most tender and meaty roast duck you’ll find in Chinatown.

But we’re here to talk hot pot, and a well-kept secret is that Cafe 88 has an individual-portion hot pot on the menu, available during dinner only. For $13, you get a choice of soup base — regular, spicy, or satay/shacha — and a generous portion of raw meat and seafood (thinly sliced beef, chicken, and fish; head-on shrimp; a single oyster), plus tofu, rice noodles, wontons, and frozen beef balls. It’s a lot of food.

Once your little sterno-burner-powered pot of soup comes to a boil, use the wire ladle that’s provided to dip each piece of meat in — maybe thirty seconds for the beef, a little longer for the chicken and seafood. The stuff that won’t suffer much from overcooking (the beef balls, the tofu) you can toss in all at once.

If you opt for the “regular” broth, as we did, the finished product won’t have much flavor, so you dunk each bite in shacha sauce, aka Chinese barbecue sauce: a savory-spicy blend of soybean oil, brill fish, and garlic. (True connoisseurs thicken their shacha with a raw egg, but that’s not a practice I feel comfortable recommending if you don’t know the provenance of said egg.)

In any case, I find the vegetables, not the meats, are the hallmark of great hot pot, and it’s here that Cafe 88’s version disappoints: nothing but iceberg lettuce. Anyway, this isn’t hot pot that will blow your mind — but it’s a way to hedge your bets if you aren’t sure if you’ll like hot pot, or if you don’t want to make it the focal point of your meal.

Serious hot pot eaters should head over to Hot Pot House, a new restaurant opened by the owners of Spices 3 across the street. Like Cafe 88, Hot Pot House has that elusive single-portion hot pot option, but also offers a more traditional communal hot pot dining experience — and a nicer, more spacious dining area to boot. A standard-size pot will serve anywhere from two to four people (more if you order a few add-ons).

What’s daunting, for the novice, is the sheer number of choices. Start with six different soup bases — everything from the plain “house flavor” (a rich broth made from pork bones and chicken carcasses) to the fiery and aromatic Szechuan mala (“numbingly spicy”) flavor to several versions that feature Chinese medicinal herbs (including the intriguingly named “specimen” flavor). We opted for the “red and white,” which allowed us to sample both of the first two options, each in its own compartment, for a yin-yang effect.

You also need to decide what you want to cook, and for that, the menu offers a whopping sixty-plus choices. A couple recommendations: Foochow fish balls, stuffed with minced pork, are delicious — and, to my knowledge, aren’t available anywhere else in Oakland. And while “frozen tofu” sounds like an awful thing, when boiled it’s wonderful — super-spongy and absorbent, perfect for soaking up the flavor of the broth and the dipping sauces. (In addition to shacha, make sure you ask for the excellent house-made dipping sauce: a slightly pungent blend of shacha, hoisin, and fermented bean curd.)

Anyway, the easiest (and most budget-conscious) option is to pick from about a dozen pre-set combos, and then supplement with a couple of extra items. The beef or seafood hot pots are a safe bet; the “lucky” hot pot — which includes tripe, pork intestine, and cakes of pig’s blood — will appeal to the adventurous. Our pick, the “village style” hot pot, came with thick pieces of pork skin, fish balls, enoki mushrooms, shrimp, and the aforementioned frozen tofu. All of the combos also come with a platter of assorted vegetables that, by itself, knocks Cafe 388’s veggie selection out of the park.

Aside from hot pot, the must-order dish is an appetizer of wontons in red oil. These aren’t as spicy as the intimidating pool of red chili oil suggests, but the sauce is spiked, deliciously, with a heavy dose of the unique numbing heat of Szechuan peppercorns.

Ultimately, the reason the hot pot at Hot Pot House is better than what you can easily replicate at home is because of the insanely tasty house broth, which you can sip as you go along or savor at the very end (with rice vermicelli if you’ve ordered it). That’s the genius of hot pot, really: In the process of eating your meal, you slowly create this pot of soup that tastes better and better as the night wears on, as it takes on the sweetness of the carrots and napa cabbage, and the fattiness of the meats.

Chances are you’ll have plenty of soup left over — the staff is generous about topping off your pot. You’ll thank yourself for that favor the next day.;

Schaaf’s Stance on Raiders Is Spot On