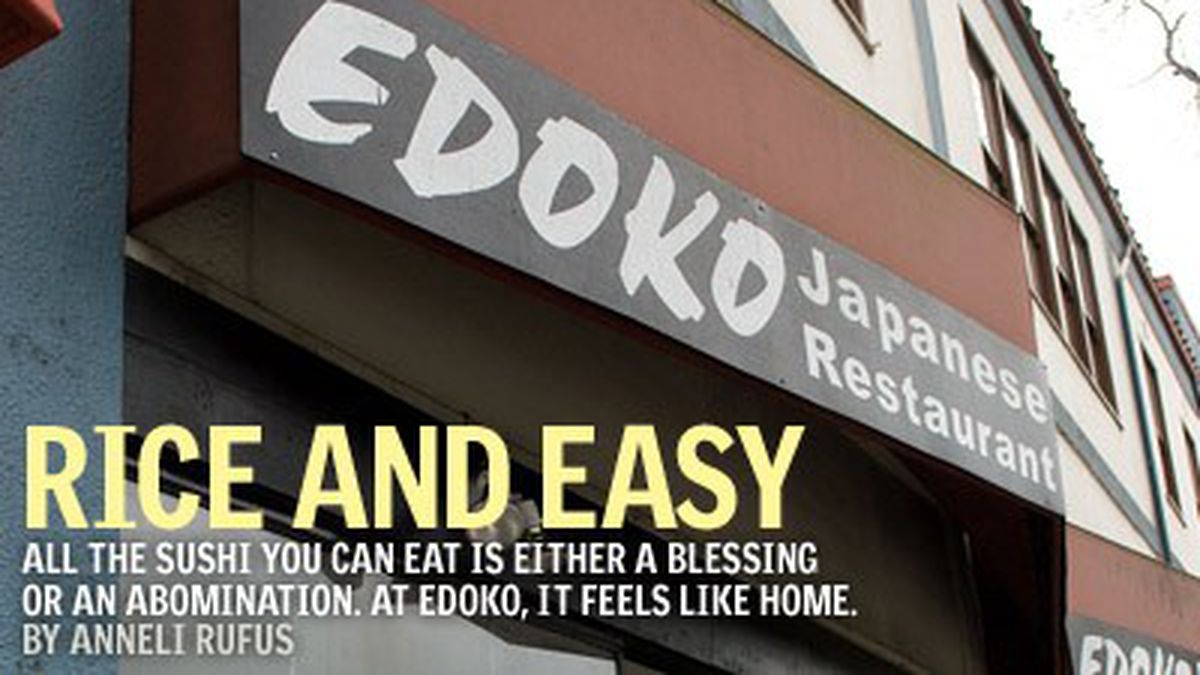 All the sushi you can eat is either a blessing or an abomination. At Edoko, it feels like home.

Two little words, which some would call an oxymoron: sushi and buffet.

It’s another of those great dividers, another virtual separation wall that splits humankind into either/or in these already divisive times. It’s right up there with liking/hating coconut, or being for/against the gas chamber. And this divider digs class-deep: You either believe sushi buffets are a fantastic bargain — calculating sums in your head as you rack up all the costly salmon, prawns, eel, flying-fish roe, and exotic seaweed you can eat for under twenty bucks — or else you balk at the very idea of sushi fashioned not for you especially, not sliced-stuffed-rolled at your whim and command, but for a crowd, and in advance, even a little in advance.

And if you’re in that first group, content to wait your turn for the tongs in that jostling crowd plucking its maki and nigiri and inari from a fleet of platters (some of them shaped cleverly like boats), Edoko is your home away from home.

And hominess is the whole point. Regulars — who comprise most of the clientele here, as the middle of Berkeley’s University Avenue sees little walk-through traffic, especially at night — relax at humble tables set widely enough apart for family rumpuses, lone reads, intimate chats. This generosity of space, scuffed lino floor aside, reminds you with a jolt how rare this is in the high-rent Bay Area, where sixty bucks typically buys an hour or two of bumping backs and entangling purse-straps with strangers while pretending that you do not mind. To Edoko’s wood-paneled walls, husband-and-wife owners James Lin and Jenny Szeto have attached a colorful hodgepodge that evokes your fun-loving uncle’s beach bungalow: Japanese prints, kimonos, fans, Daruma figurines, rice-paper screens with whimsical seashell designs, noren half-curtains — including one, in the ladies’ room, featuring necktied, male Hello Kitties adorned with dollar signs. The gleaming prominence of large taxidermed fish on the restaurant’s walls is explained by a framed clipping about Lin’s father, a chef and champion saltwater angler.

Overlooked by a pufferfish and a sailfish waits the sushi: as many as seventeen different types set out at once. Lin makes them, gauging carefully how many to prepare based on how full the restaurant is at any given time. With several friends, he cofounded Natori sushi buffet sixteen years ago in San Francisco’s Richmond District. In those days, Szeto says, sushi buffets were catching on in Los Angeles but still unknown in the Bay Area. At Natori, a Japanese sushi master trained Lin, who is Taiwanese. Szeto is from Hong Kong. That’s why, along with soft classical music, the languages drifting out of Edoko’s kitchen are Mandarin, Cantonese, and Spanish — but not Japanese.

Toothsome little cucumber kappamaki and avocado hosomaki beckoned us vegetarians, as did pert sunshine-bright omelet nigiri and stuffed-tofu-pouch inari, named for the androgynous Shinto rice deity. Tuffy battened on the wakame maki, topped with electric-green seaweed-strand bouquets. Julian’s eyes slid shut with delight as he bit, smiling, into a maki topped with thinly sliced diced squid: “Playfully chewy,” he said right before those eyes popped back open, spurting tears, because the wasabi here packs an extraordinary punch. (There’s your fun-loving uncle again.) Tuffy, spasming in his chair, described this as “being hit by a ball-peen hammer on the inside of your head.”

On weekend nights, Edoko also offers sashimi. Some regulars come especially — and only — for this, plodding back and forth past our table bearing plates piled high with salmon and tuna rectangles. Julian savored the salmon, describing an “almost-crunch as close as you can get to the border between meat and creaminess,” which yielded, he said, “a pure sea taste.” He declared the grilled-eel sushi — unagi nigiri — savory and melt-in-the-mouth soft, tasting at first like chicken, then flowering into something rarer, something wild.

A specialty here — Jenny Szeto says Lin and his pals invented it — is tempura sushi: not maki stuffed with bits of tempura, as you can find almost anywhere, but whole unsliced maki — stuffed with salmon, chicken, or pickles, depending — dipped into tempura batter, fried golden, then sliced and topped with a thick sweetish sauce. Recoil, O purists. But the result is dizzyingly rich, the seaweed crackly-then-chewy, the rice and fillings rendered assertive and indulgent. It’s Berkeley fusion-cuisine’s answer to deep-fried Mars bars.

A steam table expands the all-you-can-eats to include two kinds of soup, an organic-greens salad bar, fried fish, chicken teriyaki, mussels in their shells, vegetable and seafood tempura, thick braised noodles, better-than-you’d-expect soybean-studded fried rice, and sparkily garlicky sautéed green beans. Any of these could constitute a meal in itself, though the noodles could stand to be a bit warmer. Tuffy kept going back for broccoli, eggplant, and kabocha tempura. The latter is Japanese pumpkin, vivid coral-orange with its blackish-green rind intact. Julian alternated between bowls of hot miso soup (a DIY deal, as diners add tofu, seaweed, and green onion to their liking) and seafood-egg-flower soup whose velvety thickness, lacy egg, and chunks of imitation crabmeat he found satisfying on a frigid winter night.

As cars whisk past outside, their headlights a spumoni-colored wash through the large storefront windows, regulars linger at Edoko for hours on end. We watched a grandfather feeding a toddler with his chopsticks as buff Dad and pregnant Mom paced themselves over five plates each. A solitary student-type worked his solemn way through Noam Chomsky’s What We Say Goes. A couple giggled, holding hands, switching from cake to salad, back to sushi, back to cake.