.Review: ‘Shrek the Musical’ at Berkeley Playhouse Is a Roaring Good Time

The greatest fairy tale never told gets a musical makeover. 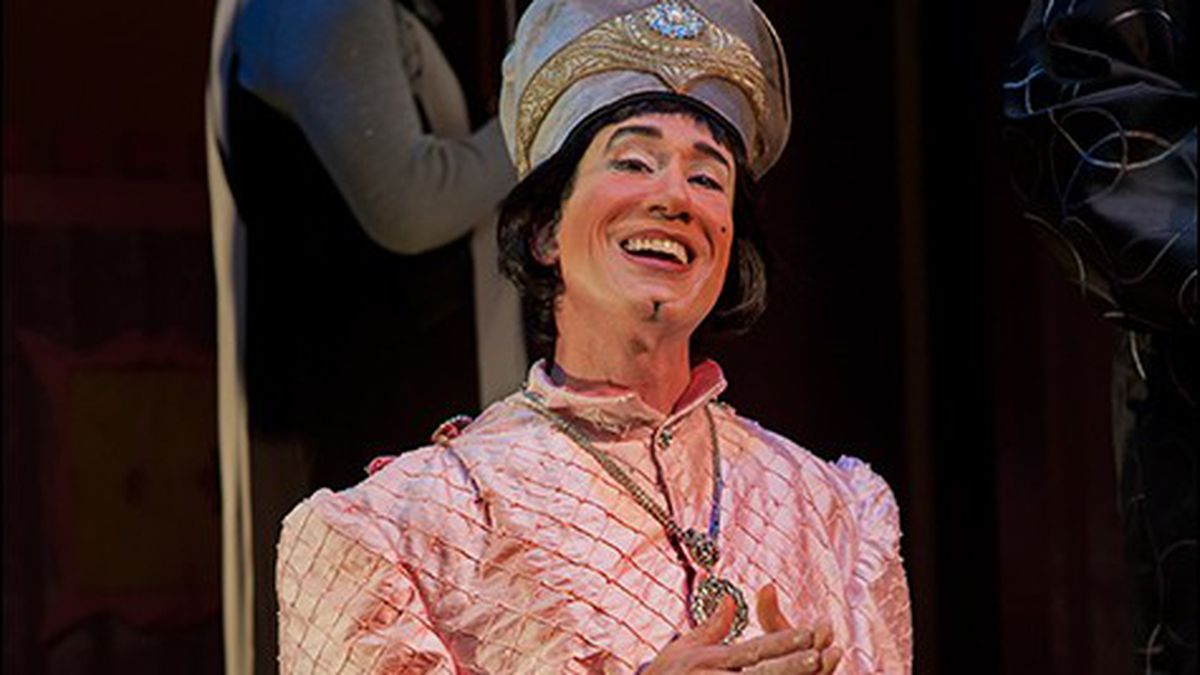 Traditional fairy tales are often snoozers, full of froufrou princesses that sing to rodents and white-bread princes whose only “charms” seem to be providing last-minute lip service to their comatose girlfriends. We know who the bad guy is because he or she always wears some kind of cape. And on and on. What’s great about Shrek the Musical, the latest production from Berkeley Playhouse, is that it mocks those conventions at the same time that it revels in them, with spirited dance numbers and infectious glee.

You probably know the plot if you’ve seen the DreamWorks Animation movie starring Mike Myers and Eddie Murphy, read the book by William Steig, or have stoner friends. If not, here’s an overview. The creatures from many classic fairy tales (Pinocchio, the three little pigs, the seven dwarfs, the gingerbread man, the wolf from Little Red Riding Hood, etc.) have been cast out of the kingdom by the short-statured and short-tempered Lord Farquaad (played in this production by Clay David), and into the swamp of Shrek (Tony Panighetti). Not fond of the company, the ogre heads to Farquaad’s castle, along with the motormouth Donkey (Brian Dauglash) to plead with the cruel and fey ruler. Farquaad agrees to give Shrek the deed to his swamp if he rescues the sassy princess Fiona (Chloe Condon), who’s been trapped in a dragon-guarded tower since she was seven, and needs to find her one true love to break the curse that turns her into an ogre every night.

As the show’s boorish-yet-endearing protagonist, Shrek was somewhat underwhelming. Panighetti has a powerful voice, to be sure, and he nailed the Scottish accent, but his affect was fairly tame as he ambled along his journey, as if the bigness of the padded ogre costume was getting in the way of the bigness of his character. Shrek’s personality starts to shine through once his interactions with Fiona pick up steam in Act Two, and their comic back-and-forth gives the production some much-needed oomph. While her singing was a bit nasally at times, Condon possessed headstrong energy and searing wit. In the song “Morning Person,” the recently released Fiona sings of the potential joys that every new day brings, even as her excitability ruins all the things she touches. The scene makes fun of the usual communing with nature that most fairy tale heroines engage in. Whether she’s killing birds with her falsetto, beheading Bambi, or tap-dancing with a chorus line of rats, Condon brings a signature verve and pomp to the princess oeuvre.

However, David, as the villainous puppet-legged Lord Farquaad, was the real showstopper. His gleeful prima-donna primness and vaudevillian showmanship were incredibly fun to watch. I almost found myself rooting for him to win, especially considering the fact that he spent the entirety of his stage time, including several dance numbers, on his knees in order to create Farquaad’s dwarfed frame. Other props go to the winning and spirited ensemble cast, made up of actors of all ages. In particular, the gal playing Humpty Dumpty commanded the entire stage whenever she was on it, despite having very few lines, and her pipes were exceptional. And Matthew McCoy’s direction and choreography were tight, jazzy, and full of fantastical appeal.

Though the musical is ostensibly for children, adult humor abounds — but don’t worry, parents, the grown-up jokes should go right over the kids’ heads. Many pop-culture references also make their way into the play — Kim and Kanye’s recent wedding, for instance, and Carly Rae Jepson’s “Call Me Maybe.” Other musicals, including Dreamgirls and Rent, also get a few nods.

There were some, shall we say, interesting wardrobe choices made by the costume team (Wendy Ross Kaufman and Leona Schrader Dee). Some of the outfits were fanciful and terrific — those of Pinocchio, the dragon, and the three blind mice, for instance — while others were crude and somewhat distracting (Shrek’s parents wore paper cutouts tacked to their bodies, and Donkey’s face makeup looked more grandmotherly than equine). Since Berkeley Playhouse involves many children in its productions, it’s possible that these inconsistencies were a result of that fact, in which case I am an asshole, and you may disregard this paragraph in its entirety. In any case, even if the costumes were distracting at times, Robert Broadfoot’s scenery and set design, which captured much of the untamed majesty of a fairy tale world and Steig’s original drawings, were wonderful.

The songs are as uplifting as they are sly and clever, with book and lyrics by Pulitzer Prize-winner David Lindsay-Abaire, and music by Jeanine Tesori. It’s a show full of substance, and despite its goal of subverting the fairy tale genre, of course love prevails, good triumphs over evil, and the ending is sure to leave you living happily ever after — or at least for the next several hours.