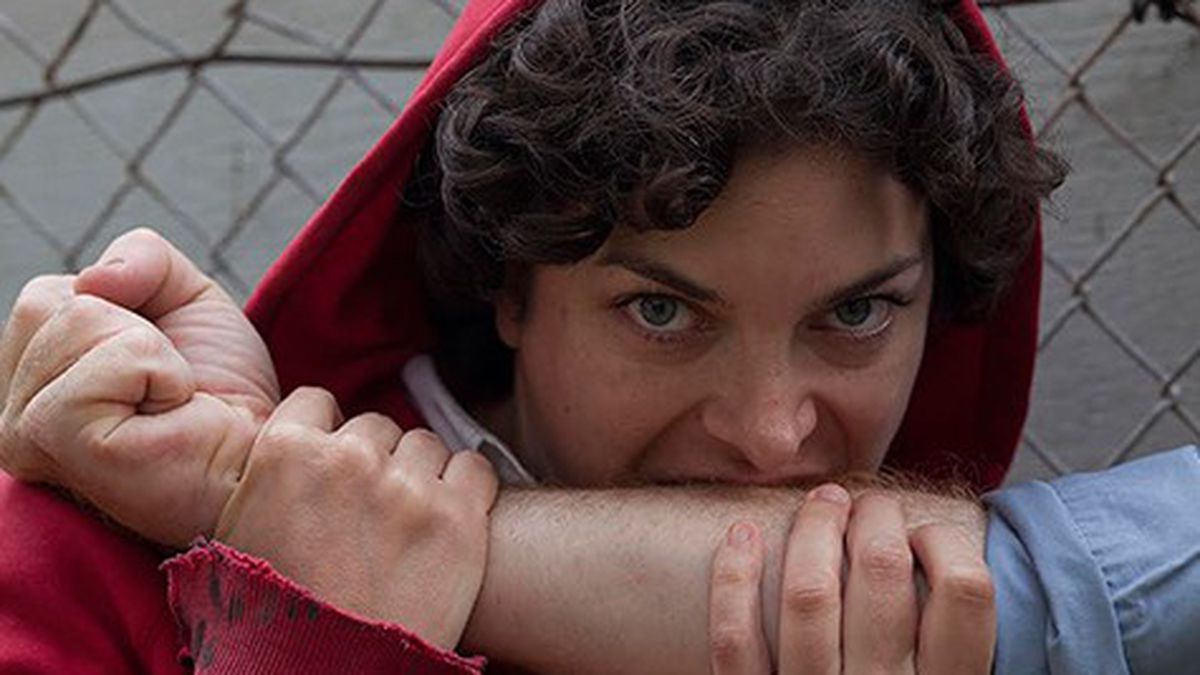 Review: “Redwolf” by Ragged Wing Is a Modern, Sexy Take on the Classic Fairy Tale

Who's afraid of the big bad wolf?

In this modern version, Little Red Riding Hood, referred to simply as Red in the show — and played with a voracious, wide-eyed innocence by Carlye Pollack — is a teenager living in the woods. Her mother has abandoned her, and she’s forced to fend for herself against big bad predators, such as Wendell (Keith Davis), the city engineer who is set on demolishing Red’s house in order to build a freeway; Red’s teacher (Jaime Currier), who thinks Red needs adult help putting her life back on track; Dogg (David Stein), her reticent neighbor, who has a habit of barking viciously at strangers; and even her classmate Wyatt, Wendell’s son (Dan Kurtz), who can’t stop watching Red during trigonometry.

Red’s school lessons on triangles prove to be useful later on, when she becomes embroiled in a father/son love triangle with Wendell and Wyatt.

This Red is no passive damsel in distress waiting for a strapping woodsman to save her. She goes after what she wants, and has no trouble asserting herself in adult realms or questioning authority. In fact, almost all of the characters undergo a process of re-education, which gives the story an incisive, postmodern edginess.

Speaking of edgy, Redwolf plays adeptly with the moody and atmospheric. It’s at times sinister and shocking (for the prudish or squeamish theatergoer: The two sex scenes are brief and tasteful. However, one scene does involve both male and female full-frontals, and Ragged Wing recommends audience members be at least sixteen years old.). For all of its darkness and eroticism, Redwolf is also light and playful. A few of the show’s more frolicsome elements include foreplay with hand puppets, a stripping fight scene, and a large vagina diagram, showcasing a helpful “map” of the female anatomy for the teenage Wyatt.

One of my favorite characters was a mashup of the original story’s Grandmother and the Woodsman, played with a reluctant, ragged stoicism by Cecilia Palmtag. Instead of getting eaten by the wolf, as the old story would have it, Redwolf‘s version of Grandma is a badass, axe-wielding hunter, who kills and cooks opossums and drops the most telling truth bombs on Red and the others. Plus, she has some of the funniest lines. “I guess you’re all staying for dinner then?” she asks, adding, “You assholes. You know I’m a hermit.”

Co-written by Amy Sass and Anthony Clarvoe, and directed by Sass, Redwolf plays up the symbolism and wolf origin stories plentifully, as well as provides homages to prominent fairy tale wolf dialogue. Red even refers to her genitalia as “wolf,” and has something of a biting fetish. It’s an interesting juxtaposition — the play offers no one “wolf,” no central evil to be overcome. Instead, Sass and Clarvoe problematize the moral construction of fairy tales by making all of the characters wolves of sorts, including and especially the story’s supposedly innocent protagonist, whose hairy arms, legs, and sex frighten many, including her teenage paramour. The play’s climactic tango involves a “fur reveal” of a different sort, and one that you’ll just have to experience yourselves — I won’t give away the magic.

Audience members who want to delve deeper into the play’s meanings and symbols can attend post-show conversations during three Saturday matinees. Topics include “The Paved and the Wild” (October 25), “The Wilderness of Sex” (November 1), and “Predator and Prey” (November 8), and all talks are included with the price of admission.

The members of the small, but adept cast each play multiple roles, as well as help to arrange the minimal, almost apocalyptic set (designed by Erik LaDue) during transitions. And keeping with the previously mentioned musical trend of this fall’s theater productions (“Noteworthy,” 8/27/2014), much of the cast also sings and dances, exhibiting haunting vocal numbers at times and a drone-like, militaristic precision at others. There’s a definite dystopian, 1984 feel encapsulated in the play. Indeed, Redwolf makes salient (but not ham-handed) points about the “Other,” wild spaces lost to development, class struggles, and our cultural fears surrounding untamed female sexuality, all with a seductiveness and humor that is commonly missing in the fairy tale genre.

Theatergoers shouldn’t expect an easy happily-ever-after ending from this modern retelling, but Redwolf does succeed in bringing the house down.

Bay Area Schools Will Be Closed Thursday Due to Storm