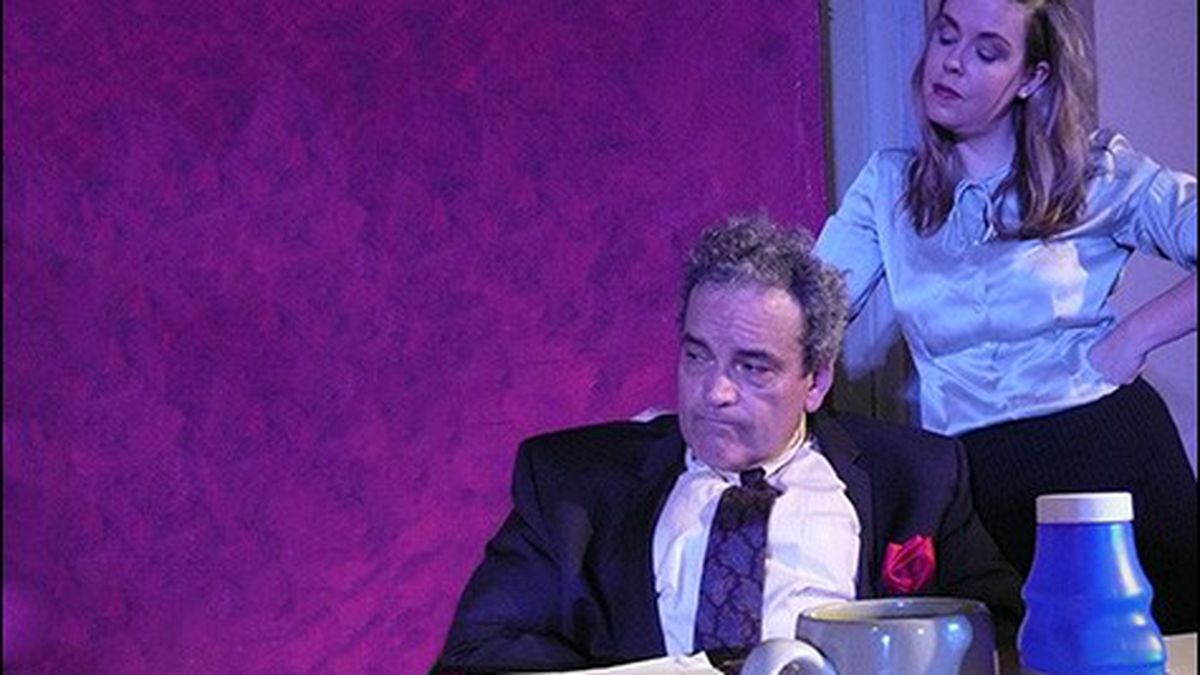 Come for the greed and sex, stay for the doughnuts.

Other People’s Money involves a battle between a Wall Street corporate raider, Garfield (the booming, irrepressible John Hale), and the company he’s trying to liquidate, led by its old-school CEO, Jorgenson (the affably sincere Keith Jefferds), who’s trying to protect his 1,200 employees from getting the axe. Written by Jerry Sterner, it contains overt themes of corporate greed and copious explanations of business terminology such as “shark repellent,” “poison pill,” and “greenmail.” While that may sound like an unlikely entertainment experience, the play was a considerable hit when it debuted in New York in the late Eighties. It was voted Best Off-Broadway play by the Outer Critics Circle, and it was also made into a movie starring Danny DeVito in 1991. Even Donald Trump endorsed it, calling it “an extraordinarily insightful, timely and witty play — beautifully performed.”

“Other People’s Money to some could seem a melodrama — good guys versus bad guys,” said John McMullen, who is directing the play for Piedmont Oakland Repertory Theatre. “To me, it is a central dramatic argument between two equally valid points of view.” That’s not a typical perspective in the Bay Area, especially considering that both leading men are conservatives — they have the same framed portrait of Ronald Reagan hanging in their offices.

Luckily, you don’t have to be a Trump type to enjoy the plucky and well-acted Other People’s Money. While the first act is slow to start, and some dialogue reads like something out of a business journal, the play features exquisite power plays and the compelling-yet-repelling Garfield, whose cunning, self-deprecation, dancey rejoinders, and fetish for doughnuts make him, if not relatable, then at least highly watchable.

As in real life, who the “good guys” and “bad guys” are in Other People’s Money isn’t clear-cut. Once Jorgenson learns of Garfield’s nefarious plans to gut his beloved yet undervalued company, New England Wire and Cable, he decides to fight back, enlisting help from his second in command, Coles (played with a tight-lipped scrutiny by Brett Mermer), and Bea, Jorgenson’s assistant and paramour (the subdued yet steely Elizabeth Jane Dunne). They quickly enlist the services of Bea’s daughter Kate (Karly Shea), a powerful attorney for Morgan Stanley whose ambition is matched by her sexual prowess.

Kate and Garfield’s oddly seductive dance and barb-slinging buoy the production in the second half. There’s something both transfixing and upsetting about their courtship subplot — like being unable to look away from a traffic accident. Perhaps it’s the disparity in their ages and levels of attractiveness, or Garfield’s lurid, excitable avarice, but regardless, the duo’s charged rapport more than makes up for the play’s slower moments.

With the exception of Bea (and to a lesser extent Jorgenson), the moral compasses of the other characters tend to swing erratically throughout the play. Hanging in the balance are the lives of New England Wire and Cable’s 1,200 employees, who we never see, but who represent the real underdogs of the play — because, regardless of the outcome, Jorgenson and Coles will still walk away millionaires.

The metaphor of the underdog is an apt one, however, and not just because Bay Area residents have been so focused on income inequality as of late. Piedmont Oakland Repertory Theatre is the newest theater company on the East Bay scene, making it the only semi-pro theater group for adults in Oakland — except for Ragged Wing Ensemble, which is currently raising funds for Flight Deck, a theater space, rehearsal room, gallery, and co-working space in downtown Oakland. Piedmont Oakland Repertory Theatre doesn’t yet have a dedicated space of its own, so Other People’s Money is staged in a synagogue, where hospitality and charm were in direct opposition to the corporate fat-cat squabbles playing out just in its pews.

By the play’s end, however, Other People’s Money stirs us into imagining the possibility of a better future instead of resigning ourselves to the omnipresent “business as usual.”