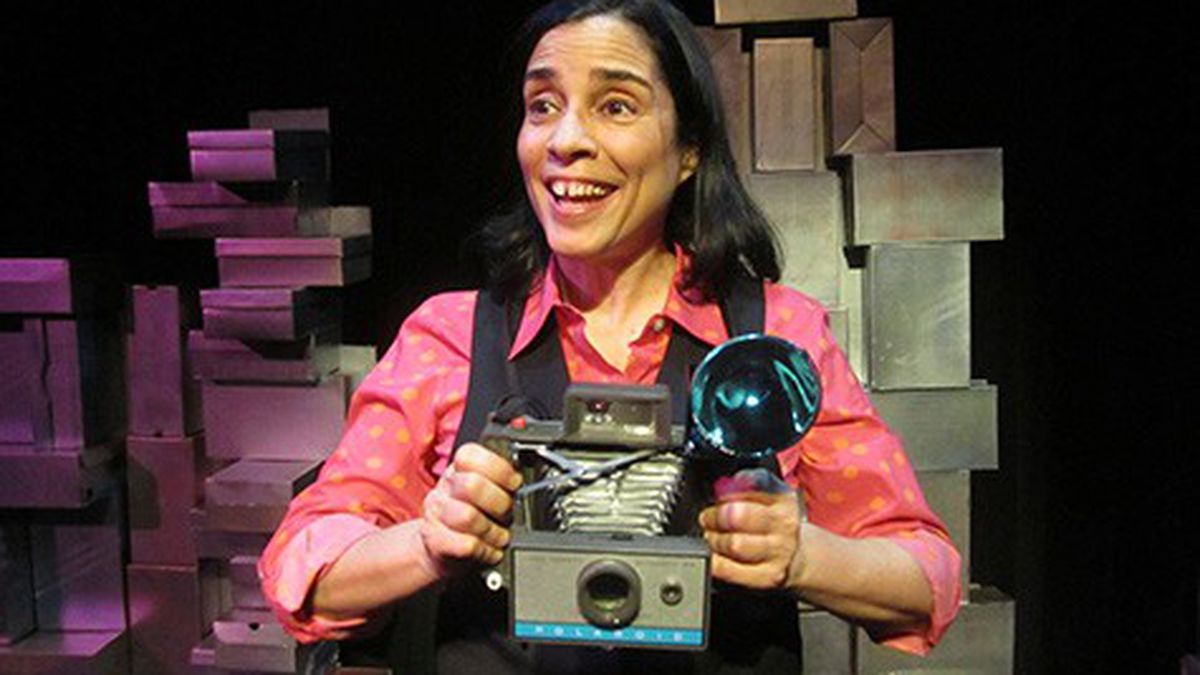 Review: Lovebirds Is a Hilarious Romp Through the Swingin’ Seventies

Get some tale at Marga Gomez's tenth solo show, now playing at The Marsh Berkeley.

Marga Gomez is back in the East Bay and better than ever. In Lovebirds, her tenth solo show, now playing at The Marsh Berkeley, Gomez takes us on a trip (sometimes in the druggy sense) through the interwoven love lives of a quirky, motley crew of characters in New York’s Greenwich Village during the swingin’ Seventies, with an eccentric photographer, Polaroid Phillie, guiding us. Phillie makes her living selling $10 “vintage” Polaroid photos to unsuspecting couples, doling out somber advice, and telling stories of couples she once knew.

There’s Orestes, a macho Spanish restaurant and nightclub owner, who only loves married women “until they’re married to him anyway.” There’s his daughter, Barbara (the funniest character), an earnest, newly out Women’s Studies major hell-bent on ridding the world of every phallocentric oppression that she learns about through her “lesbian feminist separatist gathering.” During her sexual awakening she meets Turkey (also hilarious), an old school butch who takes Barbara (who renames herself Dahlia) for rides on her motorcycle and thinks one date means they are irrevocably bound to each other. Barbara-Dahlia finds Turkey’s ways too possessive and heteronormative, however, preferring the affections of her Women’s Studies teacher, Dr. Aurora Flashmoon (which I misheard as “fleshwound,” and which also would have been a fitting moniker), author of Uterus: You Tear Us! We meet another NYU professor, the bloated and stuffy Dr. Richard Richards, married to Gladys, the tone-deaf nightclub singer on whom Orestes has his eye. Richard believes that people only need 45 minutes of sleep a night, and spends all of his stage time nodding off mid-sentence — and once, inspiring a kind of acid-trip dream sequence involving interpretive dance, a “talking sponge,” and a feminist awakening. And lastly, Gomez herself is interjected into the lives of these wily characters, meeting Barbara in present-day New York, and going on a five-hour-long date with her only to learn a surprising (though not surprising if you’re a queer lady) revelation at the end (I won’t ruin it).

Lovebirds is short (seventy minutes with no intermission), thoughtful without being preachy, and an incisive look at the pursuit of love in all the wrong places. Gomez reminds us that the Seventies were a time when “the lesbians kept getting screwed, but not by each other,” through satirical observations, comical stereotypes of the “gay ladies discotheque,” and through giving us characters who are well-meaning but perhaps not the brightest folks when it comes to love (but then, who is?). Indeed, Lovebirds was one of the rare shows that I wouldn’t have minded it being longer than it was.

Crafted by Gomez and her frequent collaborator, director David Schweizer, Lovebirds involves a sparse set (designed by Vola Ruben) typical of solo shows, with a background of shoeboxes arranged in a Manhattan skyline fashion and spray-painted silver. The shoeboxes are full of Polaroids, naturally — memories of lovers past that Polaroid Phillie employs to help her tell her tales. Gomez bucks the solo show trend by straying (mostly) from the autobiographical, which was a welcome and refreshing change.

Gomez also excelled at delineating and capturing her distinctive characters — each had exquisite tics and easily recognizable personalities and cues, making it easy to tell who was speaking, which can sometimes be a struggle with solo works. Barbara-Dahlia’s insecure arm-clutching was particularly memorable, as were Turkey’s swaggering pelvic thrusts and deep-voiced bravado. All were portrayed with an abundance of unself-aware humor.

Be sure to stick around and grab a drink after the show, as the cocktails are cheap and Lovebirds-themed, and Gomez told me she might have a “make out box” — literally a big cardboard box set up in the corner of The Marsh lounge where lovebirds can share a smooch in semi-private — on the show’s closing night, October 18. “Like Seven Minutes in Heaven?” I asked, remembering the high school “game” where two (often unwilling) people were selected to make out in a closet for seven minutes while their friends giggled outside. “That seems too long,” she said. “Maybe thirty seconds in heaven.” Making out in a box for half a minute, while perhaps not exactly fitting most people’s description of “heavenly,” would at least make for an interesting night out at the theater. Let’s hope it happens.