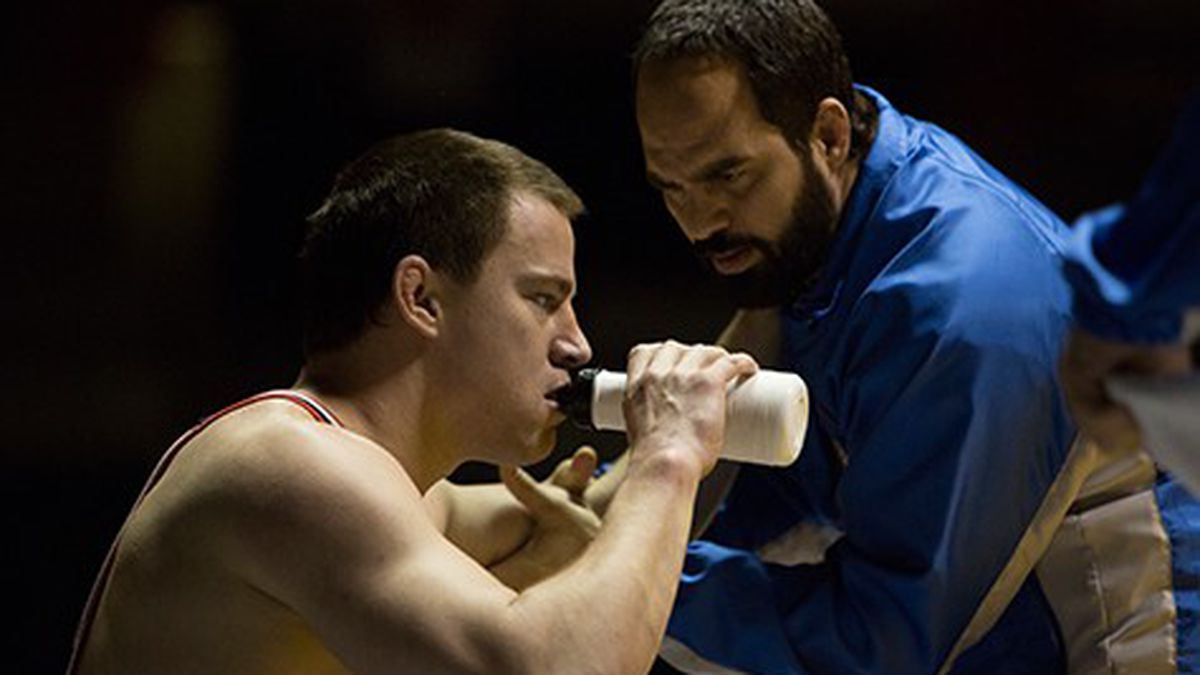 A drama that grows more bizarre by the minute.

A few years before his death, the macabre illustrator and writer Edward Gorey published a collection of interviews called Ascending Peculiarity. That title came to mind in the middle of watching Foxcatcher, a drama that grows more bizarre by the minute.

The film, directed by Bennett Miller (Moneyball, Capote) and written by Dan Futterman and E. Max Frye, is based on a sensational 1996 murder case involving John E. du Pont, heir to the du Pont chemical fortune, and Dave Schultz, an Olympic champion wrestler in du Pont’s employ. Du Pont shot Schultz to death in front of witnesses at Schultz’s residence on the du Pont family estate, Foxcatcher Farm, outside Philadelphia. The crime made national headlines for all the usual reasons, but some details of the motivation were left ambiguous in news reports. The movie takes us deeper into the story behind the murder, and the deeper it probes, the more unsettling it becomes.

Mark Schultz (Channing Tatum) is a former Olympic wrestling gold medalist, training with his wrestling-coach brother Dave (Mark Ruffalo), working odd jobs, living alone, and eating ramen when he gets an ominous-sounding phone call from someone representing John du Pont. Mark doesn’t especially recognize the name, but the caller invites him to du Pont’s estate in Pennsylvania, all expenses paid, to discuss a matter that will be revealed at the meeting. Mark is a docile, taciturn — some might say slow-witted — young man who lives for wrestling and reveres his older brother, but gold medals do not pay the rent. Mark takes the trip, and within days is installed in a Foxcatcher Farm guest chalet and enrolled in a private amateur wrestling program with a number of other athletes, also living on the du Pont estate, to train for future Olympic and world championship competitions.

Steve Carell has handled a variety of comic leading man and character roles, but for concentrated other-ness nothing comes close to his John E. du Pont. Hidden behind a sinister prosthetic nose and conversing in an eerie monotone like a country squire Count Dracula, Carell’s du Pont is the strangest movie character of the year — practically a poster boy for the corrupting influence of great wealth. Under the disapproving eye of his patrician mother, Jean (Vanessa Redgrave at her loftiest), the younger du Pont occupies his time with bird-watching, playing war-enactment games, and delivering patriotic speeches to fellow right-wing billionaires. He also collects military heavy hardware and operates a shooting range for law enforcement officers.

The wrestling academy may well be intended as a clandestine private army, but having his own team of brawny men on payroll evidently satisfies the master’s physical needs as well. Du Pont orders his wrestlers to address him as “Golden Eagle.” He stages awkward “coaching” demos and sham “senior wrestling matches,” which he always wins, in an attempt to prove himself to his mother, who sees right through him (“It’s a low sport,” she sniffs). There are professionally shot beefcake photo sessions, and midnight “practice in the gallery,” a bizarre man-to-man ritual in a dimly lit room — the camera seems afraid to get too close. Massages, beer, cocaine, and implied sex gradually become part of Mark’s routine, and his fitness dissipates (when he complains, du Pont yells at him, “You ungrateful ape!”). Mark needs help. At du Pont’s urging, brother Dave moves to the farm with his wife and children, in order to help focus the Olympic effort, and complications arise.

What an odd movie. Carell, Tatum, Ruffalo, and Redgrave all give detailed, convincing performances, but the story, and the way it’s told, are so suffocatingly sick (that’s the only word for it) that they overwhelm the experience. Director Miller and his writers conduct their tour of the inner sanctums of the rich and powerful coldly and clinically, with extreme prejudice, but we leave the theater with a queasy feeling, as if we’ve stayed too long at a peep show.