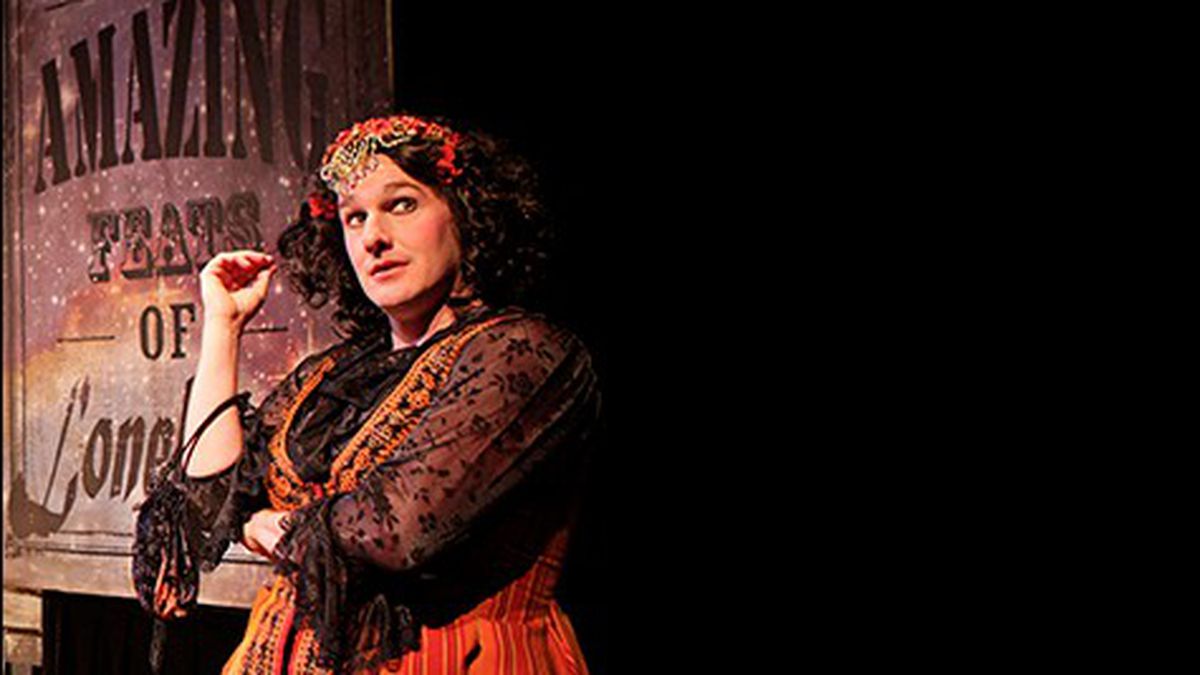 An exploration of love and loss, with bear wrestling.

On its surface, Shotgun Players’ Edward Gant’s Amazing Feats of Loneliness (playing through January 11 at The Ashby Stage) is about a troupe of traveling, Edwardian circus-esque performers reenacting preposterous tales of heartache out of the back of a truck. Underneath the sheen of improbability and performativity, however, lie big questions about life, humanity, storytelling, and, perhaps most importantly, the point of theater. The tales, or feats of loneliness as it were, become more elaborate and bizarre as the show wears on — a young Italian girl’s pimples transform into pearls when popped, a soldier undergoes brain surgery in a cave in Nepal in order to forget his lost love, a forgotten teddy bear’s only wish is for imaginary tea and cake, etc. — until they reach a point that’s so absurd the play comes forcibly to a halt when a company member breaks character, refusing to participate in the spectacle of the show any longer. The debate he stirs up about theatrical culpability, art, and reality escalates until the play’s paradoxically climatic and anti-climatic zenith (I won’t ruin it for you, but Gant’s final bow is a show-stopper).

Gant (Brian Herndon) brings a subsumed intensity and dignified flair to his task as narrator and facilitator of lonely tales, and his misfits (Ryan Drummond, Patrick Kelly Jones, and Sarah Moser) are savvy entertainers — at turns sincere, saccharine, or banana sandwiches depending on the task at hand. The acting style is grotesque and over-the-top, mimicking the macabre comedy and Edward Gorey aesthetic of traveling trunk shows from the 1880s, and brimming with WTFness. Despite the fact that the play takes on the familiar refrain of heartache, Edward Gant’s Amazing Feats of Loneliness is one of the few plays that has ever forced me to drop my pen, stop taking notes, and give my undivided attention to what was unfolding. For the great majority of the play, I genuinely had no idea what was going to happen next, and this perplexed stupor lasted long after I’d left the Ashby Stage’s intimate theater space.

“This play is pure theater,” said director Beth Wilmurt. “It is about the transformative power of storytelling.” And it is, but it’s also 90 percent shenanigans: Not just one but two bear costumes make appearances, a balloon-sized pimple filled with a viscous, cheese-like substance kills its owner, and a woman’s husband leaves her for an oyster (“because she had mystery,” obviously). These are just a few examples of the playwright Andrew Neilson’s theatrical fuckery. But just as we are about to nosedive over the edge of absurdity, we are reeled back in with a swift kick of sentimentality, a built-in pause to reflect on our mortality (in actuality, to allow costume and set changes), or a live musical interlude with singing, accordion-playing, and the faint percussive scrapings of a wooden guiro.

At the play’s weirdest moment, Herndon, playing the Terrible Phantom of the Dry, a ghost who shows up when actors forget their lines, takes Jones to a kind of theater purgatory until he can remember the final lines to his poem about whimsy. It’s in this limbo state that Jones becomes fed up with Gant, the show, and the ideals it claims to espouse, but not before engaging in fisticuffs with a bear, and a few jokes about abortion and suffragettes. What? You may be asking yourself. Or, if you’re feeling some hump-day laziness, Wha? And you won’t stop asking yourself that throughout the play’s duration, which is one of Gant’s great triumphs. It’s the mystery and weirdness that keep us wondering, both in life and during the feats of loneliness.

Set designer Nina Ball remarkably recreates the vaudeville vibe with understated panache. The play literally unfolds from a truck bed. A small, square stage protrudes from it, and occasional landscape paintings serve as backdrops for location prompts, but otherwise the design is sparse, leaving the wonderment work to the stories themselves.

While the tomfoolery borders on tiresome after a while (the humor is somewhat crass, but not gratuitously so) and the play-within-a-play plot device is a bit too jarring to be exceptional, the fast-paced flow and assuredness of the actors guarantees that they had our complete, if not bewildered, attention throughout. Besides, the antics are the point. Jogging alongside the slapstick and the strangeness are explorations of magic, loss, and love. As the freak show comes to a head, the underlying tone becomes existential, questioning not just the limitations of humanity but theater as well.

As Gant puts it, “In a world where death is at our shoulder every hour, even the smallest act of creativity is a marvelous, courageous thing.” Indeed it is. Remember this the next time your lover leaves you for a shellfish.

Waiting for a DREAM

An Exhibit to Dye For