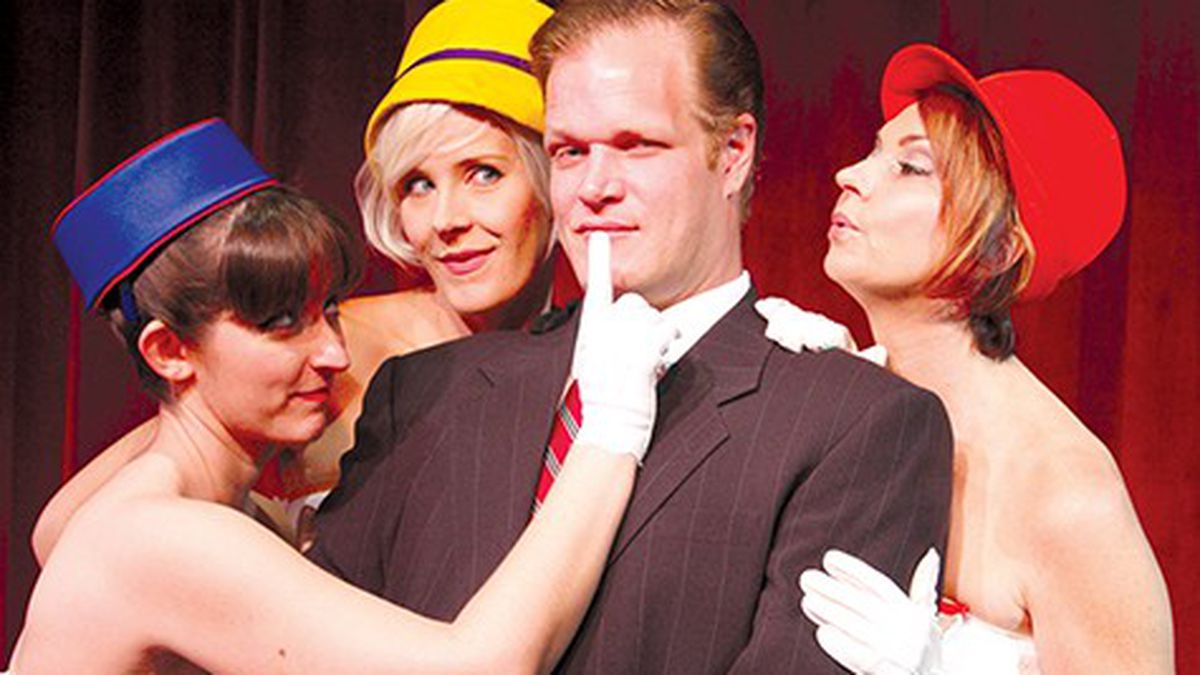 Come for the slapstick, stay for the cheeky, 1960s grandiosity.

By most rational measures, Boeing Boeing, a sudsy, French comedy from the 1960s, shouldn’t be as enjoyable as it is. For starters, it’s about a rich and naïve playboy living in Paris who has duped three beautiful air hostesses into thinking each of them is the only one engaged to him. It’s rife with outdated gender politics, over-the-top accents, and slapstick that is so slapstick-y it borders on physical abuse. Even its title is absurd, a pun on the sound effect we might have heard fifty years ago when two characters in a sitcom were caught making out in a coat closet (ba dum ching?). And yet, Boeing Boeing, the latest comedy to come out of Altarena’s homey theater in Alameda, succeeds in spite of (or perhaps because of) all these traits.

Bernard (the svelte Matt Davis), is an American architect who believes he has love down to a science. By dating three air hostesses — Gloria, the American (Rhonda Taylor), Gabriella, the Italian (Laura Morgan), and Gretchen, the German (Jayme Catalano) — Bernard thinks he can game the marriage system by dating women who operate on vastly different time tables (he keeps a book of all the airlines’ schedules to make sure there are no overlaps), and thus can harness all the variety and excitement of dating multiple women, without the drama and boredom that comes with typical monogamous arrangements. He’s aided (reluctantly) in these wily, three-timing pursuits by his cynical and visibly ornery housekeeper Berthe (the crowd-pleaser Sue Trigg). Despite all testament to reason, Bernard’s triple life has been going swimmingly, until his Wisconsin friend (pronounced Wis-caah-saaan) Robert (Charles Woodson Parker) shows up at the same time that fate lands all of Bernard’s fiancées in Paris on the same night! Somebody get me a slide whistle!

Boeing, written by French playwright Marc Camoletti, has received mixed responses during its on-again, take-off-again lifespan. Audiences loved it in England when it first came out, where it ran for seven years; and they hated it in New York, where it ran for 23 days. Similarly, its film adaptation starring Jerry Lewis and Tony Curtis is considered mediocre at best (perhaps owing to its tagline: “The big comedy of nineteen-sexty-sex”?). In 2008, however, Boeing was revived and revamped in the United States, receiving much success the second time around, and even bringing home two Tony Awards.

Part of what makes Boeing‘s revival a triumph is the way in which it takes the laughable stereotypes and conventions of the “sexties” and exaggerates them to the point that they are genuinely laughable. Take, for instance, the ladies. Each is a bombshell who exploits the most obvious traits of her home country. Gloria, the American, is obsessed with money and putting ketchup on things. Gabriella, the Italian, is all romance and hot-headedness, and Gretchen, the German, is a righteous defender of sauerkraut, frankfurters, and screaming (Catalano dominates every scene she’s in, both physically and charismatically, to great effect). And Berthe is the epitome of the snooty, opinionated French maid. While I could have done with slightly less renditions of her angry pelvic thrusting, her presence on stage signified that audience members should ready their mental laugh tracks. Her facial expressions alone practically deserved their own byline.

Bernard and Robert, on the other hand, exploit the well-worn trope of “men behaving like dopes” — the kind of dopeyness that involves groin-kicks, “gay” wrestling scenes, and a lot of necking. For all of the men’s assuredness, money, and bravado, it’s clearly the women who run this show. How could they when the sight of a naked woman causes them to fall to the ground and spasm?

The set by George Ledo is an odd mishmash of mod and IKEA, and the quiet sparseness works quite well with all the crazed door-slamming and tumbling to the floor. The plot’s unraveling is also predictably wacky, and requires, at times, a hearty dose of suspended disbelief, which is part of the enjoyment, as well. The ill-fated scenarios are zany, to be sure, but innocent enough that we can’t help but root for Bernard to worm his way out of this pickle and for Robert to find a dream girl of his own. But, as with any airplane-related comedy, audiences should expect plenty of turbulence along the way.