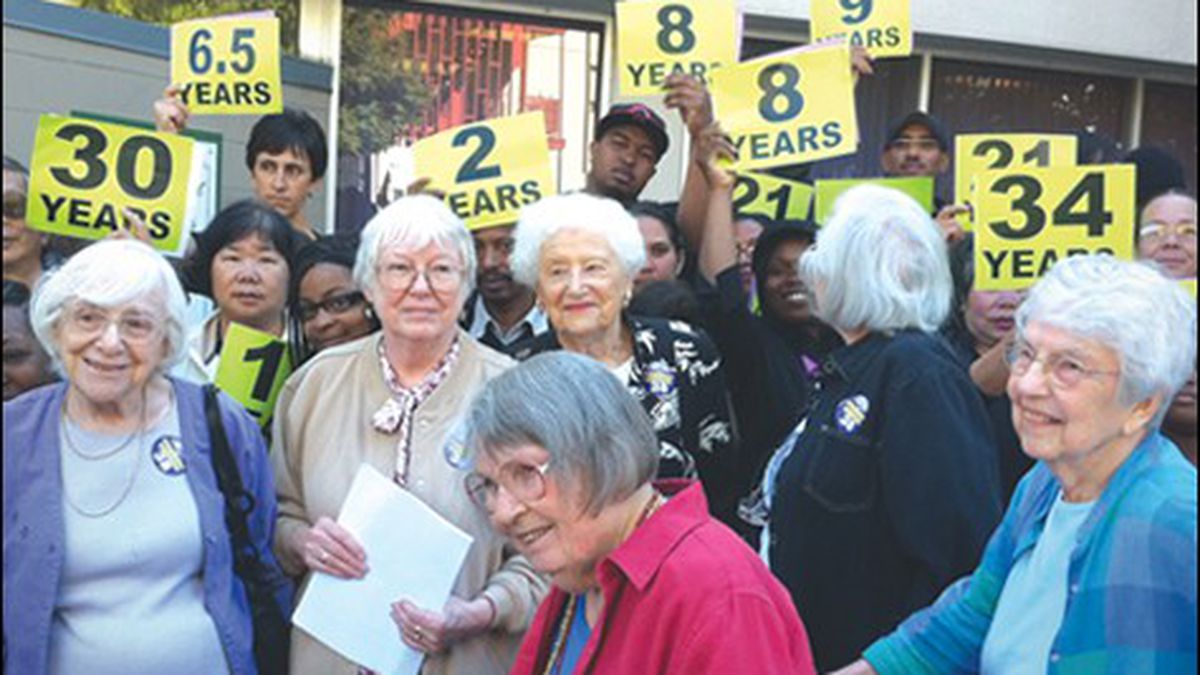 At 92, Jeanette Bello isn’t necessarily the type you’d expect to see on the front lines of a labor rally. She lives in a retirement community on a quiet, tree-lined street in Oakland, doesn’t drive, and rarely gets out. But after 38 employees of her retirement community, Piedmont Gardens, were suddenly replaced after a dispute with the home’s administration, Bello and her neighbors have found themselves caught in the crosshairs. Some are dismayed by a management decision that’s at odds with their own politics, while others are simply upset to be receiving care from unfamiliar and inexperienced workers.

Either way, the dispute — which shows no signs of being resolved any time soon — appears to have stoked activism and anger beyond the two warring sides, as residents have become involved. Several have written letters to Piedmont Gardens Executive Director Gayle Reynolds, dozens participated in recent protests both in Oakland and in Pleasanton, where the Gardens’ parent organization is headquartered, and according to Molly Stolmack and Vera Kahn, who also live at the Gardens, a group of residents has come together and intends to approach the administration about bringing the workers back.

Starting on August 2, about 150 employees of Piedmont Gardens staged a five-day strike after negotiations between representatives from the union, United Health Care Workers West, and the home’s parent organization — American Baptist Homes of the West, a 33-home chain serving some 4,700 residents in four states — stalled. The two parties have been in negotiations since February over pensions, pay, and a host of other points, and the workers have been without a contract since April. Over the weekend of August 6 and 7, 38 of the striking employees, including the entire bargaining team, were informed, either by phone or upon reporting to work, that they were being replaced. Reynolds did not respond to repeated requests for comment, but the retirement home’s lawyer, David Durham, told the Chronicle that the workers had not been permanently replaced, but that there was “no place for them at this time.”

Some residents and employees say that the new administration is bent on beating the union. Yordonas Sega, who was let go after almost seven years at Piedmont Gardens, said that she believed the home’s administration was actively trying to get rid of the union. And SanJanette Fowler, who had been working at the Gardens for twelve years, said she believed the administration as trying to “divide and conquer” by firing only a fraction of the workers. Jarard Kings, spokesman for the Service Employees International Union United Healthcare Workers West, said the company’s directors have “definitely not hidden the fact that they are trying to teach the workers a lesson.” In fact, he said, their lawyers have told the union as much.

On August 16, both parties again entered into negotiations, only to have them fall apart quickly. The union has now filed forty charges with the National Labor Relations Board and asked for an injunctive release, which would give the 38 laid-off workers their jobs back. The union also has filed a handful of claims with the Equal Employment Opportunity Commission on behalf of workers who claim they have been the victims of age and gender discrimination.

And as the fight between the company and its workers rages on with no apparent end in sight, many of Piedmont Gardens’ 400 residents are dismayed to have lost the nurses, chefs, and other caregivers they have come to know well. “We all say the building’s going to fall down now,” Bello said. Dorothy Rice, who has been living at Piedmont Gardens for four years and is currently the president of the resident’s association, said the replacement of workers has “really made this very difficult to live here.” She continued, “These people are very caring, very committed, very hard-working people, and they served us very well. We miss them.” And, moreover, some claim the temporary workers aren’t just unfamiliar — they’re inept. One resident’s daughter recalled receiving a panic-triggering early-morning voicemail from the Gardens saying her mother had been rushed to Summit Hospital — only to call her mother’s apartment and find that she’d been there, safe and sound, the whole time.

Furthermore, in a community populated largely by left-leaning labor sympathizers — Kahn estimates that some 85 percent of the home’s residents are Democrats, and many are retired academics — the lockout carries an added sting that’s not just inconvenient but ideological. Bello, a longtime union supporter who spent her professional life in labor economics, said she was prompted to get involved out of loyalty to the union and sympathy for the displaced workers.”The way in which people who were fired were informed was just terrible,” she said. How are they supposed to live now?”

“Everybody is in mourning. We really loved these people,” Kahn added.”Even the ones who don’t understand anything about the union — they sure miss these employees and want them back.”

Editor’s Note: The original version of this story incorrectly stated that Piedmont Gardens is located in the city of Piedmont. It’s actually located in Oakland. This version has been updated to reflect the change.

Work Your Way Up to the Fucksaw