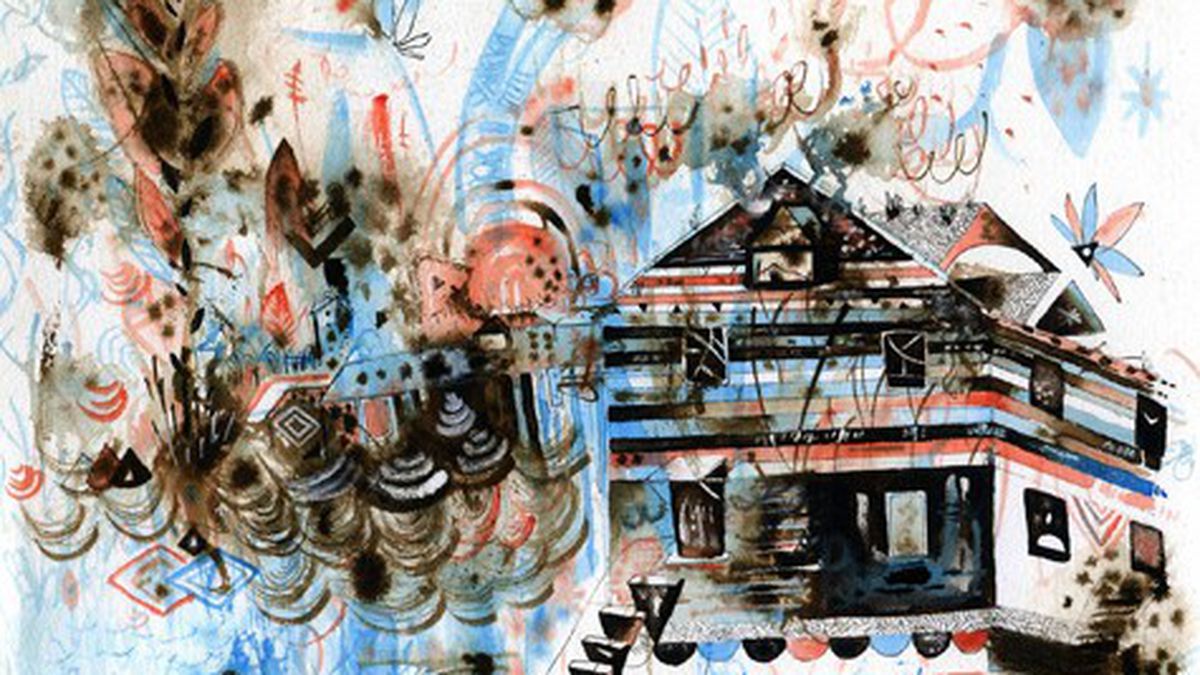 The East Bay visual art scene seems to be at a crossroads, with one foot critically stepping forward into the environmentally unstable and tech-filled future and the other nostalgically looking to the past for help. The result is a picture of the present in relief, molded from a multi-perspective examination of temporality, technology, memory, and identity. Here are the shows that are making the biggest statements in that conversation this fall, and shouldn’t be missed.

The upcoming exhibits at the Oakland Museum of California (1000 Oak St., Oakland) dig up the Bay Area’s cultural and environmental past and explore what that dirt-pile can build us. Above and Below: Stories From Our Changing Bay (August 31, 2013 through February 23, 2014) tells place-based tales of the Bay’s transforming landscape. In conjunction, OMCA will be showing A Cinematic Study of Fog in San Francisco by acclaimed documentary makers Sam Green and Andy Black. Screening November 9 through June 29, 2014, the piece looks at that blanket of clouds that makes San Francisco so distinctive. Running the same exhibition dates, Bay Motion: Capturing San Francisco Bay on Film is a collection of “ephemeral” films presenting San Francisco candidly through amateur filmmaking and advertisements starting from the birth of cinema through the 1970s. And to complete the package of postcards from the past, Peter Stackpole: Bridging the Bay takes viewers to the 1930s construction sites of the Bay Bridge and Golden Gate Bridge through the lens of photographer Peter Stackpole. The stunning black-and-white prints will be up until January 26, 2014. 510-318-8400 or MuseumCA.org

The UC Berkeley Art Museum and Pacific Film Archive (2626 Bancroft Way, Berkeley) will be presenting a similar package of snapshots from the past this fall, but focused around China. Beginning August 21, Yang Fudong: Estranged Paradise, Works 1993-2013 will provide a midcareer survey of one of China’s most highly acclaimed photographers and cinematographers, famous for his piercingly beautiful 35mm films. The exhibit will present a collection of Fudong’s photographs, films, and multichannel videos, which often disregard sequence and narrative, immersing the viewer through installation. Fudong’s films reflect both traditional Chinese scroll painting and contemporary Chinese consumerist culture, but also poignantly tackle the human experience in a way that is globally relatable. In conjunction with the exhibit, the Pacific Film Archive will be presenting a film series co-curated by Fudong featuring works that have influenced him. BAM is also displaying Gazing Into Nature: Early Chinese Painting and Beauty Revealed: Images of Women in Qing Dynasty Chinese Painting in conjunction with Fudong’s exhibit, highlighting some of the traditional influences that his style reflects. 510-642-0808 or BAMPFA.Berkeley.edu

For decades, Mills College has been at the forefront of the experimental and avant-garde in dance, music, intermedia, and visual arts. The school has nurtured such influential artists as John Cage, Marian Van Tuyl, Laszlo Moholy-Nagy, Darius Milhaud, and Lou Harrison, among others, and now it’s breaking open its archives to present them together in a group show of film, photographs, recordings, and ephemera. Experiments in the Fault Zone at the Mills College Art Museum (5000 MacArthur Blvd., Oakland) will hopefully capture the fearlessness of artistic expression that the school continues to foster today. It runs from September 25 to December 8. 510-430-2164 or MCAM.Mills.edu

The Richmond Art Center (2540 Barrett Ave., Richmond) will be presenting the first major survey of works by Oakland artist Bella Feldman. Feldman was a pioneer among female sculptors, working with a wide range of materials including glass and steel. Her sculptures are clever structural metaphors that command space with their weight and bravado. The survey will also include her smaller series, the playful-yet-political War Toys and the whimsical Flasks of Fiction, along with a collection of her mixed-media collages and oil paintings. Showing from September 14 to November 15, Bella: A 50-Year Survey of the Work of Bella Feldman will be well worth a visit. 510-620-6772 or TheRAC.org

Oakland artist Crystal Morey is concerned about how technology is disconnecting us from nature. Her response comes in the form of personified animal statues and busts inspired by Egyptian sarcophagi and the indigenous people of the Pacific Northwest. Realistically rendered, the ceramic sculptures resemble morose humans in animal suits. The Compound Gallery and Studios (1167 65th St., Oakland) will be presenting a solo show of Morey’s works, entitled Remember the Future, from September 21 until November 3, with an artist talk on the last day of the exhibit. Come back on November 9 for The Art of Letterpress II, a follow-up to last year’s popular print exhibition showcasing the analog art of letterpress in a technological age. It goes through December 15. 510-601-1702 or TheCompoundGallery.com

Japanese artist Mayumi Hamanaka feels that there are personal memories woven into the way that we think about historical events. Her art aims to bring those personal perspectives to the fore by reimagining the past. To do so, she abstracts recognizable imagery from 20th-century wars with layers of ghostly cutouts, forming an intricate texture of emotion and identity. Hamanaka’s work will be exhibited alongside those of Brooks Salzwedel at Johansson Projects (2300 Telegraph Ave., Oakland) in a self-titled two-person show, which will run from November 21 to January 16, 2014. Salzwedel examines the fragility of our environment and our own vulnerability within it via gorgeous graphite drawings of hazy landscapes on mylar and tape cast in resin. Together, they will present a delicate exploration of loss in our environment from natural disaster and human intervention. 510-444-9140 or JohanssonProjects.com

The work of Oakland artist Zarouhie Abdalian tends to resonate through a space, creating a subtle shift in the environment that draws the viewer to that which he or she might otherwise overlook. The 2012 SECA award-winner is currently showing Abdalian’s first solo exhibition, MATRIX 249, in which she uses bells and hammers to warp conventional perceptions of sound and space — at BAM/PFA (through September 29). Beginning September 14, as part of the SFMOMA’s 2012 SECA Art Award showcase, large brass bells installed by Abdalian in and around Frank H. Ogawa Plaza will ring together daily in randomized rhythms. The installation, entitled Occasional Music, plays with the way that “bells regulate the activity of social spaces.” The bells will toll until November 17, so listen up if you’re in the area. SFMOMA.org/SecaAward

Neu Folk Revival at LeQuiVive Gallery (1525 Webster St., Oakland) calls upon notions of traditional art-making by bringing together artists who value working with their hands and connecting them to a lineage of talented crafters reaching far back in history. Guest curated by Max Kauffman, the group show will feature more than thirty well-known and emerging artists focused on visual storytelling and craftsmanship through a variety of styles and media. It runs October 5 to November 2. Until then, the gallery will be showing Making Friends with the Devil (September 6-28) a solo show by Helen Bayly that presents soft drawings in pornographic themes in an attempt to take on the clash between primal attraction and rational aversion. And later, in December, Sugarmill & Bates will feature the ripe and energetic paintings of artist team Conor Hollis and Amorette Lana, who collaborate to form explosions of shape and color that they regard as a profound conversation between them. 510-499-1789 or LeQuiViveGallery.com

The talented Kauffman partially takes up the post-apocalyptic as his subject matter, highlighting its would-be role in an emergent DIY culture in which something beautiful is made out of the few things one has left. Loakal Gallery (560 2nd St., Oakland), which was co-founded by the Express, will be presenting Kauffman’s wild and mesmerizing mixed-media paintings and murals surrounding this theme in Your Vulnerability Makes You Beautiful (September 6-30). In November, a solo show by Oakland painter Peter Adamyan entitled Salvation Mini Mart will provide a satirical social critique of consumerism, government, and religion through provocative combinations of pop-culture imagery in a contemporary pop-art style. 510-550-5107 or EBXLoakal.com

Best Addition to the Berkeley Drunkosphere