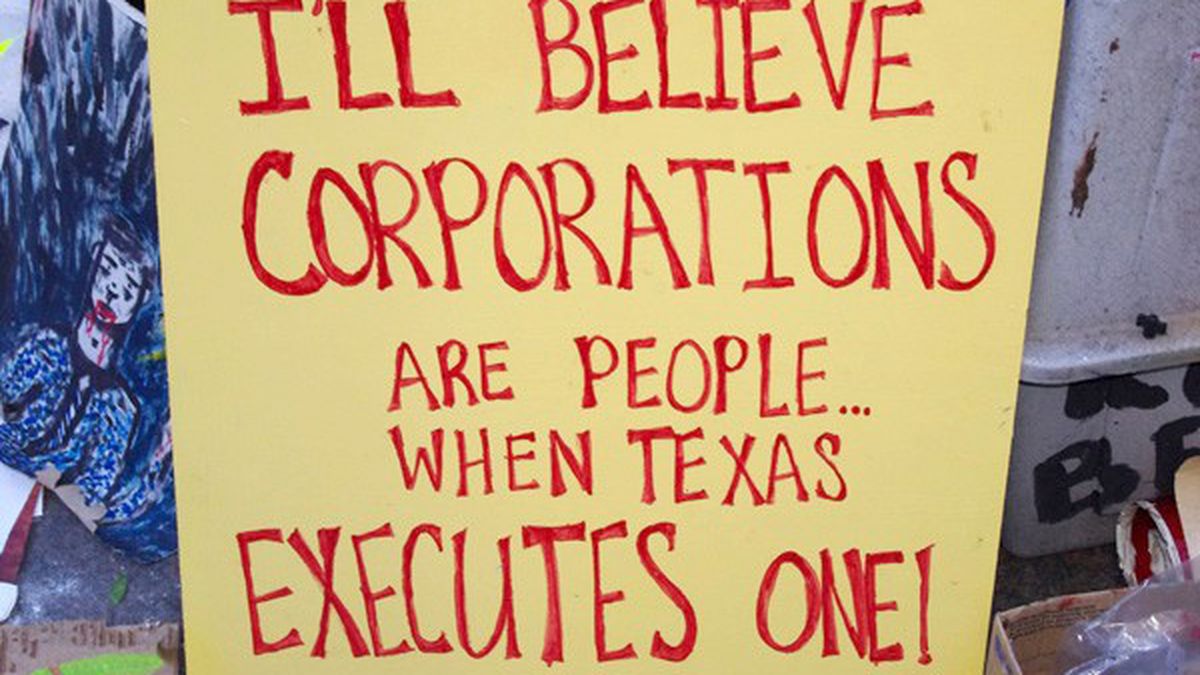 More of the best and worst of an eventful year.

Most Bizarre Argument by Defenders of the Status Quo: “Corporations are people,” except, of course, when they do not want to be. Some folks in the East Bay have been railing against this concept for years. US Senator Bernie Sanders, an independent from Vermont, introduced a constitutional amendment that would overturn the US Supreme Court’s Citizens United ruling, which gave corporations the ability to unfairly influence elections. “Nobody that I know thinks that Exxon Mobil is a person,” he said. Most would agree. And a shout-out to the Los Angeles City Council, which this month voted 11-0 for a declaration that corporations are not entitled to the rights of people.

Best Political Slogan of the Year: “We are the 99 Percent.”

Most Perplexing Common Phrase: “Green jobs.” What the heck is a green job? One that makes something “green”; a job that is sustainable, i.e., has a good wage and benefits; or both?

Biggest Phrasing Misnomer: “Financial expertise.” Governor Jerry Brown recently appointed an investment banker and a lawyer from a firm for the One Percent to the trustee board of CalSTRS, the pension fund for school teachers. If there is one thing we should have learned from the continuing financial crisis, it is that those who claim “financial expertise” are those who got us into this mess in the first place.

Worst Use of Money by the Rich (1): Philanthropy as social policy. As democracy continues to decline, the wealthy use their money to function as an ersatz government. Those sweeties Bill and Melinda Gates, are funding ALEC; the right-wing Koch brothers’ state legislative lobbying group is working to disenfranchise poor and minority voters. Bill and Melinda’s dollars are attempting to get legislation passed to privatize education and to attack teachers’ unions.

Worst Use of Money by the Rich (2): Big oil co-opting environmental organizations. The Nature Conservancy, the Audubon Society, and the Sierra Club accepted large amounts of green-washed money and gave BP access to their environmental work. After the BP Gulf oil spill, like the soiled birds, these organizations have worked to scrub their images. Good luck with that.

Dumbest Political Attack on Workers and the Middle Class (1): The attacks on the US Postal Service. Given the digital divide, if you eliminate the Postal Service, many Americans will lose their ability to effectively communicate with each other. And, like parks and libraries, the Postal Service is an important source of social cohesion. Much of the attack comes from those working to destroy unionized middle-class jobs. Killing the Postal Service is a stupid idea. (Full disclosure: I was a mail carrier for nearly four years.)

Dumbest Political Attack on Workers and the Middle Class (2): Attacks on public workers’ pensions. Many, including local liberals, have fallen for the issue of the “scandal” of public workers pensions. Employing the techniques of using a few bad apples who have abused the pension system to advocate for cutting all pensions (see welfare Cadillacs), unaware supporters of public pension “reform” contribute to growing austerity for the American people. If you want our country to be “Third World,” make sure our elderly cannot support themselves. Joining the attack on public pensions will quickly get us there.

Dumbest Political Attack on Workers and the Middle Class (3): Attacks on publicschool teachers. The problems with schools are economic. Of course we need innovation, but good education is about the amount of meaningful time spent by teachers with students. My sister works as a teacher’s aide in Arkansas and makes less than $25,000 a year. Yet the focus seems to be on greedy teachers who work this crucial and difficult job. Destroying teacher morale; pushing for charter schools, which have proven to be unable to provide their claimed benefits; and privatizing education are sure ways to destroy public schools — and with it, the ability of ordinary Americans to grasp that American dream.

Biggest Coming Crisis: 401(k)s. This way of saving for retirement is touted as a panacea, while old-style, defined-benefit pensions are being decimated. But 401(k)s are wholly inadequate to provide for the task, and the layers of fees and paperwork suck the life out of their ability to play this role.

Most Underutilized Concept: Personal responsibility. Ronald Reagan rode this mantra for many years. And in the 1980s and 1990s, it was used by corporate strategists to weaken legal rights for Americans, especially in the court system. But where is it now for the banksters, their lobbyists, and friendly politicians?

Biggest “Thought” Mistake: Our country and world is in the middle of an “emperor has no clothes” moment. Every one of us has the ability to be the little kid who says the emperor has no clothes, but many good people are unwilling to say what needs to be said because they don’t want to be mean to others. If people make their living protecting the wealth of the elite, like many lawyers, PR people, and lobbyists do, they need to be called out. But the reason these individuals take these jobs is not usually due to bad motives; it is mainly because the jobs pay well. A healthy and productive way to deal with this is to use unbending honesty in assessing the facts, while employing a compassionate attitude toward those who are involved. (A nod to Buddhist philosophy.)

Scariest International Institution: The International Criminal Court. While the US “unsigned” the founding agreement so that it could not apply to US crimes, the court has become a tool for the US and other international elites to use when they do not like some governmental figure. It is mainly an instrument of foreign policy of these elites, subject to no real democratic oversight. Mainly used against African despots, it ignores the criminals responsible for the crimes carried out by the pals of the US and European elites.

Coolest Bay Area Transportation: The ferry from Jack London Square to the SF Ferry Building cannot be beat. You go from one cool place to another and get extraordinary sights along the way. I love riding it and being right next to the giant ocean freighters.

Best Seat at Which to Eat If You Have $$: At Commis, you can sit at the bar and be about two feet from James Syhabout, a culinary magician cooking your food. You can do this at Plum as well.

Best Seat at Which to Eat If You Have Almost No $$: On the curb with your plato from nearly any of our local Mexican food trucks.

Best Seat at Which to Eat If You Have a Little $$: At any of the wonderful local establishments serving meals with local food products. One great thing about restaurants in the East Bay. If they serve bad food, they are “outta here.”

And while I am no expert in many types of culture …

Best TV of 2011: Fashion Police. Joan Rivers is a national treasure; Giuliana Rancic is underrated. And how can you miss the “Bitch Stole My Look” segment?

Best Book I Read in 2011: Blindness by Jose Saramago. It’s nearly fifteen years old, but I read it this year and still think about the book, though I am not sure why.

Song of the Year: “Paper Airplane” by Allison Krauss. If God exists, Krauss is her angel.

Most Fun Celebrity of the Year: Lindsay Lohan. She has been a constant fount of mirth and merriment.

Happy New Year. 2012 is sure to be interesting.