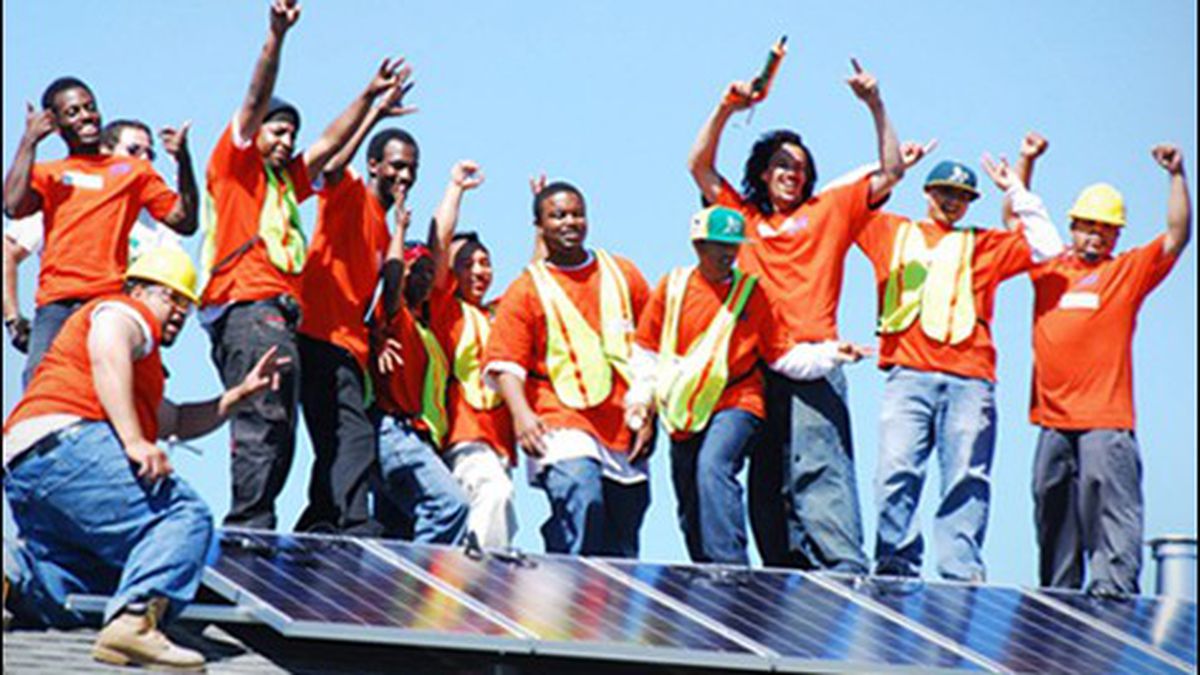 The construction industry collapse has resulted in fewer green jobs than expected as cities scramble to attract eco-friendly employers.

Cities, states, and the federal government have spent billions in the past few years trying to create green jobs and train workers for them. But the foreclosure crisis and the continuing economic downturn have resulted in far fewer green jobs than politicians and environmentalists had hoped. Moreover, many of the jobs available have been snatched up by highly skilled, blue-collar workers sidelined by the housing collapse, leaving less-experienced trainees still unemployed.

These disappointing developments in the green-jobs market, often viewed as the next savior of the California economy, are prompting cities in the East Bay and around the state to scramble to attract eco-friendly employers and help them prosper. At the same time, some local experts are finding hope in a new definition of what is a green job, expanding its meaning beyond simply installing solar panels or weatherizing your home.

A preliminary study published by UC Berkeley researchers in December and funded by the California Public Utilities Commission painted a bleak picture of the state’s green jobs prospects through 2020. The study, “Projecting Future Labor Demand and Supply in Energy Efficiency, Distributed Generation, and Demand Response in the Context of California’s Jobless Recovery,” estimated that the state will produce more than 211,000 new green jobs this decade. The report also noted that there were 14,248 more green jobs in 2010 in California than in 2009. But most of those jobs were grabbed by unemployed construction workers, while recent graduates of the state’s 550-plus green jobs training programs have had trouble even scoring interviews.

“The building and construction industries have been affected by the recession far more than other occupations, with unemployment rates reaching 30 percent,” stated the report, which is scheduled to be finalized next month. “At present, there are a significant number of unemployed and underemployed skilled workers in these industries that employers are likely to draw from before hiring new inexperienced trainees. In all sectors, this pool of unemployed workers is likely to exceed the number of new jobs created at least until 2020.”

Julie Sinai, chair of the East Bay Green Corridor Policy Committee, said the UC Berkeley report reflects the frustration that green job trainees have been experiencing. “Until there’s more job creation, we’re training a lot of people for jobs that don’t exist,” said Sinai, who is also Berkeley Mayor Tom Bates‘ chief of staff. “It’s because a lot of people who do home construction or commercial building construction have transitioned into energy-efficiency work.”

But that’s not to say there are no green jobs at all — just that they’re tough to get. San Mateo-based Solar City currently has dozens of positions available, and plans to double its workforce from 1,000 to 2,000 this year, said Juan Aguayo, director of employee relations. The company’s growth has skyrocketed recently. It now has more than 10,000 residential, commercial, and government customers, and last week moved to new headquarters more than twice as large as its old one. The secret to Solar City’s success appears to be its customer-friendly financing plan that allows cash-strapped property owners to install solar panels without putting any money down. “The lease-option has really sparked a lot of interest for us,” Aguayo explained.

Still, Solar City is being swamped with job applicants — up to three hundred per position. And the pool of prospective employees includes a lot of jobless construction workers who require very little training to become solar-panel installers or energy-efficiency auditors. “We’re getting a big response,” Aguayo said. “There are a lot of people out there who are unemployed.”

Yet even with the wave of construction workers flooding the green jobs market, the East Bay is still home to numerous training programs thanks to the federal stimulus package and state renewable energy funding. Rising Sun Energy Center of Berkeley plans to continue its training program contract with the City of Berkeley for at least another twelve months. It also will hire a small number of those trainees once they’ve graduated. The program also has enjoyed more success than others. About 80 percent of graduates have found full-time, part-time, or temporary work, or have gone onto other training programs, said Elena Foshay, Green Energy Training Services program manager.

An even bigger success story has been Richmond Build, which has placed at least 90 percent of its graduates into jobs paying at least $17 an hour, according to the UC Berkeley study. The Richmond Build program has been bolstered by policies established by the City of Richmond. All construction contracts with the city require that employers set aside 25 percent of project work hours for Richmond residents who have graduated from Richmond Build. Mayor Gayle McLaughlin also noted that Richmond Build grads are currently installing solar panels on city buildings. “The economy is bad and we want to make sure that the graduates keep getting employed,” McLaughlin said. “We certainly think that the ordinance has been a good one.”

Of course, once the housing sector recovers and the economy rebounds, then environmental laws that require more urban infill development and green-building standards will produce more green jobs, noted Ian Kim, director of the green-collar jobs campaign with the Ella Baker Center in Oakland. Kim also pointed out that Governor Jerry Brown has called for 20,000 new megawatts of renewable energy in California by 2020, which, if met, also will be a significant job creator. In addition, the cap-and-trade regulations adopted by the California Air Resources Board last month should boost renewable energy companies in the state.

In November, Berkeley voters also approved a blueprint for a downtown plan that promises to result in more green-job trainees getting work. Under the plan, which is expected to be finalized and adopted by the city council later this year, downtown developers who construct buildings to green standards using local workers will be able to cut through bureaucratic red-tape and get their projects approved quickly. The council will consider a similar proposal as part of its zoning overhaul of West Berkeley later this month.

Berkeley leaders also hope the changes in West Berkeley will transform the city’s once vibrant industrial warehouse zone into a green-jobs mecca. But instead of solar-panel installers, the city hopes to attract spinoffs from Lawrence Berkeley Lab, companies that will create the new eco-friendly technologies of tomorrow. Then once those companies are ready to actually make products, Berkeley hopes to partner with Oakland and Richmond to find manufacturing space within the East Bay Green Corridor, said Berkeley Mayor Bates. “A lot of it’s biotech,” he said. “It’s not exactly green, but it’s close.”

Bates and others also contend that the definition of green jobs is widening. Environmentally conscious companies that are not normally viewed as providing green jobs actually are doing so, they argue. This expanded view, for example, would consider a business, restaurant, or market that sells locally grown, sustainable food to be a “green” business with green jobs. Michael Caplan, Berkeley’s economic development director, says the city considers Annie’s Inc., which manufactures organic and natural packaged foods, to be a green addition to Berkeley. Annie’s recently announced that it’s moving its headquarters into part of the old Clif Bar building in West Berkeley.

Leonard Adler, founder of the Green Jobs Network, sees a world of the future in which numerous everyday jobs, not just ones involving renewable energy, will be considered “green.” Companies that practice a triple bottom line and care about social responsibility in addition to the environment are providing green jobs, too, he argued. “Green doesn’t only mean about the environment,” he said.

Bates also predicts that socially and environmentally conscious companies will flourish in the progressive East Bay, and that over time, the jobs they offer will become accepted as green. “We’re seeing more and more businesses that are starting to realize the advantages, especially in an area where we have people who are willing to pay more for doing the right thing,” he said. “The market is there. It’s about companies adapting to the market.”

And if that happens, then the prospects for green jobs may be rosy after all.