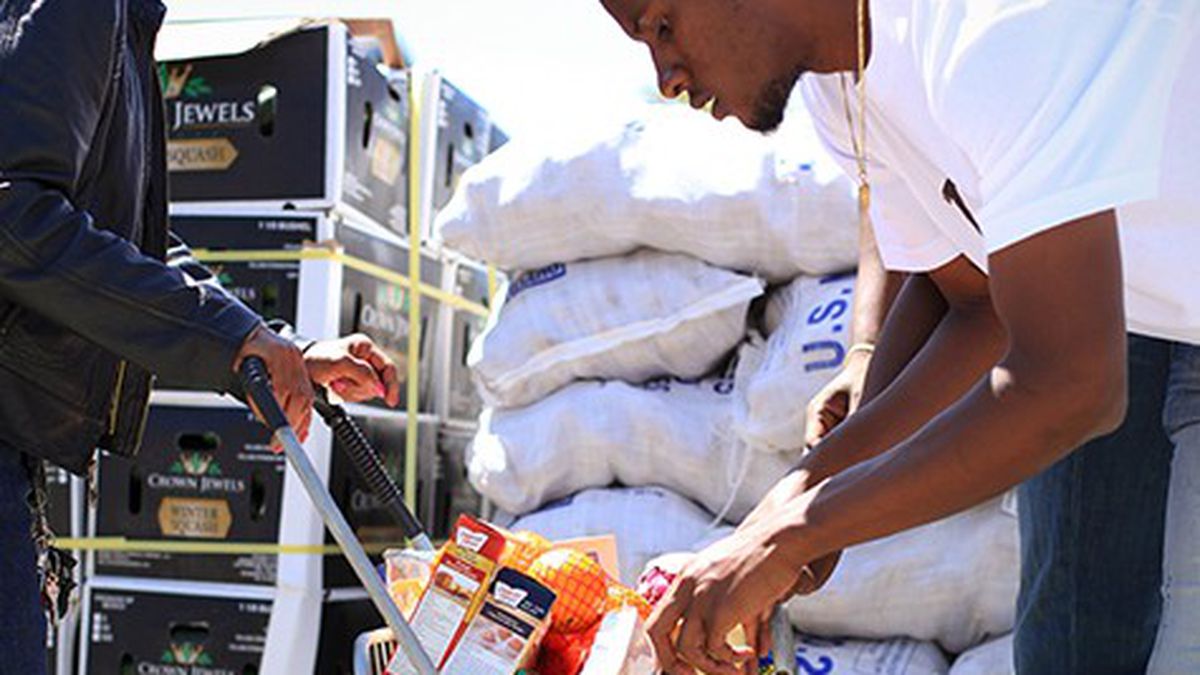 Inspired by the Black Panthers, the artist is organizing various charitable projects to empower those in need in his East Oakland community.

On a recent Thursday afternoon, Oakland rapper Int’l Hay Sús and a group of friends who call themselves The Black Neighborhood joined forces with elders from People’s Baptist Church to set up a shoe and grocery giveaway for the local community. Taking place in the church parking lot on MacArthur Boulevard and 88th Avenue in East Oakland, the event drew neighbors from various walks of life — families, elders, folks struggling with substance-abuse issues and homelessness — who lined up to fill their bags with kitchen essentials and scope out new footwear.

I had heard about the project through social media via mutual friends in the hip-hop scene — which is mostly how The Black Neighborhood project has been gaining traction. Hay Sús already has a considerable platform as a rapper, and by pushing #TheBlackNeighborhood hashtag along with eye-catching photo documentation of the collective’s charitable acts, he’s attracted an eager following of twenty-somethings concerned with social justice.

Hay Sús, a 2015 Howard University graduate who returned home to Oakland about a year ago, has long made music that speaks to issues of systemic inequality that affect the Black community. But after watching The Black Panthers: Vanguard of the Revolution, a PBS documentary that detailed the organization’s community service projects, he decided to look for ways to make a tangible impact beyond the messages in his art.

“After I watched the Black Panther documentary, it really sparked something,” said Hay Sús in a recent interview. “I was writing down different ideas I wanted to do, and everything was coming full circle.”

Hay Sús gathered nine of his closest friends — all of whom are young, Black men, as well — and they started The Black Neighborhood together in February. So far, their projects have included a speaking engagement at a local high school and several initiatives to feed the hungry.

Because many of the core members of The Black Neighborhood are also artists, they’ve contributed their creative skills to helping the project take off. Rapper G Maly, one of the members of Hay Sús’ music collective, True Society Music Group, is a founding member. Ephraim “Dephkhan” Vives, a photographer, painter, and music producer, has lent his visual art skills to the project, documenting the group’s community service endeavors with high-quality photos that have been circulating online. And Royce Hughes, the collective’s event coordinator, is also a graphic designer who created The Black Neighborhood logo, which the group has been wearing on T-shirts and posting on social media.

Creating a clean, cohesive visual identity has certainly helped The Black Neighborhood’s projects attract millennials, and so far, Hay Sús said that many of his peers have asked how they can get involved. However, he’s holding off on adding members to the collective until he creates an organizational structure that would help them efficiently carry out projects.

“People are reaching out to us every day asking, ‘How can I help? How can I be a member?'” he said.

But what’s especially powerful about The Black Neighborhood is that, unlike some youth-oriented activist movements, it bridges an intergenerational gap through its partnership with People’s Baptist Church, creating avenues for youth and elders to work together.

Indeed, the project has even resonated with some former Panthers. Joyce Taylor, one of the first women to join the original Black Panther party, approvingly watched over the grocery giveaway two weeks ago — something Hay Sús recalled excitedly.

Becoming involved in community service has informed Hay Sús as an artist, and right now, he’s recording his next full-length, #HaySúsCares. “I feel like what’s gonna make this project so unique is that I’m gonna capture all sides of Oakland,” he said. “So you have the side that’s that Panther, mob mentality to it. Then there’s the side of Oakland that has that stoner-hippie, chillin’-but-turned-up-at-the-same-time vibe to it. And then it also has that conscious side.”

While the album is in progress, Hay Sús said that he’s also ironing out the logistics of The Black Neighborhood’s next project: A social media challenge that would encourage people to support Black-owned businesses. At a time when gentrification encroaches on low-income areas all over the East Bay, Hay Sús’ social-media-savvy activism is galvanizing young people to act — before it becomes too late.