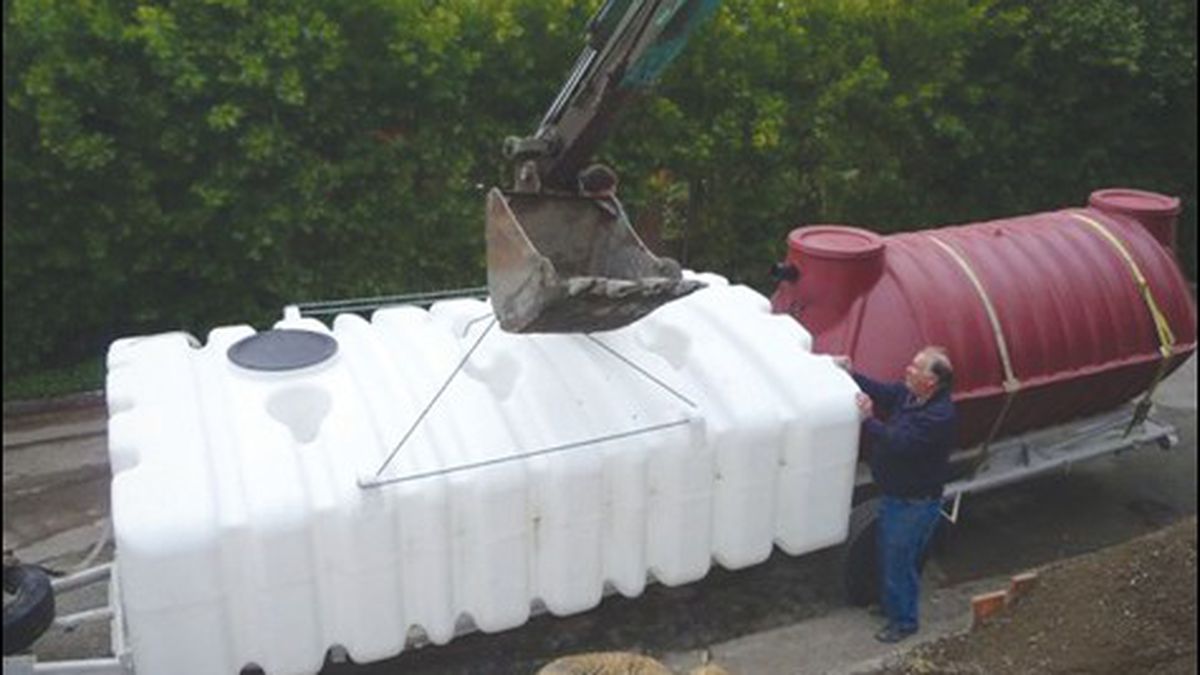 In a sign of what's to come, Berkeley issues its first permit for interior use of rainwater.

In recent years, rain barrels have gone the way of the low-flow toilet: mainstream. Thanks to California’s three-year drought and a critical mass of interest in resource conservation, homeowners can drop $100 for a designer version at just about any local gardening store. They can take their pick from among countless styles at home improvement superstores. Or they can order one of a number of mass-produced kits and simply make their own. But there’s a problem: When restricted to exterior use, rain barrels tend to serve far better as eco-badges of honor than they do actual water-saving devices.

The reason is simple, especially in our climate: When it rains, we don’t need the water. A typical fifty-gallon barrel on a single downspout will fill up in one or two storms. With no place to go, the water sits all winter while subsequent rains drain to the street. Six months later, the landscaping water is finally in demand, but fifty gallons lasts only a short time. Then the barrel sits dry until it refills with the first winter storm, and the cycle repeats. It’s about as inefficient as conservation gets.

There’s a solution, but until recently it’s been illegal. Yet on the heels of statewide legislation last summer that relaxed the guidelines on greywater — which generally involves sending water from indoor sinks, showers, tubs, and washing machines outside for irrigation — municipalities throughout the state are beginning to consider the reverse: piping rainwater into the home.

Earlier this year, the City of Berkeley became one of the first cities in the state — and the first in Alameda County — to officially do so. A new three-bedroom home high on Summit Road in the North Berkeley hills now boasts the city’s first permitted indoor rainwater installation.

“I think it was really important to get indoor use of rainwater through, because of the climate that we live in,” said Roger Rushing, senior green building inspector for the city. He worked closely with Berkeley-based general contractor Jetton Construction and West Oakland-based ecological engineering firm Hyphae Design Laboratory throughout the five-month permitting process. “When they first approached me about this, I said, ‘You are the first, and it’s a worthy cause if you have the patience, but you’re going to have to stick to it.'”

The home’s entirely concealed rainwater catchment and reuse system feeds its three toilets and one washing machine. Rain travels from the roof, through standard gutters and downspouts, and into below-ground piping that encircles the home’s perimeter. From there, gravity sends the water to a 2,500-gallon tank buried under a garden just downhill of the house. A series of pumps then sends the water back uphill, through two filters and a UV sterilizer, and into the house.

Extensive calculations informed the design, from the roof’s square footage and available space on the lot to the number of people who’d be living in the house and how much water they’d need. The tank the builders settled on should be able to reliably supply the house with usable non-potable water for two-thirds of the year. At a cost of about $8,000 and offering projected annual water savings of 12,000 gallons, the setup should pay for itself in ten to twelve years.

The home’s rainwater system is closely integrated with greywater plumbing that serves its extensive landscaping year-round. One of the most interesting points in the chain is the washing machine, which serves as a link between the two systems and establishes a closed loop, inputting treated rainwater and outputting greywater for the yard. It’s the sort of innovative double-dipping that may become essential in future plumbing designs if populations in California and other water-starved Western states are to continue to grow.

Both of the builders had previous experience with rainwater collection. Hyphae has installed four or five similar systems throughout the Bay Area over the past year, including the state’s first permitted interior rainwater system in Contra Costa County last summer. And as a general contractor focused on sustainable and green building, Jetton has installed a number of rainwater catchment systems, “but nothing this sophisticated,” said project manager Jim Williams. “This is great, because it opens the door for everything to follow, in Berkeley and elsewhere.”

But while this was Berkeley’s first residential application, it was not Rushing’s, nor the city’s, first experience with permitting reclaimed rainwater for use in toilets. That honor goes to the David Brower Center, Berkeley’s commercial green-building flagship, which opened last May. It was followed closely by the L.J. Kruse plumbing, heating, and cooling company’s offices in West Berkeley.

Throughout the time that Rushing worked on the permitting process for the Summit Road home, he also was busy drafting a citywide policy for rainwater use. Responding to public demand, he said, his intent was to simplify future permit applications and to educate builders and designers up-front as to what would be expected of them for both interior and exterior applications. The document took a year to complete and is in its final stages now, pending approval from city staff.

Less Is More at Slate Art and Design Gallery

The Express’ Endorsements So Far