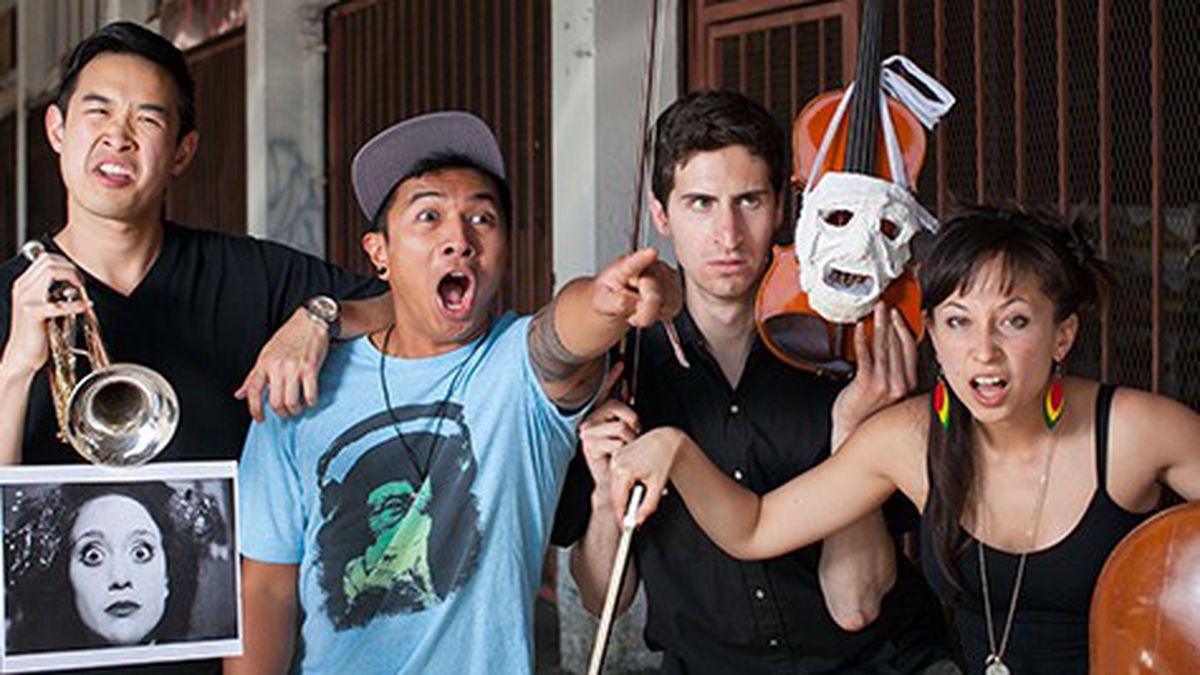 On a recent night at San Francisco’s Viracocha, Eli Wirtschafter wandered on stage with his violin in hand — but did not play it. Marica Petrey, a cellist, also appeared on stage, but didn’t draw her bow. As the crowd grew silent, Wirtschafter made a bizarre sound with his mouth — a rapid tk-tk-tk that resembled a rumbling train, or maybe buzzing insects. In an absurd and surprisingly funny routine, he teased the audience by gearing up to play his violin and instead continuing with his strange noises.

Finally, he played a single note on his violin, before Petrey sang a slow, haunting melody. This was the captivating opening to “Black Rider,” a fifteen-minute original piece from RADIX, an interdisciplinary performance group participating in the progressive, cello-oriented event Cello Madness Congress.

RADIX (pronounced “ray-dix”) — an Oakland-based group led by Petrey, Wirtschafter, and a third performer, Hannah Michahelles — bills itself as “a theater troupe that plays music or a band that makes theater.” But the group makes both descriptions seem too simplistic. Founded in 2013, RADIX boasts a repertoire of a dozen works of various media and genres, all of which are rooted in avant-garde storytelling guided by original musical compositions. Many of RADIX’s works function like plays, but what makes the group’s brand of experimental theater so compelling is that they utilize sound in arresting ways and integrate musical scores into their narratives.

RADIX’s most recent project is The Awakening, a short horror film based on Frankenstein and shot in a former steel foundry in Berkeley, at which the group has done a number of performances. The film — which has no dialogue and stars a thoroughly creepy Dr. Frankenstein giving life to a frightened female creature — features a jarring score composed by Petrey and RADIX member Mogli Maureal, that’s marked by dissonant string melodies, electronic beats, and eerie soprano vocals.

The Awakening from RADIX on Vimeo.

While RADIX’s compositions cover a range of styles, The Awakening score features many core elements of the group’s songwriting — dark and foreboding melodies that carry a kind of mystical character, in part attributable to Petrey’s effortless belting and pure, unaffected vocal quality. The group likes to use grating noises, such as high-pitched screeches elicited from a cello or, as in the short film, a vocal melody repeated in reverse as the drama of the narrative intensifies.

Some of RADIX’s works are loose adaptations of existing short stories or poems, drawing on a variety of traditions and cultures. The “Black Rider” piece the group performed at Viracocha is based on a disturbing German folktale in which a young man accidentally shoots and kills his lover. In RADIX’s version, a trumpet player’s melodies represent the man’s emotional anguish — and gunshots.

“The sound can tell the story,” said Wirtschafter, who, like Petrey, is a recent UC Berkeley graduate. “We think about sound as a weapon — sound as a force.” Michahelles — whose background is not in music, but rather in burlesque and theater centered on social justice issues — added: “With the music and the soundscape, we are creating worlds not only visually, but acoustically. … Sound is totally another character.”

In a RADIX piece inspired by a Jonathan Safran Foer poem, for example, the group eliminated the text altogether, relying instead on violin, cello, and a range of instruments along with physical movement to convey an emotionally charged narrative. “You could hear the conflict and you could see it,” Petrey said. “You didn’t necessarily need the words.”

Petrey, who is also a cellist and vocalist in the Oakland-based band MAD NOISE, founded RADIX after she returned from studying abroad in Russia in 2012. Motivated by the discipline of theater actors overseas — where, she said, troupes sometimes toil over a single piece for years — she wanted to explore music and drama in the Bay Area in a way that wasn’t constrained by typical rehearsal processes, pre-written scripts and scores, or a director’s vision. Often through collective improvisation, RADIX sometimes spends months composing works collaboratively.

Ultimately, though RADIX’s members have such different artistic backgrounds, Michahelles said they have been united in their desire to push the boundaries of performance art and think creatively about the role of music and sound in storytelling. “We’re not afraid to make really bizarre and weird choices.” As a result, she said, “You’re swept up and taken into another world.”