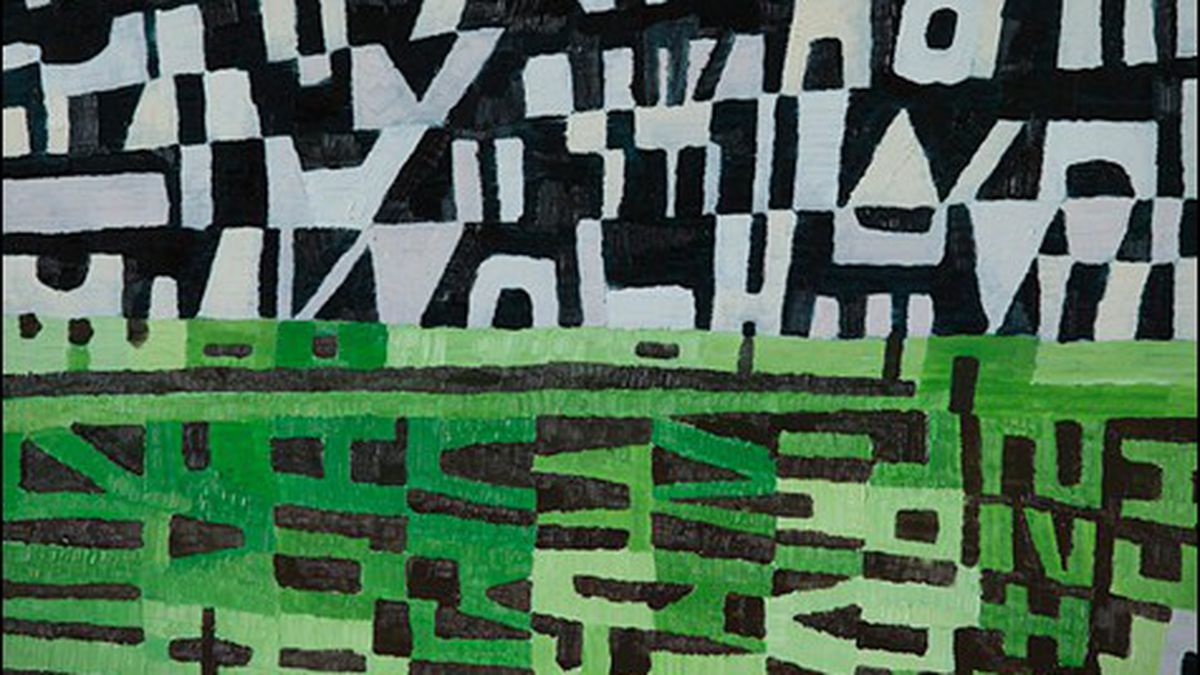 This is not to say that Kaye’s markings and divisions come off as haphazard. To the contrary, the artist places her work more in the tradition of Piet Mondrian than, say, Jackson Pollock. Her visually noisy canvases certainly pack a whole lot more shebam! than the Dutch painter’s austere primary color windows, but nevertheless their compositional distributions read as similarly intentional.

Oh, and if that’s leopard print you think you’ve spotted, you’re probably right. Kaye’s works all begin as collages of textiles cropped from the pages of contemporary fashion magazines that she then transcribes into oil paint or colored pencil. This further explains the paintings’ stark compositional qualities. It also reveals the intermediating aesthetic dimension that makes for a slower burn than, say, the stunning immediacy of Watson’s wreaths, but ultimately a hotter one.

Kaye speaks of her collage work as a practice of “working through” found images: simplifying them, distorting them, fragmenting them and expanding them to arrive at a medium-scale abstract painting from what might have begun as small as a two-by-two-inch juxtaposition of patterned fabrics. In doing so she gets all the benefits of a direct reference — an ever-endlessly inexhaustible one at that, which is always a good quality for a muse to have — while preserving the abstract character of her work. “At the end of the day my work is more about painting than it is about collage or fashion; fashion just happens to be the vehicle by which I find inspiration,” Kaye said.

To be sure, it’s a vehicle with manifold special features. For example, it allows Kaye to enter a conversation with notable abstract painters — a duty that no contemporary painter could avoid — with a unique buffer. She references Ed Ruscha by way of letter-print garments (currently in vogue, she told me), Yayoi Kusama and Vincent Van Gogh via their graphic incarnations in the recent fashion lines of Comme des Garçons and Rodarte, respectively. In joining the cyclical conversation that occurs between art and fashion, Kaye evades the burden that canonized artistic predecessors have a tendency to impose when invoked directly.

Kaye has been pleased with, but humble about, her practice so far. “When I say it out loud it sounds like such a simple project, but it’s never-ending,” she said. “And I want to make them bigger. My work has always been small; [the works in this show] are the biggest paintings I’ve ever made.” You’re on a good track, Ms. Kaye. Go big.

Oakland Metro Operahouse Claims Harassment by a Neighbor, Who Says the...