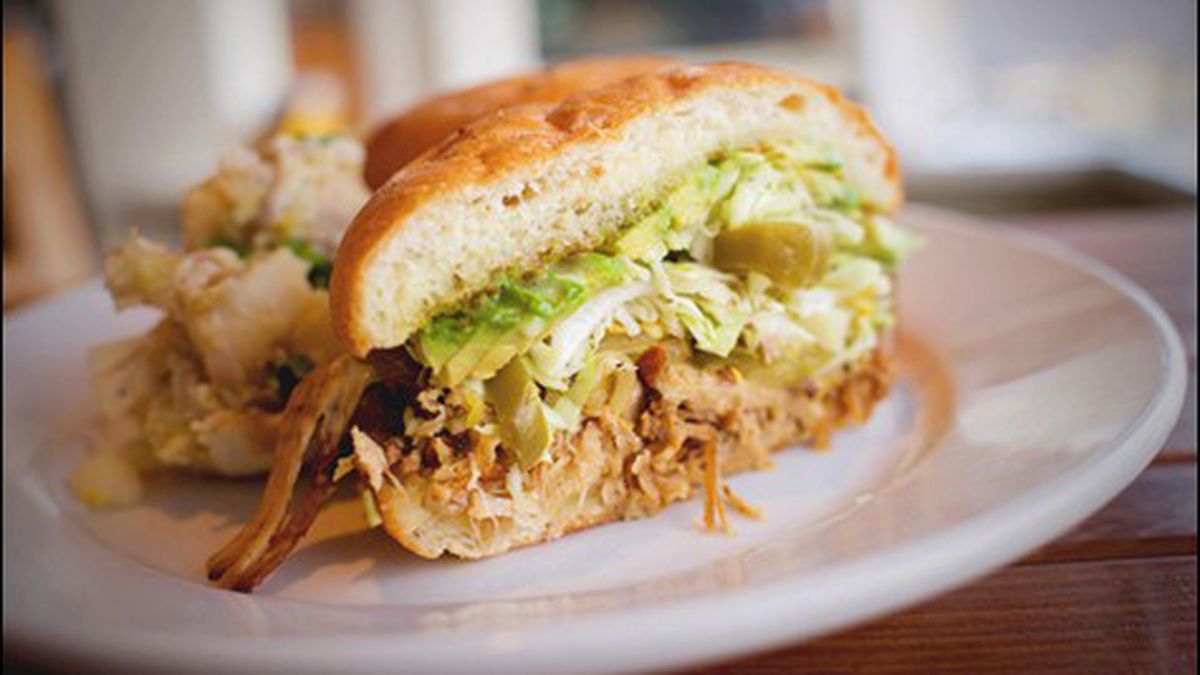 In the Bay Area dining scene, there’s a well-worn formula for success: Take familiar dishes and prepare them simply, using the best ingredients the bountiful bread-basket that is our backyard can supply.

This philosophy lends itself especially well to the stodgy American comfort foods that chain restaurants and greasy spoons have long given a bad rap. How else to explain so many reinterpretations of the cheeseburger — and an entire restaurant dedicated to mac and cheese?

Of course, the banner of Good Local Ingredients can sometimes feel like so much PR babble. In the hands of a lesser chef, you end up with meatloaf that, the name of the farm from whence the pig originated notwithstanding, tastes like a pale shadow of grandma’s — and lo and behold you’ve shelled out twenty bucks for it.

In the best case-scenario, you end up with something like Alameda’s Cafe Q: an unpretentious order-at-the-counter spot that serves the kind of soulful, home-style comfort food that you don’t have time to cook at home — including meatloaf that my wife, a meatloaf enthusiast, declared some of the best she’s ever had.

The cafe opened in January, a joint venture by brother-sister team Minh and Thu-huong Nguyen, who dreamed of opening an eco-friendly, community-oriented coffee shop. But Minh, the cafe’s mild-mannered general manager, quickly realized that what the community really wanted, in addition to all that, was a bona fide restaurant.

Enter Jesse Branstetter, a chef who garnered quite a following in Oakland as a founding partner at Chop Bar who then had short-lived, but highly lauded, stints at 1015 Clay (now shuttered) and the concert venue Vitus (now homeless). Once Branstetter became the chef at Cafe Q in July, he spruced up the sandwich- and salad-heavy menu, launched dinner service, and — in short — made the place a worthy dining destination.

It marks a change of scenery for Branstetter, whose last gig saw him dishing out sandwiches inside a huge, dimly lit rock club. Cafe Q is cozy as can be, especially the main dining area in back, which boasts plentiful sunlight, jazz on the speakers, and fresh carnations on every table. During one visit, I overheard members of a local book club discussing obscure contemporaries of the Sherlock Holmes novels for a couple languorous hours. On another occasion, half the dining room was bedecked with birthday balloons for a child’s party.

But about that meatloaf: Nothing could be quainter, or more solidly rooted in the American comfort-food tradition. Branstetter’s version (available for dinner only) is made with dark ground-turkey spiked with chunks of roasted poblano pepper — a take on albondigas (Mexican meatballs), except molded into a loaf and served in thick slices rather than in a soup. There’s nothing flashy here — the dish doesn’t veer far from its humble, rustic roots. But there is enough of a twist, and enough smoky heat, to make it linger in your memory.

The approach is characteristic of many of Branstetter’s best dishes: Brighten up an American classic by incorporating a hint of Latin flavor. In some instances, he’ll elevate the whole thing with the precise, labor-intensive cooking techniques of the French.

Such is the case with Cafe Q’s tour de force, a pulled-pork sandwich that bears no resemblance to the kind of saucy barbecue you might expect. Instead, boneless pork butt is submerged in rendered bacon fat and then roasted for four or five hours, confit-style, until the meat is both tender and crispy and has taken on all the savoriness and smokiness of the bacon. The end product evokes Mexican carnitas more than anything, the entire sandwich working as a kind of elegant take on a torta. The meat — so delicious — is given center stage, complemented only by a smear of house-made mayo, some sliced avocado, and a light cabbage slaw.

At Cafe Q, dish after dish likewise defied our expectations. Among the dinner entrées, perfectly cooked baby-back ribs (also not barbecue) were slowly braised in orange juice and white wine that — when reduced along with the meat drippings — formed an unctuous, barely sweet, wonderfully porky sauce. The seasonal soup of the day, a corn soup, was a far cry from the kind of thick chowder many of us grew up eating out of a can. Instead: a clear broth fragrant with kernels of sweet summer corn, thick slices of mellow garlic, and the distinctive (but mild) heat of Hatch chilies.

Even the little side dishes — so often a throwaway — demonstrated that same light touch and sense of restraint. The potato salad was a hefty, mustardy version with crunchy bits of celery and fennel. The pasta salad was like something I’d make at home, barely dressed at all — just a hint of olive oil — with flecks of cooked red pepper. Neither had that overly harsh, vinegary quality you find at far too many delis.

Over the course of three visits, there were only a couple of missteps: an inedibly salty and thick-skinned dill pickle that came with my lunchtime sandwich order, and a side of fresh-cut French fries that were hard and shriveled-looking — a telltale sign they’d been over-fried. But these seemed like anomalies, the kind of errors I imagine would be quickly corrected under Branstetter’s watchful eye, and forgivable, too, considering how reasonable the prices are: probably several dollars lower than if the restaurant were located in, say, one of Oakland’s hipper neighborhoods.

One last word: Don’t leave Cafe Q without trying whatever the day’s dessert special happens to be. The strawberry shortcake was another pleasant surprise — not a shortcake at all, but a dainty-looking tower of tiered cake layers, with cream and berries sandwiched in between. And I loved the caramelized edges and the flavor of roasted strawberries in a bread pudding that was neither too soft and custardy nor too hard and dry. It was, as Goldilocks would say, just right.

When You Can’t Understand Your Doctor

Coffee, Doughnuts, and Lifting Up the Young Women of Oakland