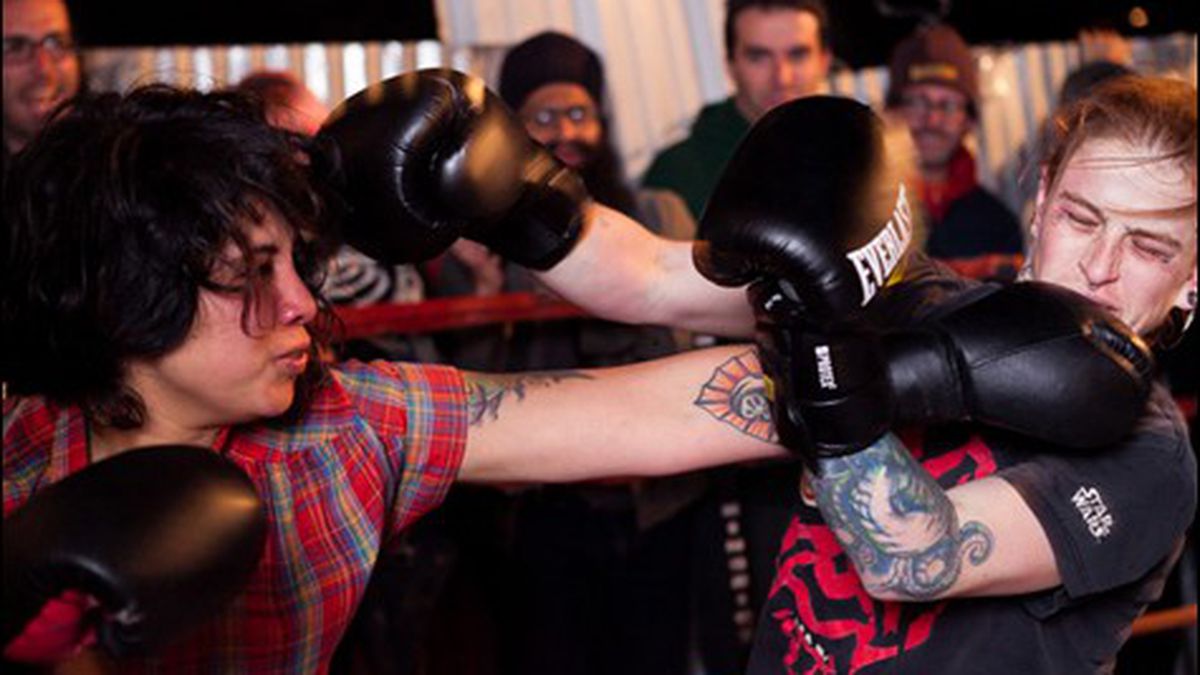 Punks Versus Hipsters: The Battle Royale

How the East Bay Rats got two Oakland subcultures into the boxing ring.

Not everyone will cotton to the idea of a fight club in West Oakland — particularly one overseen by the East Bay Rats motorcycle club. For those who do, however, it’s a minor obsession. When Vice magazine co-founder Gavin McInnes got wind of the fights, he made them the centerpiece of his Current TV pilot, The Immersionist, which was all about “demystifying” strange subcultures. An SFist blogger described the Rats’ fight night as “a three-ring circus of awesomeness.” Clips of Rat brawls abound on YouTube, showing chick fights, emo-boy fights, big-scary-dude fights, fights with underlying sexual tension, two-on-two fights, fights done barefoot, fights that involve more air-swatting than physical contact, fights that elicit jeers from the crowd. If these clips tell us anything, it’s that we love watching a little blood sport — particularly between two opponents who don’t exactly know what they’re doing.

Local promoter Billy Joe Agan picked up on that right away, as soon as he heard about the fight parties. “There’s been all this weird interest from guys who write about culture,” Agan said. “They just gravitate to the East Bay Rats.” He paused a moment to cogitate.

The Rats are, indeed, a weird bastion of traditional working-class machismo, right in the middle of progressive, hipster Oakland. They offer a chance for willowy hipster dudes to get in touch with their essential dude-ness, which might explain why Rats founder Trevor Latham has such an easy time convincing people to put on boxing gloves. Agan thinks of the Rats as Oakland’s answer to The Dukes of Hazzard. “They’re a motorcycle club, but they’re cool guys,” he said. “Not knucklehead racist dudes.”

Thus, the East Bay Rats have a way of attracting people who might not otherwise kick it with bikers. Which explains the startlingly large crowd at Saturday’s fight, which was billed as a battle royale between two of the city’s biggest subcultures: punks and hipsters. For whatever reason, that’s a cause that Oakland can rally behind, said Latham, who conceived the idea in a conversation with Agan. He added that the club packed in roughly five hundred people that night.

The fight started at 9 p.m., and at 11 p.m. a line still trailed down the block of San Pablo Avenue at 30th Street, where the iconic motorcycle club is located. Inside, the throng was mosh-pit thick. The air reeked of cigarettes, cheap beer, sweat, and unidentifiable bacterial smells. Many patrons watched the fight via live video, projected on a wall behind the bar. Someone in the crowd compared it with horse racing and said we should be placing bets. A woman complained about the whole experience being “profoundly unpleasant.”

And yet we took a borderline-prurient interest in watching amateurs attempt to beat the crap out of each other — mostly ineffectively. Agan and Latham had engineered several matches ahead of time. They chose a cast of prominent local punks and hipsters, many of them associated with the Ruby Room bar, which Latham now owns. The participants were equipped with boxing gloves and mouth guards, which wasn’t enough protection to prevent a few bloody noses and swollen appendages. Nonetheless, any fighter was allowed to bail at any time. In fact, Latham explained, fights at the East Bay Rats club don’t have rounds the way normal boxing matches do. And the object isn’t for one opponent to knock the other out. Rather, they end when someone surrenders. Sometimes, that happens within sixty seconds.

“Yeah, I’m a pussy,” admitted Zachariah Keiler-Bradshaw, who bailed after a few minutes in the ring, then went outside and threw up. He said he’d downed three beers and smoked a lot of weed before the fight, if only to help narcotize his fears. That might have given his opponent, Evan Haase, an edge, he surmised.

Latham and Agan didn’t tell people what side they were playing for, given the sensitivity of the issue. (After all, hipsters don’t like being called hipsters.) But in most cases it was obvious, if only by virtue of the visual cues. Pink sweatshirt? Hipster. North Face jacket? Hipster. Mustache? Punk. No matter how slippery the delineations, it was still a beautiful thing — like two prominent Oakland gangs holding hands and singing a happy kumbaya.

Only recently did Latham really embrace the idea of having different scenes fight each other. He’s been hosting fight clubs since 1996, starting in the East Bay Rats’ old West Oakland warehouse, where they used to put couches together to make a ring. Back then, the fights erred more on the gladiatorial side, Latham, said, explaining the idea was usually to make the other person submit by choking them. He called it “grappling.” Later, they set up a rinky-dink wooden ring before finally buying a real one from a local gym. The first fights were all Rats versus other Rats, done in the style of a traditional “smoker” (or underground boxing show). Eventually, they got more creative. “We did a five-on-five battle of drunks versus stoners,” Latham recalled, adding that the participants didn’t have to be drunk or stoned to participate — thought most of them were, by happenstance. (Predictably, the drunks won.) They also held a Jews versus Gentiles match to decide whether the Rats would have a Christmas or a Hanukkah party (the Jews prevailed).

Punks versus hipsters was the most successful theme night to date. And since then, the Rats have compiled a list of potential future themes: Property owners versus graffiti artists. Librarians versus the illiterate. Clowns versus mimes. Cutters versus bulimics. Pill-poppers versus huffers. The college-educated versus high school drop-outs. Female-to-male transsexuals versus male-to-female transsexuals. Transplants verses locals.

Such built-in tensions help generate interest. But, in reality, the fights are popular on their own. Latham said the club’s biggest smoker attracted about 3,000 people. Saturday’s fight might have ranked up there, had they not turned people away. Everyone and their mom seemed to want to fight. Punks fought punks. Hipsters fought hipsters. Chicks fought other chicks. City Hall gadfly Max Allstadt fought Hoodstock organizer Miguel Reyes. After winning the fight, Allstadt posted photos on Facebook of his bloodied face, with the caption, “I have discovered a great preemptive hangover cure. It’s called ‘being hit in the face a lot.’ You should try it! I’m going to make millions.” A forty-year-old punk rocker named Lache, who entered the ring for the first time in her life on Saturday, tried to explain the fight’s appeal. “I volunteered … and I would do it again,” she assured. “But I would want to be put with someone who hadn’t fought before.” Lache got paired with another tough punk chick who had more experience in the ring. Their fight lasted just over a minute — Lache was the one who backed out. Allstadt consoled her: “You threw a few damn good punches, that’s for sure.”

Update: The original version of this article described Miguel Reyes as a “career anarchist.” He is not.