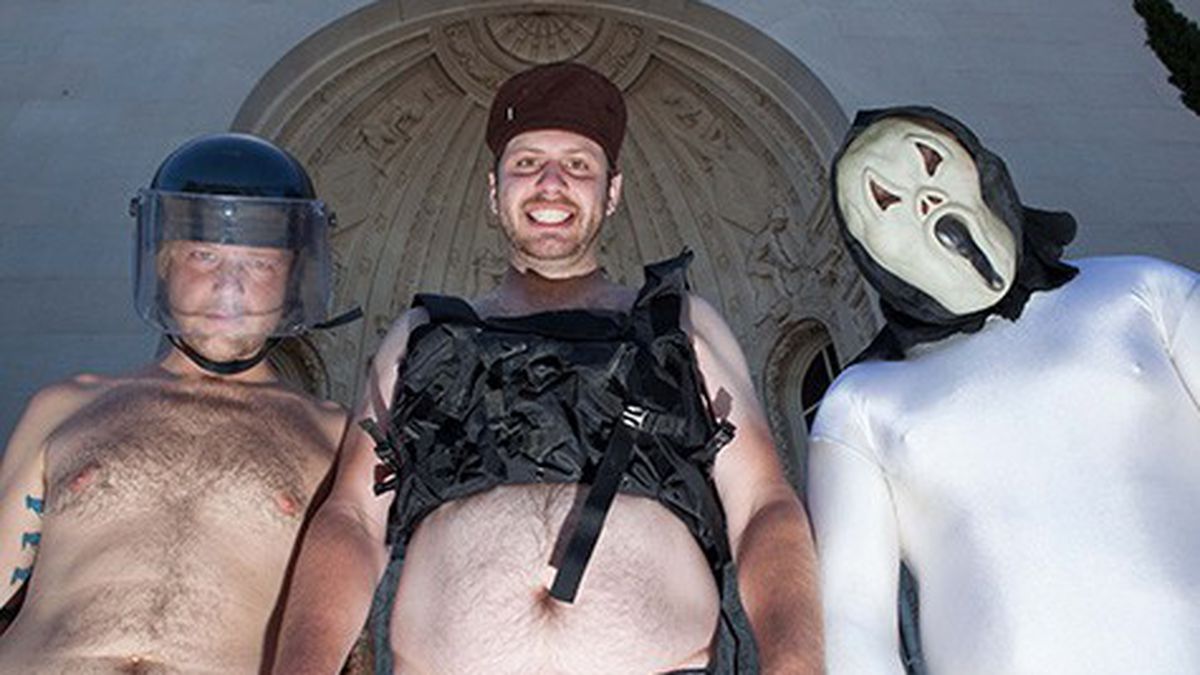 The last time I saw Diesel Dudes play a show I left covered in sweat that didn’t belong to me. It came from Doug DuFresne, who fronts the electro-punk band as LORD NEWT. He wore his typical ensemble: tighty-whities, a motorcycle helmet, and a leather vest. His hulking, sweat-drenched body charging through the crowd, DuFresne vigorously screamed into faces that screamed back. Behind him, Patrick Tabor, who goes by KING TOAD, manned the drums in a dirtied, off-white unitard, periodically abandoning his stoic stance to lift a massive barbell over his head and command audience members to drop and give him twenty. To his right, Shaun Wagner, aka SNAKEMAN, played more drums while wrapped in caution tape, wearing the band’s signature heavyweight gimp mask. A laptop, treacherously balanced on the side of the stage, played adrenaline-inducing beats, slowly collecting moisture until it shut off. But the band played on, climactically drowning a guitar in beer and setting it aflame.

Everything about Diesel Dudes exudes an absurd level of intensity. Their self-defined genre on Bandcamp is “UNDERPRODUCED SWEATY, HYPER ROMAN ELECTRO PUNK FOR YOU TO HEAR WHILE YOUR BODY IS GROWING STRONGER.” That’s fair. But it’s contextually helpful to place them within Electronic Body Music, or E.B.M., which nowadays signals a fusion of industrial and synthpunk conventions. The mostly European-made music is mosh-worthy but also danceable — especially if your dance of choice involves thrusting.

The “body” element is crucial for Diesel Dudes. The Oakland group’s signature is songs about pumping iron, going to the gym, and other tropes of masculinity. “BODY CLENCH,” arguably their most popular song on their last release, 2013’s BORN BRUTE, begins with DuFresne saying, I head to the gym/Already sweaty/Body toned and mind ready, then leads into him yelling, Body clench!/Flex your muscles!, atop a propulsive, energizing beat. Other titles on the album include “PITBULL,” “THRUSTS PER MINUTE” and “WRESTLING TEAM.” (Diesel Dudes are committed to capitalization.)

The idea of exaggerating masculinity to the point of parody is pretty interesting, especially in a punk setting, but it’s not necessarily enduring as the basis for a band’s appeal. What’s more entertaining about Diesel Dudes is the band’s specific permutations on the idea, which morph manliness into a grotesque portrait of an agro euro-bro overcompensating for an unhealthy father/son relationship. Most crucial, though, is the band’s unwavering execution. Diesel Dudes performs so sincerely that their hyperbolic style barely registers as satire. (It’s difficult to be tongue-in-cheek when you’re screaming into someone’s face.) They’re more of an unrelenting celebration of manliness, eluding self-awareness through sheer energy and volume — and they’re more enjoyable because of it. Plus, although the lyrics are silly, the compositions are quality.

When I asked the band to meet for an interview, they insisted on doing it over email. Despite my protests, DuFresne politely responded that writing would be preferred. Begrudgingly, I sent them a series of questions that ranged in tone, unsure whether they would respond in seriousness or not. About an hour later, a cellphone video was uploaded to the Diesel Dudes Facebook page with the caption “DIESEL DUDES INTERVIEW.” That was my answer. With cringe-inducing close-ups of DuFresne’s face, the four-minute video droned on, slowed down to the point of eerie incomprehensibility. After speeding it up 400 percent, I unveiled a distorted message from Diesel Dudes about not doing interviews like everyone else because they want to show Oakland “what’s what,” and “what it’s really all about.” I eagerly anticipated some kind of revelation, but it never came.

Two days later, I finally received the responses to my questions: a document covered in bold, capitalized lettering forming statements with no punctuation — an alt-lit type of poetry with a tough guy sensibility. (Plus, a subdued note added at the bottom about an upcoming West Coast tour, and new material coming soon.) When asked about their sound, they responded, “IT IS LIKE WHEN A GIANT BOULDER TUMBLES DOWN A DARK MOUNTAIN AND DOLPH LUNDGREN IS LIFTING SOME HUGE WEIGHTS RIGHT NEXT TO BOULDER ROLLING AND A DUMPTRUCK SCREAMING LIKE A HUMAN MAN AND A CRANE WITH A MUSCLE ARM MAKING TIMPANI DRUM NOISE INSTEAD THE MOTOR MUSCLE.” I asked them who they were and how they got that way, to which they respond simply: “BAD DREAMS EMPTY POOL BIG COCKROACH.” And when asked if they always acted the way they do on stage, they said, “OF COURSE.”

Best Gawk at the Past: Remember: Thou shalt not covet old...