.Private Cops on the Public Dime

Oakland taxpayers' money is being funneled to an anti-union company that employs private cops to patrol the downtown and uptown areas and influences OPD policies. 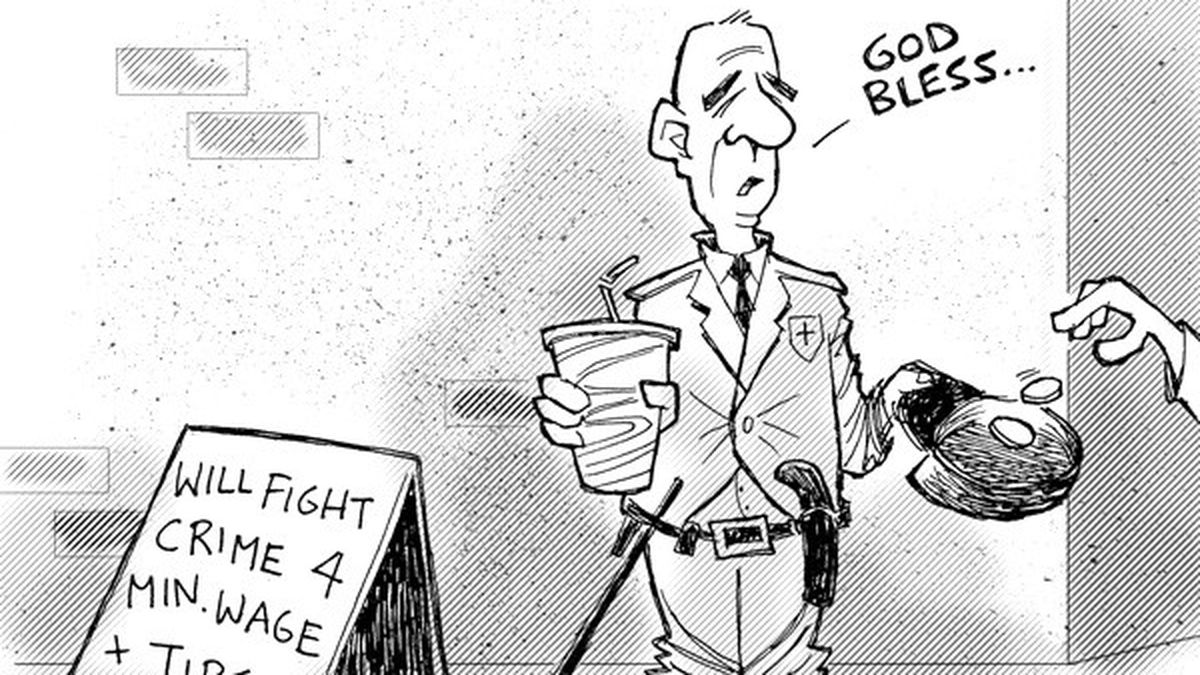 Even as Oakland prepares to lay off more than one hundred city employees, the city will continue paying several hundred thousand dollars each year in taxpayer funds to two privately controlled — and politically influential — organizations that manage the downtown and Uptown areas, records show. Much of this public money, in turn, will be funneled to a powerful, private, Christian-based corporation that has a record of opposing unions. This company, Block by Block, a subsidiary of the Nashville-headquartered SMS Holdings, employs low-paid, private cops, known as “security ambassadors,” and has been influencing Oakland law enforcement policies and procedures in the downtown area.

The City of Oakland’s contributions of taxpayer dollars to the Downtown Oakland Association and Lake Merritt/Uptown District Association — both known as business improvement districts — represent significant financial commitments for the cash-strapped city. This year, Oakland taxpayers must provide the Downtown Association with $109,904 because of assessments the association has levied on five city-owned properties in its boundaries, including City Hall. That’s right: Oakland taxpayers must pay taxes on their primary municipal building to a private entity. Unlike other taxes, public properties are not exempt from business district assessments.

Adding further costs to the city is the elimination of the Oakland Redevelopment Agency. It means that the city is now on the hook to pay assessments for four former Redevelopment Agency-owned properties in the downtown association’s boundaries — costing the city more than $30,000 a year. According to the Downtown Association’s own records, the largest single contributor to the district’s budget is not a private landlord but rather the City of Oakland, which pays about 14 percent of the total.

The city is paying the Lake Merritt/Uptown District Association another $52,068 in public funds this year, and is the sixth largest funder of the district. When the city council green-lighted the creation of the Downtown and Uptown associations four years ago, staff members of the city’s Community Economic Development Agency pegged the city’s fiscal commitments over the ten-year lifespan of each district at $1.58 million and $566,000, respectively.

Staff characterized these obligations of public dollars as a “strategic and productive investment of public funds.” But what are these funds helping to pay for?

According to the Downtown and Uptown association’s own documents, Block by Block’s contract is one of the largest single expenditures for the business districts. According to the associations’ joint 2009-2010 Annual Report to the city council, “Block by Block receives approximately $60,000 per month from both organizations.” That’s roughly $720,000 per year.

So what is Block by Block? SMS Holdings, the parent company of Block by Block, began in 1988 as a janitorial services company in Nashville, Tennessee. In the late 2000s, SMS went on a growth spurt, buying up security companies. Among these was Block by Block, a Louisville, Kentucky firm that controls a large share of the national market for “security ambassadors” and cleaning services provided to business improvement districts. By 2008, SMS posted revenues topping $300 million, and its vice president predicted then that it would surpass a half-billion by 2011.

A document entitled “The SMS Holdings Way,” available on the company’s website, reveals the Christian beliefs of its owners and executives: “From our company’s beginning, our business philosophy has been God-centered and faith-based. While we will always show tolerance and acceptance of the personal beliefs of others, we recognize that there is a higher order that provides a basis for all of our core values.”

It’s unclear just how deeply the Christian core values of SMS Holdings’ owners and executives shape company policy, but in another area, the results are much clearer. Subsidiaries of SMS Holdings, like Block by Block, maintain relatively low-wage, anti-union workplaces. SMS has been very aggressive over the past decade in lobbying federal legislators to privatize thousands of government jobs. Paying minimum wage-levels (and, in some workplaces, even less), SMS Holdings has been able to skim enormous profit margins off of outsourced local and federal government jobs.

An example of the company’s anti-union policies took place in Pittsburgh when Block by Block’s security ambassadors attempted to unionize through the SEIU in 2009. Block by Block managers opposed the simpler card check process, pressing instead for a secret ballot election, a procedure that gives employers more tools to scuttle pro-union outcomes. Block by Block management barred employees from wearing union buttons or talking to the media, and, according to reports in the Pittsburgh Gazette, even conducted surveillance and called the police on some of their own ambassadors who passed out pro-union literature in front of the Pittsburgh Downtown Partnership’s offices.

Block by Block appears to be a relatively small, if growing, segment of SMS Holdings. The company’s bigger and more profitable ventures in recent years are private security and aviation service workers whose ranks were greatly expanded with the creation of the Department of Homeland Security, and then privatized en masse by the Bush administration.

The SMS Holdings subsidiary PrimeFlight specializes in providing service workers to airports and airlines. At the George Bush Intercontinental Airport in Houston, where PrimeFlight workers drive passengers through terminals, company managers have pressured their less-than-minimum-wage employees to over-report tips in order to qualify SMS Holdings for lucrative state subsidies, and to justify extremely low wages. The Houston Chronicle reported on November 1, 2011 that PrimeFlight’s participation in a state subsidization program had been suspended, and that the company is being investigated for violating labor laws.

The most profitable anti-union activities of SMS Holdings have been directed at workers employed by its FirstLine Transportation Security subsidiary. FirstLine contracts with the Department of Homeland Security to provide airport security screeners at eight locations nationwide.

SMS Holdings’ ability to combat the unionization of its workforce has been greatly enhanced by the political ties the company’s executives have cultivated since the early 2000s. According to Federal Elections Commission data, executives of SMS Holdings contributed more than $100,000 to the campaigns of congressional representatives since 2003. Much of this money was funneled through the FirstLine Transportation Security PAC to select members of Congress whose powerful committee appointments gave them control over lucrative TSA contracts. Among those who benefitted from SMS Holdings contributions were Republican House members John Mica of Florida and Dan Lungren of California. Mica is the current Chairman of the House Transportation and Infrastructure Committee, while Lungren holds a seat on the House Subcommittee on Transportation Security. In the Senate, Republicans John Thune and Jim DeMint, members of the Aviation Operations, Safety, and Security Subcommittee, have been recipients of FirstLine PAC money and contributions directly from SMS Holdings’ executives. These political connections continue to work for FirstLine and SMS Holdings. As recently as November of 2011, Mica was arguing for privatizing all TSA screening jobs.

But it’s not just SMS Holdings’ labor policies that raise concerns. In Oakland, business improvement district staffers, with much assistance from Block by Block’s local operations manager Ted Tarver, have been influencing OPD policies. From the start, both the Downtown and Uptown associations have organized meetings with OPD and City Hall leaders in an attempt to integrate the districts’ private security guards with OPD. Many OPD officers, however, have been resistant to working with Block by Block’s ambassadors.

Even so, some OPD commanders have shown much deference to the associations and their agenda. Oakland Police Captain Anthony Toribio told the Downtown Association board in December 2009 that the department supports joint patrols of OPD officers and Block by Block security, and that these private cops could act as a “force multiplier,” according to minutes of the meeting. In another meeting, Captain Toribio told the Uptown Association board that he wanted the district’s private security to “share intelligence” with OPD.

In the same board meeting, Ted Tarver of Block By Block and Captain Toribio discussed ways to discipline OPD officers who continued to resist integration with Block by Block’s security force: “Officers that do not like them and are resistant to work with them will be held accountable,” read the minutes from the board meeting. Captain Toribio recommended that Block by Block security staff “record the car or badge number” of cops who refuse to cooperate with them, and “he will follow up with [the officers].”

Early on, Block by Block private cops also were allowed to attend OPD daily lineups. According to notes from a December 2009 Uptown Association board meeting, OPD officers also have been receiving “weekly security updates” drafted by Block By Block’s Tarver.

Another means by which the Downtown and Uptown associations are “force multiplying” police and private security is through technology. Block by Block initially sought permission for its security ambassadors to carry OPD radios, but due to resistance from police rank and file, and because this could be a violation of the law, it was decided instead that OPD officers would carry Nextel phones used by Block by Block employees.

The next stage of this kind of “intelligence sharing” apparently will involve hand-held PDA devices developed by the Eponic Corporation. Former Oakland Police Chief Anthony Batts is listed on the company’s website as a supporter because while heading up the Long Beach Police Department his officers shared real-time information with Block by Block security guards there to track “quality of life issues such as panhandling” and enforce curfew laws against the homeless.

Previous ArticleHow Long Would It Take Mitt Romney to Make What You Make in a Year?

Next ArticleWednesday Must Read: OPD Must Now Report to Court Monitor; Swanson Drops Out of Senate Race